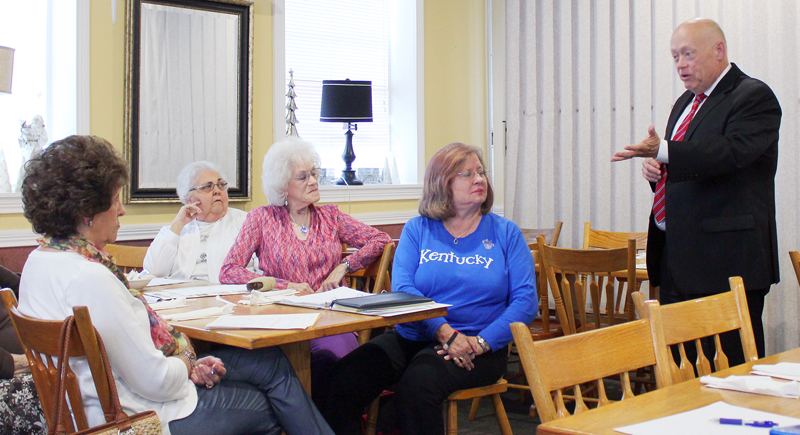 STANFORD – Substance abuse is the single greatest domestic policy issue that the U.S. faces today, according to one local circuit court judge, who said no other issue consumes as much of the population’s time or resources – including his own.

“Drugs basically consume my life,” Lincoln County Circuit Court Judge David A. Tapp told the Democratic Women’s Club June 8 at the Kentucky Depot Restaurant. “Every single day, of every single week, I have a parade of addicts which come into my court, some of which are on their way to jail or prison, but most of which are going right back out in the community with little in the way of meaningful intervention for their problem.”

Drug court is the one exception to the “anemic” local, state and federal response to the pressing policy issue, Tapp said.

Drug courts play a role in raising public awareness and providing treatment opportunites for individuals involved in the criminal justice system who are addicted, he said.

And drug court costs defendants and taxpayers nothing, he added. The program is operated by a team of volunteers which includes judges, court clerks, law enforcement and probation officers and GED instructors.

Tapp said the losses associated with substance abuse, aside from the number of deaths, cannot be calculated. Other costly issues that arise as a result of addiction include permanent injury or disease, long-term hospital admission, increases in worker’s compensation claims and insurance rates, abandoned educational goals and the “ever-growing criminal case docket.”

Out of the 2,966 drug courts around the world, the 28th Judicial Circuit’s program, which includes Pulaski, Lincoln and Rockcastle counties, was one of only 15 to receive the Community Transformation Award from the National Association of Drug Court Professionals.

The numbers don’t lie, Tapp said, as 75 percent of drug court graduates remain arrest-free for at least two years after completion and participants stay in treatment longer than any other forms of treatment.

“That’s simply because it’s far less expensive to treat people in the community than it is to send them to a prison,” he said.

“That’s a huge impact for us as taxpayers and another good reason why drug courts are an example of, and this comes very rarely, a government program that is not only effective, but it’s cost effective. We actually manage to save money in this program,” Tapp said.

Tapp pointed to a recent Courier Journal report titled “Rogue doctors exploit loopholes to let a powerful drug devastate a community” to demonstrate the rising trend of abuse when it comes to medically-assisted treatment that uses Suboxone and methadone.

“This article reinforced something that I have had a longstanding belief about and that is the use of Buprenorphine, known as Suboxone, or methadone in our community. I have strenuously opposed the use of those two drugs in our community mostly because I’ve not felt that they’re well-regulated,” Tapp said.

There is nothing wrong with the drugs themselves, Tapp added, it’s the way that they are employed and regulated – or not regulated.

Over the past few years, Suboxone has, at times, been the most commonly diverted drug in the state.

“What I mean by that…a legitimate drug taken from the legitimate purposes for which is to be used and given or sold on the street so somebody can get high or self-medicate,” he said. “We keep prescribing more and more Suboxone here in the Commonwealth of Kentucky.”

At times, Suboxone has been the number two drug paid for by Kentucky Medicaid tax dollars, he added.

“Think about that: the number two drug you’re paying for with your Medicaid tax dollars and yet, it’s the most common drug diverted into sales and use on the street – your tax dollars,” he said. “That’s just not good for Kentucky and it’s not good for people who are struggling with an opioid addiction.”

Tapp posed the question, “Why, if we’re having more and more Suboxone and methandone in our communities, why do these (overdose) numbers keep going up?”

In 2014, when no defendant in Kentucky was authorized to use Suboxone, there were 2,695 drug tests that returned positive results for Suboxone, Tapp said.

Following the recent arraignment of an Eastern Kentucky Suboxone clinic doctor, Attorney General Andy Breshear reiterated that substance abuse is the greatest threat to the state and noted Suboxone’s increasing role in that threat.

“Substance abuse is the single greatest threat to our Commonwealth,” Beshear said. “The wrongful prescribing of Suboxone is flooding our communities with yet another drug that is killing our children, destroying our families and scarring our neighborhoods. While there are honest, legal Suboxone clinics that provide real and needed treatment in our state, the rogue clinics who value money over lives must be shut down.”

It’s for those reasons that the local drug court program turns to a different drug for medication-assisted treatment: Vivitrol.

Suboxone and methadone are opiates themselves, though not as strong, while Vivitrol is an opiate-antgaonist, Tapp said.

Vivitrol, prescribed and administered by a doctor, blocks the body’s ability to get high from opioids or intoxicated from alcohol for 28 days.

Within the local drug court, Vivitrol is administered on a voluntary basis and is coupled with intensive counseling to address the psychological aspects of addiction.

The cost of Vivitrol was a concern in the beginning, Tapp said.

“When you compare it to the other forms of medically-assisted treatment, it’s not any more expensive than those,” he said.

That could change with the repeal of the Affordable Care Act – which provided Medicaid coverage to many for medication-assisted treatment, Tapp said.

“That poses huge problems for us,” Tapp said. “It is also covered by private pay insurance within the Department of Corrections as a result of the success of the program here in Lincoln, Pulaski and Rockcastle. As part of that big heroin bill a few years ago, they allocated $3 million for Vivitrol.”

It’s time to stop being “NIMBYs”

The community’s struggle with increasing drug addiction is one that can’t be ignored, he said.

Tapp said years ago when a 100-bed facility treatment was proposed to serve all three counties, the attitude toward the project was an unwelcome one.

“We call them ‘NIMBYs’ – Not In My Back Yard. ‘We don’t want those people in our community,’” he said. “This is a community thing, guys.”

Tapp said communities aren’t ignoring the problem anymore, but they’re not doing all they can. Drug court and Vivitrol are two available, effective options, he added.

“It’s a start,” he said. “Frankly, it all boils down to what we do as a community, what we do with our children as they’re being raised. This is a generational thing; it’s not going to disappear 10 years from now. We’re going to be here for a while.”