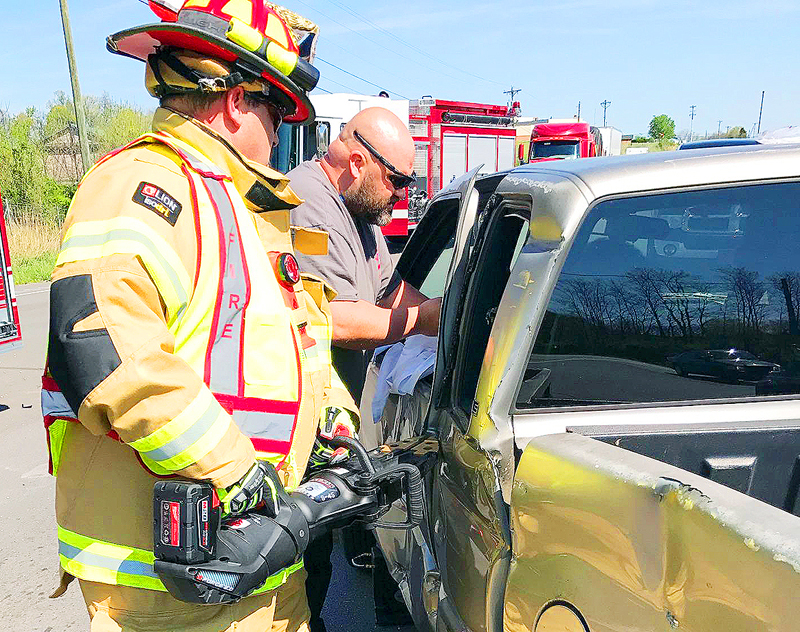 Photo courtesy of Stanford Fire Department Firefighters extricate a man from a vehicle after it collided with a Lincoln County School bus.

STANFORD – While the driver and students aboard a Lincoln County School bus were not injured during a collision earlier this month, the driver’s alleged inattention to a stop light caused the bus to collide with another vehicle – the occupants of which both sustained injuries.

That’s according to a traffic collision report received Monday this week from the investigating officer, Stanford Detective Tim Morris.

Lincoln County School bus No. 0204, driven by Jesse Harris, was eastbound on U.S. Hwy 150 on April 12 and carrying 39 Stanford Elementary students when it collided with a 2000 Chevrolet S10 pickup truck. The truck was driven by Gerald Robinson, 56, alongside passenger Cheryl Robinson, 57, both of 127 Center Street in Danville.

Harris was off of the bus and advised he was not injured and that no kids were hurt. School Resource officer Linda Cook took names of the students as Harris notified school personnel. A second bus transferred the students to the elementary school.

“Robinson and his wife, Cheryl, were still in the vehicle with possible head injuries,” Morris reports. “Bystanders assisted by keeping them from getting from the vehicle until EMS arrived. The Robinsons could not recall any details of the crash at the time.”

Morris said the pair had likely suffered head trauma during the collision.

Cheryl Robinson was removed from the truck first and transported to Fort Logan Hospital in Stanford while her husband had to be extricated from the vehicle before he was transported. According to Morris, both were still being treated medically for their injuries as of Monday, April 21.

Harris told police the traffic signal changed to yellow as he approached the intersection and by then Robinson’s truck was already across his lane so he swerved to miss it.

Witnesses on all four sides of the collision, however, told police the bus did not stop for what was already a red light and that Robinson had a green light. Two witnesses were stopped in the right eastbound lane when the bus failed to stop for the red light.

“Witness #5 was stopped behind unit 2 (Robinson) at the intersection of Spring Valley Drive and U.S. Hwy 150 due to having a red light. As the light (north-south) turned green, both units began into the intersection,” the report states.

Another witness confirmed that the school bus swerved left to avoid the collision and that Robinson swerved right before the impact.

Lincoln County Transportation Direction Donnie Leigh transported Harris to Fort Logan Hospital for a standard blood test as required by school policy and a grand jury subpoena was obtained for results of the test.

“I requested a second blood test approximately 45 minutes later, which Harris consented to,” Morris said. “This test was forwarded to the Kentucky State Police forensic laboratory for analysis.”

Morris said there were no indications of impairment.

The bus was driven to the transportation office where Stanford Police Officer Eric Taylor reviewed the onboard video which didn’t reveal any details of the crash.

“Donnie Leigh advised the bus was too old to have an onboard black box for vehicle information,” the report states. “A grand jury subpoena has been obtained for the video.”

Superintendent Michael Rowe said an investigation into the collision will be conducted by the state transportation department to determine the district’s response to the incident, but it appears that it was “human error.”

“The most important thing is that none of the kids were injured,” he said.