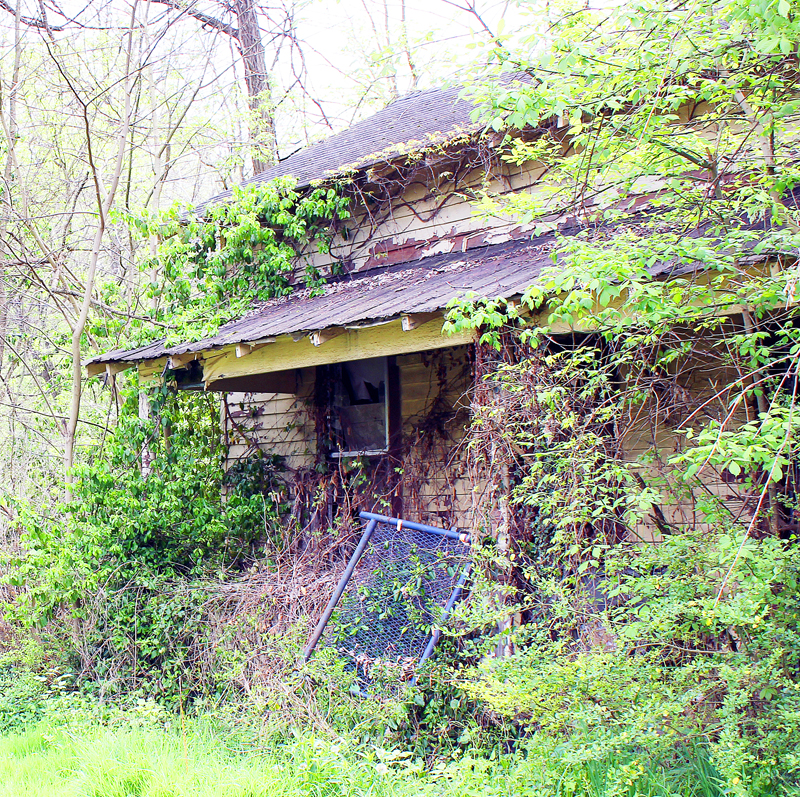 Photo by Abigail Whitehouse NO WILL is a common denominator when it comes to abandoned properties and estates across the county, according to the Lincoln County Property Valuation Administrator David Gambrel. When a property owner dies and no will is left, tracking down living descendants can at times be cumbersome.

STANFORD – Abandoned properties are more than just an eyesore – together they’re a wet blanket on the community around them that keeps property values deflated and tax money tied up.

It’s an issue that Lincoln County Property Valuation Administrator David Gambrel has had his heart set on fixing since he took office. But it’s no easy task.

Gambrel said when a property owner dies without a will in place, sometimes the task of tracking down the next living heirs can turn into a wild goose chase. More often than not, Gambrel said the owners of the abandoned estates found in the county today did not have a will when they died.

A prime example is the piece of dilapidated property that sits behind Stanford City Hall. Gambrel said it was previously owned by Jim and Anna Grace Reid – Jim died in 1988 and Anna died in 1995 – and no record of a will has been found.

As far as Gambrel can tell, the Reids had no children, which means the property would then go to their siblings – of which there are 17 combined.

“That’s 17 different splits on that one tract of property,” Gambrel said. “So that pie is going to be split 17 ways.”

But the split hasn’t happened and the property still sits. Gambrel said the property taxes were paid by a niece up until the death of Anna Reid and then the tax bill went into the care of her attorney.

In similar instances, Gambrel said ideally, descendants of the original property owner will sign an affidavit of descent that spells out their percentage of inheritance.

Another property located nearby, behind the PVA office, has also been deteriorating over the years as it remains vacant and unkept. Gambrel said the property was owned by George & Della Lackey Wollford before their death and he has tracked the building to a couple living people so far.

photo by Abigail Whitehouse
A property located on Main Street behind local offices deteriorates as the local PVA attempts to track down heirs and motivate them to address it.

“The problem is, you get in situations where it’s not easily definable who the heirs are,” he said.

Some abandoned properties or estates’ last ownership dates back more than 50 years and has yet to be resolved.

“There’s no structure on it but, we have a piece of property east of Crab Orchard that belonged to an African American Civil War soldier who died in 1930,” he said. “I doubt taxes have been paid on it. Sometimes neighbors will pay taxes thinking they can adversely possess that way. That’s a lawyer question, but my understanding of it is, you have only adversely possessed it when a judge says you’ve adversely possessed it. So you’re talking a law suit.”

That’s where the progress tends to halt, he said.

“That’s why a lot of this doesn’t get solved,” he said. “The only way to get that solved is a lawsuit because you have to sue the unknown heirs. You’re talking several thousand dollars and…what’s that property worth?”

Aside from having a negative impact on surrounding property values, abandoned estates are magnets for vandalism, he said. As PVA, Gambrel said he has the authority to enter an abandoned home if the door has been busted open to try to determine if the plumbing and/or electric has been ripped out.

“It’s a common thing,” he said. “That’s what happens in a heartbeat. It’s two-fold – they become abandoned and if people recognize they are abandoned that makes them susceptible to vandalism.”

The photos pictured along with this article are an example of an abandoned home in Broughtontown that was ransacked, with wires and pipes ripped from the walls.

“In some of these cases, family will pay the taxes to keep it from being lost but a lot of times tax lien companies will buy up delinquent taxes,” he said.

Gambrel said if tax lien companies were to purchase these properties, they would force the sale.

No taxes have been paid on a property located on Skyline Drive since the death of the owner in 1993, Gambrel gave as an example.

“He was not married. His sister had no children and predeceased him. His parents predeceased him…so this is a man that was born in the 1920’s and you have to go back to aunts and uncles,” he said.

Those are just some of the properties that sit empty across the county, but together they all have a negative impact on the aesthetic appeal of the community, the value of other properties and gives incentive for vandalism and other crimes. 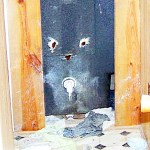 Photo contributed Vandalism of an abandoned property is shown on the wall and floor. 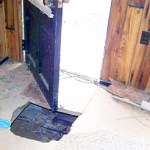 Photo contributed Damages left behind after an abandoned home in the county was vandalized is shown.

“It’s not one of those things that’s happening in a vacuum that doesn’t affect everybody else,” Gambrel said. “If you have property that should be worth $100,000 but due to the abandoned status it’s worth $30,000, who is paying taxes on that extra? Everybody else is.”

You can’t deny people due process, though, he said. Even if someone pays the taxes on a property, that doesn’t mean they have “fee simple ownership” or complete ownership of the estate, and therefore legally they can’t do anything to or with the property.

While estates with abandoned dwellings pose their own set of problems, there are also abandoned, land-only estates that over time, have been encroached upon by neighboring properties. Gambrel used a 180-acre abandoned lot in Kings Mountain that has lost about 60 acres to encroachment over the last 105 years due to encroachment.

“This is something I have tried very hard to get cleared up – these estates,” Gambrel said. Using census records to determine births, deaths and family members, Gambrel has tracked several properties as far as he could to find living heirs.

Not all of the estates are abandoned, he added, but if there are several heirs and one decides to bring suit, anyone living there would be displaced.

Gambrel said the problems can be fixed but it takes time. Last January, Gambrel tracked down the heir of an estate who was 97 years old and living in New York. The last deed to the property was from 1870.

“The analogy I give is it’s like eating an elephant: you can’t eat an elephant all at once, you have to do it a bite at a time,” he said. “So I’m trying to do that. It can be discouraging because it can be so difficult chasing people down.”

Some worthwhile incentives to clean up properties is what Gambrel said he would like to see in the future.

“There are some out there, but not enough to really provide a worthwhile incentive,” he said. “The only incentive is the fiscal court and city can put a moratorium on the assessments for those properties. I want to see people get full use of their property. People need to understand that ultimately, it is costing all of us higher taxes.”

Gambrel said he would like to see a community organization like Habitat for Humanity utilize some of the newer abandoned properties and said  it wouldn’t require much work and could provide a decent home.

Stanford Police: dog shot in back with firearm