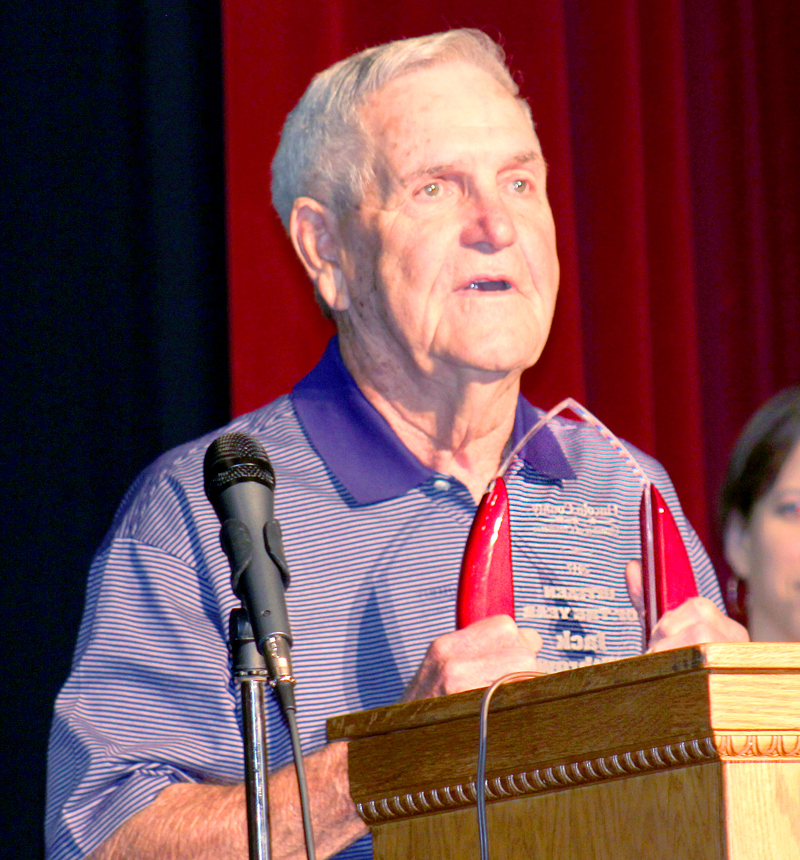 Photo by Abigail Whitehouse The 2017 Citizen of the Year, Jack Withrow, accepts his award during the annual Lincoln County Chamber of Commerce banquet.

STANFORD – There were tears in the eyes of many Tuesday night but they weren’t tears of sadness.

The annual banquet hosted by the Lincoln County Chamber of Commerce honored several Lincoln County locals Tuesday night, but not before highlighting some of the most fashionable shops around.

Stanford native and America’s Next Top Model runner-up, Laura Sioux Kirkpatrick, was the keynote speaker and shared many of the successes and obstacles of her modeling career. Kirkpatrick said she has always struggled with dyslexia and encouraged the audience not to discount kids who don’t always behave or perform well in school. 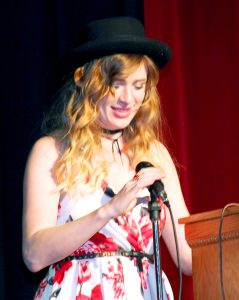 “…If you’re a teacher or you’re a parent or someone in the life of a student – just because they act up or they’re bad, doesn’t mean they don’t care. Sometimes it’s a cry for help. I have inspired thousands of girls with my story because of where I started,” she said. 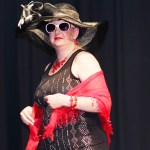 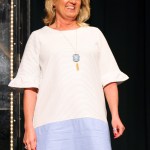 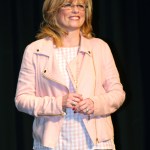 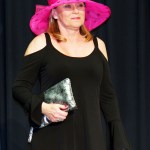 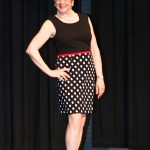 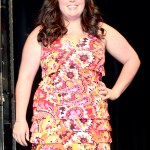 Photo by Abigail Whitehouse models clothing from The Village Shoppe.

The annual awards ceremony began with Martha Bastin behind the microphone as she introduced this year’s recipient of the June King Bastin Humanitarian award.

“This is always a mixed-emotional kind of night for me, remembering everything my mom did and then being able to give this award to someone who is equally as deserving,” Bastin said.

Mae Renner was this year’s recipient of the June King Bastin award and is someone who wants the best for everyone and gives selfishly of herself until she has nothing left to give, Bastin said. 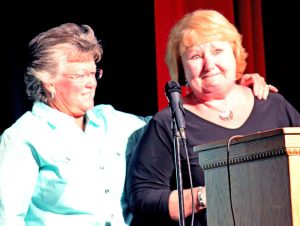 “There is nothing I can say but what could I say to follow in June King’s footsteps,” Renner said with tears in her eyes as she accepted the award.

At age 72, Eddie Reynolds still works hard every single day on the farm and is recognized as one of the most active farmers in Lincoln County.

“If you get a chance to visit with Eddie, he’ll definitely tell you about his purebred Gelbvieh cattle,” Stallard said. “Eddie’s cattle are still sought after today, especially in the show ring.” 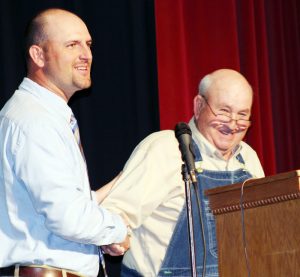 Reynolds, the president of the Lincoln County Cattlemen’s Association, accepted the 2017 Farmer of the Year award and joked with Stallard saying “I wish you would’ve warned me” as he had no idea he would be receiving the award.

Always pleasant to work with, even when called in the middle of the night or during his busy day – that is how Dr. Chris Sims was introduced as he received the 2017 Healthcare Worker award.

“I am deeply honored to be here tonight and receive this award,” Sims said. 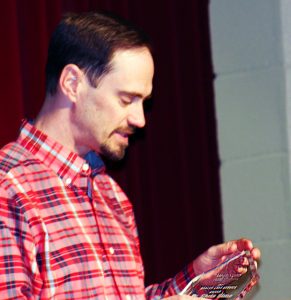 Sims thanks his family and friends for supporting his career, which is known to require long work days and odd hours, as well as his medical partners.

“I feel blessed every day to be able to do what I do, practice medicine, which I love, and to do it my hometown which clearly I love. I couldn’t think of anything better,” he said.

New to this year’s banquet and awards line-up was the First Responder of the Year award and it’s first recipient has served as a public servant for over 40 years, dedicating his life to the safety and protection of the citizens of Lincoln County and state.

Lincoln County Emergency Management Agency Director Don Gilliam has been recognized by the American Red Cross as having the most ‘disaster-ready’ county in the Bluegrass Chapter Area, has worked with local government to fund a county-wide emergency alert system for local residents and has served as an EMS technician, a Stanford City Police Officer, Kentucky State Trooper and Detective and much more. 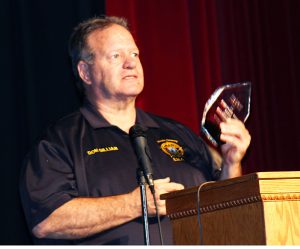 Gilliam has not only been recognized in a multitude of public safety arenas but he has molded Lincoln County’s emergency management and preparedness and executed multiple “mock disasters,” which now serve as a model for other agencies across the state and even the country.

“This isn’t about one person, it’s about a team – a team of teams that we have in Lincoln County that is better than any county and any agency I’ve ever worked around. You all know who they are, you see them every day and they all deserve one of these,” he said.

Fort Logan High School Principal Scott Montgomery was introduced as this year’s recipient of the Big Apple Award as Lincoln County Superintendent Michael Rowe welcomed him to the stage.

“Daily I see him advocating to students who have been exposed to tragedies or poor decisions that have rendered them unable to complete high school in a normal school setting. Many of these students would have dropped out of school were it not for his vision,” Rowe said. “There are countless cases where he has used his own finances to dress, feed and care for students who did not have family or the resources necessary for success.”

Montgomery said there are a lot of success stories that come out of Fort Logan High School.

“I’m just very thankful. I don’t know if I’ve ever won anything that meant this much,” he said choking back tears.
Chamber Director Andrea Miller introduced this year’s Business of the Year as a staple that has served the Lincoln County community for over 100 years.

“It has been described as the glue that holds our community together – politically, socially and financially,” Miller said. “Their value to our community is immeasurable. Their passion for our community is exhibited and reflected each week and the Lincoln County Chamber of Commerce is thrilled to present Business of the Year to The Interior Journal newspaper.”

Editor Abigail Whitehouse was joined by Advertising Consultant Lee Smith and Advertising Manager Carrie Shields as they accepted the award. 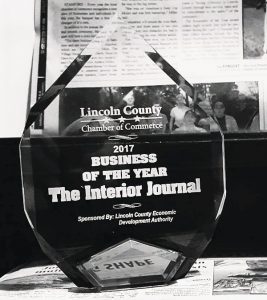 Photo by Abigail Whitehouse
The Interior Journal was named the 2017 Business of the Year by Lincoln County’s Chamber of Commerce.

“April 13 will mark my second year as editor of the IJ and I fall in love with Lincoln County more every single day and that’s because of people like you,” Whitehouse said.

The annual chamber event is one that recognizes many for their dedication to the community but one man’s continued dedication in various forms over the years earned him the esteemed title of Citizen of the Year Tuesday night.

“This year’s citizen of the year has been a wonderful asset to the community through his civic leadership…” said John David Friend. “There are numerous things we can say about this individual.”

Since making a home for him and his wife Wanda in 1954, Jack Withrow has spent countless hours volunteering with youth programs, city government and spiritual leadership in Lincoln County.

Withrow not has not only served on the New Beginnings United Methodist Church Board for 10 years, but he spent 23 years serving as a city council member in Stanford before becoming mayor and serving in that capacity for seven-and-a-half years.
In 2000, Withrow became a member of the Stanford City Water Commission and in 2004 became chairman of the commission. He continues to serve in that capacity today with four more years in his current term.

“Not only is he community minded but he is a great father, husband and grandfather,” Friend said.

Withrow said he was very grateful for the award and reminisced about moving to the area in 1954.

“We’ve had some great memories,” he said as he looked out over a crowd with many faces he has coached over the years.

Withrow told the story of how several years ago he caught the bandit responsible for throwing an egg at his car.

“I stopped my car, I hopped out and I heard our Sheriff Curt Folger say ‘oh my god it’s Mr. Withrow,” he said as the crowd erupted in laughter. “I won’t forget that one.”

Withrow said these days he is always going some place, whether it’s the water office, the cemetery, the country club or to work out.

“This is a wonderful place to live and I’m very proud of our town. I have a lot of wonderful memories.” 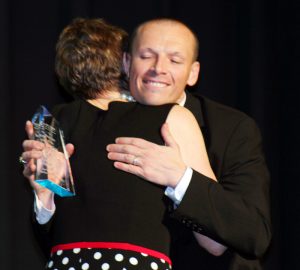