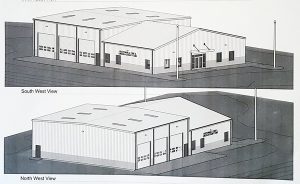 HUSTONVILLE – Designs of what will be the new Hustonville Fire and Emergency Services building now hang on the wall at city hall as the project moves closer to construction.

After receiving a $500,000 Community Development Block Grant in late 2015, the city began putting plans together for a new fire and emergency services station to not only serve Hustonville residents, but the west side of the county.

The decision to build a new station was made after West Lincoln EMS shut down, leaving the west side of the county in need of ambulance services.

While Lincoln County EMS is currently stationed 24 hours a day at the former McKinney Area Rescue Squad building, officials look forward to a more centralized station on the west end.

A $30,000 contribution from the Lincoln County Fiscal Court, in addition to the city’s initial contribution of $135,000 and another $186,000 in the form of a 40-year Rural Development loan together will help cover the cost of the project.

Mayor David Peyton said the total budget for the project is estimated at about $850,000 with administrative fees calculated into the approximate total.

The land on the corner of U.S. 127 and Main Street, where the building will be constructed, was appraised at about $120,000 and donated by First Southern National Bank.

After nearly two years of preparation, large prints of the proposed building designs created by the Lexington engineering firm Brand Stettor Carroll now hang on the wall at city hall.

From start to finish, Peyton told council members he estimates the construction project will take around 11 to 12 months to complete.

“We’re coming up to the time of year that the building should be up and under roof and in the winter time they can work on the interior finishing,” Peyton said during the regular March meeting.

According to the designs, the building will be split into two halves – one side for the fire department and one side for emergency services.

Both sides will have three restrooms each as well as a kitchen, living and dining area, storage and office space. The building will also have three large bays for emergency vehicles.

City council members, including those newly-elected, reiterated their support for the project.

“This is the most important project any of us will have dealings with,” Peyton said to the council in March.

As of the April meeting, Peyton said final paperwork was being sent and the next step will be for the city to request authorization to accept bids for the project.