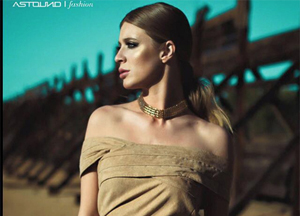 Photo courtesy of Laura Siouz Kirkpatrick Laura Sioux Kirkpatrick will be the keynote speaker during the Lincoln County Chamber of Commerce’s annual awards banquet in April.

STANFORD – Every year the local chamber of commerce recognizes a new slew of businesses and individuals but this year, the banquet has a few new changes of it’s own.

In addition to the annual dinner, raffle and awards ceremony, this year’s banquet will host a mini-fashion show.

“The three businesses that carry fashions and are members of the chamber, which are  Morgan’s on Main, The Village Shoppe and The Derby Shop (In Danville), will each have two models,” said Chamber Director Andrea Miller.

The fashion-oriented theme “A Model of Success” is centered around the event’s keynote speaker, Laura Sioux Kirkpatrick, a Lincoln County native who followed her modeling career all the way to the big screen.

“She was on American’s Next Top Model and was first runner-up,” Miller said.

Kirkpatrick will emcee the mini-fashion show and share some of her own personal story and obstacles she had to overcome along the way, Miller added.

For the first time ever, the Lincoln County Chamber’s annual banquet will also recognize a “Responder of the Year.”

Miller said the new award will be sponsored by Farmer’s Bank and according to the nomination form, seeks to honor a first responder who has “gone above and beyond the call of duty” and made a “lasting difference in Lincoln County through their service, valor and/or commitment to the safety” of the community.

The Responder of the Year award makes eight awards that will be presented during the April 11 banquet this year. Other awards include the Big Apple; Healthcare Service; Outstanding Farmer; June King Bastin Service to Community; Humanitarian; Business of the Year; and Citizen of the Year.

The Lincoln County Cattlemen’s Association will provide a meal prior to the program and a variety of raffle items will be on display during the social hour, Miller said.

A total of 30 raffle tickets can be purchased for $25, she added.
“This is our largest fundraiser of the year,” Miller said. “We don’t receive any actual money from the city or the county.”

The chamber’s board of directors are all volunteers, as well, and funds generated by the annual event help the group promote Lincoln County businesses throughout the rest of the year.

Tickets to the banquet program are $30 and are available at the following locations: First Southern Bank’s (Vincent Drive location), Patriot Petals, Kentucky Soaps and Such, Farmer’s Bank, Durham’s Grocery and PBK Bank.