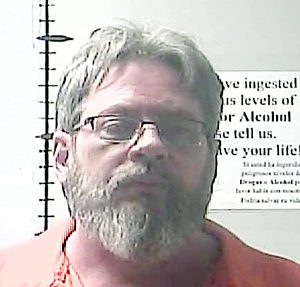 WAYNESBURG – A Lincoln County man was arrested after a three-hour standoff with police last Thursday night.

What began as a response to a domestic dispute turned into a three-hour standoff with multiple law enforcement and resulted in the arrest of 52-year-old Jeffery A. Burton, of Waynesburg.

Sheriff’s Deputy Rob Oney responded to the initial call, according to Sheriff Curt Folger, but when he arrived at the home on Old Somerset Road near Pleasant View Baptist Church at about 8 p.m. last Thursday night, he heard two shots fired.

“I received a call that the subject’s husband (Burton) was tearing the house up and was out of control and needed someone to come up there,” Folger said last Friday during a phone interview.

“Oney attempted to get her in a safe area, not knowing what was going on, and (Jeffery) Burton went back into the residence,” Folger continued. “At that time we didn’t really know what we had or what was going on.”

It was during that time that Folger said other local law enforcement and state police became worried.

That’s when the Lincoln County Emergency Services Unit was activated and set up a perimeter around the home, he said.

The situation was then turned over to Kentucky State Police, who had also responded to the scene.

It was more than three hours later when KSP was finally able to enter the home to find Burton asleep in a lounge chair, Folger said.

Folger said the 52-year-old has been suffering from medical issues for several years and has struggled to find the proper treatment he needs.

“This subject has had some very severe pains in the last few years,” he said. “The pain is coming from a medical condition where he isn’t actually getting any help. These people are really, really good people, though.”

It was about 11:30 p.m. when law enforcement cleared the scene.

Folger said no injuries were reported.

“The main thing is (that) no one was hurt. This was resolved in a very safe and good manner so that no one was harmed,” he said.

A $10,000 bond was set for Burton, who has since been released from custody, according to jail records.

Following the incident, Folger said he hopes Burton is able to get the medical attention he needs.

“That might be the start for him to get help,” he said.