Photo contributed Contestants competing in the From the Bottom of Our Pageant. 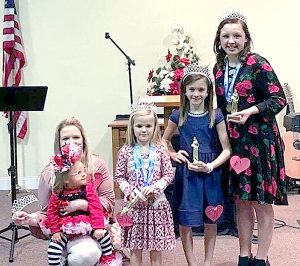 On Saturday, Feb. 11, the From the Bottom of Our Heart Pageant, was hosted by the Our Superman Relay for Life team to benefit Lincoln County Relay for Life.

The four will advance to the Kentucky State Festival Pageant in November.