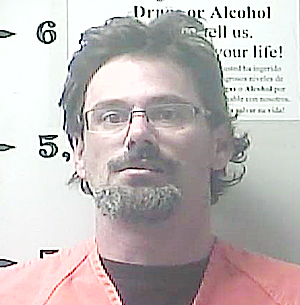 STANFORD – A Florida man labeled a fugitive was arrested during a traffic stop Monday night.

Steven Collins, 36, of Mount Vernon, was arrested by Sheriff’s Deputy Chase Marcum who said he began observing Collins’ vehicle on Vincent Drive at about 8:45 p.m. due to careless driving.

A traffic stop was initiated and a search of the vehicle turned up about 11 grams of marjuana and about one-half of a gram of methamphetamine, according to Marcum.

The suspected narcotics were located in the driver’s side door compartment in a Marlboro Reds cigarette pack.

Marcum said Collins’ girlfriend and her daughter were in the vehicle but were released.

The man – also wanted on warrants out of Madison and Rockcastle counties – was labeled a “violent” fugitive from Florida with previous drugs charges, as well as a charge for assaulting an officer, Marcum said.

Collins was lodged in the Lincoln County Regional Jail. No bond had been set as of Wednesday morning.