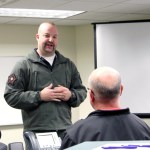 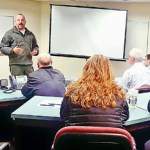 STANFORD – Those are the three main choices of action when faced with an active shooter situation, according to Lincoln County Sheriff’s Sgt. Ryan Kirkpatrick, who gave a brief presentation to local PBK Bank staff Monday morning.

While the typical active shooter training class is about four hours long, Kirkpatrick offered a condensed version of the class to bank staff this week to better prepare them for the future, if an active shooter incident were to arise.

The most important key is to have a plan before that ever happens, Kirkpatrick said.

“Having a plan, paying attention to your surroundings and just deciding what you’re going to do,” he said. “Asking yourself, ‘what options do I have if that person makes it through the barricade?’”

It’s important to understand how local law enforcement will respond and to include them in your planning as well, he added.

Kirkpatrick walked bank employees through each of the three responses, which he said can vary in execution.
“Hide doesn’t always mean crouching down behind a desk, but it can mean that,” he said. “Sometimes that ‘out of sight out of mind’ thing works really well because, like I said, the shooter is usually looking for easy targets.”

Law enforcement recommends that you not only hide, but barricade yourself, if possible.

“There are little things you don’t think about – in public places almost every door has a door stop. What would that door stop do behind the door? If it’s on the side you’re on and wedged under the door, it’s going to make it a little harder for them to get to you,” he said.

When it comes to fighting, do it in numbers.
“It’s really what’s in you that makes that work,” he said. “Are you ready to fight for your life and the life of your coworker and what are you going to do?”
If you choose to run, there are techniques to increase the probability of success.

Everybody knows it’s hard to hit a moving target, Kirkpatrick said, but if you run from a shooting in a straight line, you’re an easier target.
“If you zig-zag back and forth, you’re harder to catch,” he said. “When you run, you want to stay about two feet away from any wall. Stray rounds will bounce off walls while shooting is going on.”

While there are several ways to respond to an active shooter situation, Kirkpatrick said paying attention to your surroundings and considering your options ahead of time will increase your chance of surviving such an incident.

Kirkpatrick said schools and businesses have been practicing for potential fires and other natural disasters for years but there is little planning or practice for active shooter scenarios.

“If we have the percentage of people killed by fire down to zero, why are we not practicing for a shooting?” he asked. “There are usually very few people who actually get hurt in a fire in the workplace. For the most part, everybody practices and everybody knows what their plan is and it’s engrained in you.”

The class provided by Kirkpatrick is designed to make people proactive about a situation that could happen anywhere, he said.

“Hopefully you take away something that will help you in the long run,” he said. “And hopefully in 20 years, you will say ‘that was the most boring 45 minutes of my life, I never used anything that guy said.’”