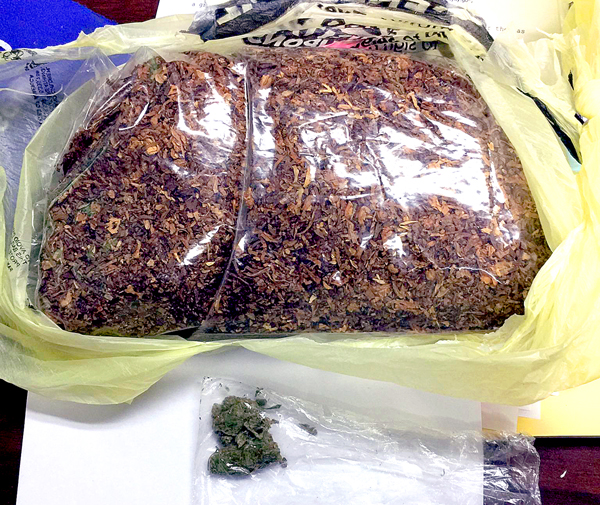 Photo contributed Lincoln County Regional Jail staff discovered a large back of tobacco, as well as a smaller bag of marijuana, during a perimeter check on Jan. 27.

While conducting a perimeter check outside the Lincoln County Regional Jail, Deputy C. Tinnel discovered approximately one pound of tobacco hidden, according to information provided by Jailer Rob Wilson on Jan. 27.
Wilson said the tobacco was discovered last Friday near a dumpster located at the back of the jail.
As Tinnel continued his security check, he found two large pieces of marijuana in a plastic bag in a trash can at the entrance of the facility.
Wilson said both areas have video surveillance cameras and will be reviewed.

Tobacco, pills found in body cavity during search
Sgt. L. McCullough was conducting a search of a female inmate during the booking process and observed a “suspicious item partially concealed in the body cavity of the inmate,” according to information provided by Jailer Rob Wilson on Jan. 27.
In the suspicious item was tobacco and 15 Seroquel 50 mg pills.
The contraband was seized and the inmate was charged with first-degree contraband.

K9 Django impresses constable during traffic stop
Constable Rob Adams said when he made a traffic stop on Jan. 28, LCRJ’s K9 drug detection unit Django was called out.
Adams said he pulled over a vehicle for speeding on U.S. 150 near Bluegrass South Stockyards when he smelled a hint of marijuana coming from the car.
A drug detection K9 was requested and LCRJ Chief Deputy Robin Jones and his K9 Django responded to the scene to alert whether there was a presence of drugs in the vehicle.
Jones told the driver and passenger to roll up all windows and shut all doors.
“Robin takes him (Django) around the car and he stops over on the passenger side by the wheel and looks at Robin,” Adams said.
Django was taken around the car a second time and stopped again at the passenger-side door, but this time he gently bit the car door handle and then looked at Jones.
The passenger was asked if there was any marijuana on their person, which they admitted to having a small amount.  Adams said since it was such a minute amount (much less than half of a gram), the bit of marijuana was destroyed and a ticket was written for the speeding – but what impressed him was the fact that the K9 was able to pick up on it.
“It impressed me the way he looked at Robin,” Adams said. “Where it was so windy out too, if he can find that he can definitely find the bigger stuff.”
Adams said normally Stanford’s K9 unit Nico would have responded but it was after the handler’s shift and he was probably catching up on sleep.
It was the first time he had really seen Django in action and it left quite an impression, Adams said.
“I appreciate Rob Wilson for furnishing the dog,” Adams said. “We are all in this together.”