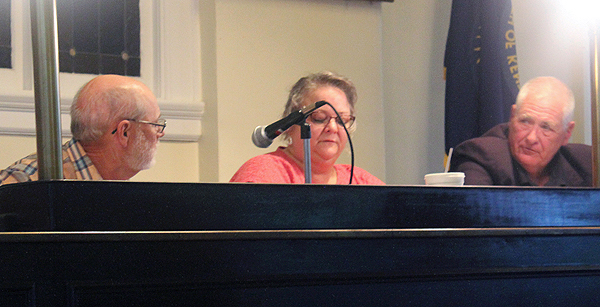 STANFORD – The Lincoln County Ambulance Board is seeking legal representation to help construct a set of bylaws for the board and address concerns from a resident about the legality of the property tax increase last year.

Chairman Jerry Shelton told the board during the January meeting that an attorney he previously contacted would not be able to work for the board and that he had attempted to contact Steve Dexter, an attorney in Danville.

“I called him several times to try and have an answer for this meeting but the receptionist said if he’s interested, he’ll return your call,” Shelton said.

During the last few meetings, Lincoln County resident Dennis Miller has voiced his concerns with the legality of the ambulance board’s five-cent increase in property taxes, which they voted on in August last year.

Miller has voiced four reasons why he believes the ambulance board’s vote was illegal: The vote on Aug. 11 didn’t allow 45 days for recall ballot, it only allowed 26 days; the required public hearing is supposed to be held no less than seven days and no more than 10 days following the public hearing and the board violated by voting only five days after the hearing; and the newspaper advertisement required to run two consecutive times at 12 column inches only printed once and measured eight inches.

The board agreed to seek a legal opinion regarding the issues raised by Miller but has yet to find an attorney willing to take that on, as well as the drafting of bylaws for the board.

“This board made a commitment to pursue this. We had one attorney that didn’t’ feel like he could handle it and so I would have to speak against a motion to table simply because I believe we have already made a commitment to deal with that,” said Vice Chairman Bob Floro. “I know Steven Dexter and could give him a call.”

Board member Billy Phillips said he agreed that the board made a commitment to answer Miller’s questions and he would like to see the issue resolved.
“I don’t want to leave this hanging,” he said. “We promised the man we would give him an answer.”

Miller told the board he wants them to admit they broke the law or he will seek legal action.
“Pay back the money and do it properly and I can walk away,” Miller said.
Board member Naren James made a motion for Floro to contact Dexter and inquire about other attorneys if he is not available to see about the issues that need to be resolved. The board voted unanimously to approve the motion.
“We acted on the basis of advice from the judge-executive,” James said.

Lincoln County EMS Director Ashley Powell said local attorney Jonathan Baker is drawing up the agreements to be sent to each service for review and then negotiations will begin.

Powell said within a month he expected the contracts to be sent out to the services and negotiations to begin at that point.
“Once all of those are signed, the current board of Lincoln EMS will modify bylaws to bring in the other board members (as discussed in the original proposal). Once that is done, we will move to sign the contract with the ambulance board.”

The board voted unanimously to set aside all excess money received as a result of the tax increase and disburse funds at regular amounts until the consolidation process is completed.

In other business:
• Disbursed $160,000 to the ambulance services: Waynesburg Area Rescue Squad and East End EMS received $35,000; Lincoln County EMS received $70,000; and $20,000 was given to Medic One. That leaves $9,000 leftover from last year’s funds.
• Board member Larry Yantz has not been present at ambulance board meetings
• Floro inquired whether board members have signed and returned copies of the Kentucky Attorney General’s “Your Duty Under the Law” regarding open records and meetings law. Board members agreed to return all copies by the Feb. 20 meeting.