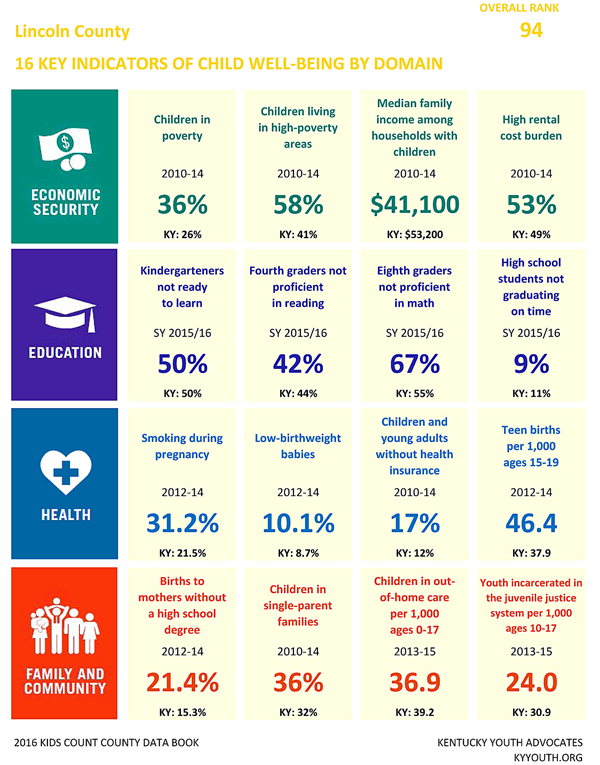 For Lincoln, it’s a slight improvement from last year’s data which ranked the county 96 in the state for overall child welfare – but it remains the highest ranking compared to all five surrounding counties.

The rankings compare child well-being levels across counties from one to 120, with one being the best. The data and rankings are released by Kentucky Youth Advocates.

The data shows about 36 percent of Lincoln County children live in poverty, which is the same percentage reported in the 2015 Kids Count data.

An estimated 26 percent of children across the state live in poverty.

The 58 percent of children living in high-poverty areas is a slight improvement from last year’s 70 percent. The median household income rose $100 from last year’s $41,000 average and the high rental cost burden dropped by one percent.

High rental cost burden is defined as “the estimated percentage of renter occupied housing units in which 30 percent or more of monthly household incomes was spent on gross rent (the cost of rent and utilities),” according to the 2016 Kids Count book.

The percentage is the same as the state’s overall estimate.

The numbers reflect the percentage of all screened incoming public school kindergarteners who do not meet readiness-to-learn standards including adaptive, cognitive, motor, communication and social-emotional skills.

The 2016 data shows a minor increase in the number of eighth graders not proficient in math from 64 percent last year to 67 percent this year.

The number of high school students not graduating on time rose from five percent to nine percent in 2016.

The rate of smoking during pregnancy remained at a stagnant 31.2 percent in both the 2015 and 2016 Kids Count data while the percentage of low-birthweight babies increased by .1 percent.

Data shows about 17 percent of children and young adults in Lincoln County are without health insurance compared to last year’s 18 percent.

The percentage of births to mothers without a high school degree decreased by .7 percent from last year’s 22.1 percent, according to the data book.

The number of children in single-parent families increased from 33 percent last year to 36 percent this year.

Kids Count is part of the Annie E. Casey Foundation’s nationwide initiative to enhance the discussion about the future for all children on all levels of government by providing and tracking relative data.

“KIDS COUNT brings us the facts,” said Terry Brooks, executive director of Kentucky Youth Advocates in the 2016 Kids Count book foreword. “Let’s face the facts and grow together to make Kentucky the best place in America to be young for all children…”