A look back at 2016 in Lincoln County 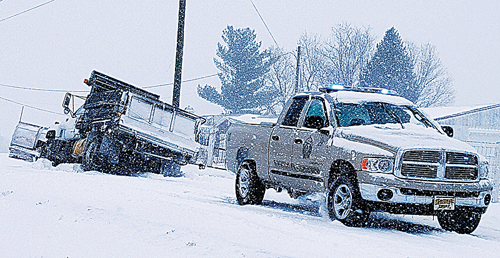 With another year soon coming to a close, this week, The Interior Journal is revisiting some of the biggest Lincoln County headlines from 2016.
While we can’t publish all of them, there were many important news stories this year. Here is a look at a few big stories from 2016: 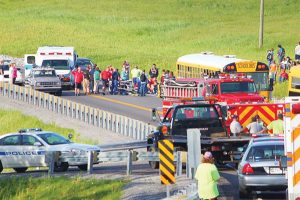 Lincoln bus-wreck suit
settled for $1.25 million
A wrongful death lawsuit filed against Lincoln County school officials by the father of a man who died after a 2014 collision with a school bus was settled and dismissed. While the terms of the settlement were not disclosed in the court file, a copy of the release and settlement agreement was obtained by The Interior Journal of Stanford through an Open Records request to school board attorney Jonathan Baker. In the agreement, Lincoln school officials will pay William Boyd Coleman, Sr. — whose 36-year-old son, William Otis Coleman, died after a Lincoln County School bus crossed the center line on Ky. 78 and struck his pickup truck — $1.25 million in damages.

SNOWED IN
Lincoln County road crews worked tirelessly digging the county out of more than a foot of snow that was dumped across the region in February.
Emergency Management officials urged residents to stay off the roads as they worked to get them cleared and safe for travel. It took a few days to get out from under the average 14 inches of snow that fell and snow drifts piled 7 to 8 feet high in some areas. 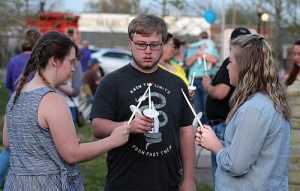 Photo by Abigail Whitehouse
Friends of Jenna Caudill light a candle in her honor during a vigil following her death from an apparent drug overdose.

Family, friends speak out about
woman’s battle with drug addiction
An eight-month battle with heroin addiction claimed the life of a 22-year-old Lincoln County woman in late February.
Jenna Caudill, of Waynesburg, died Feb. 29 of a drug overdose in a home in Lancaster. A candlelight vigil in honor of Jenna Caudill was held April 16 at the Stanford L&N Depot. Candles were lit in her honor and a march down Main Street was organized as locals walked hand-in-hand and vowed to fight the community’s growing drug problem. 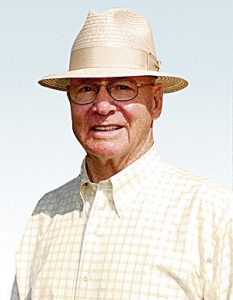 Ward Correll dies at 88
Ward Correll was hospitalized March 9, after an accidental gun discharge at his home, The Commonwealth Journal in Somerset reported in early March.
The 88-year-old was taken to the University of Kentucky Chandler Medical Center with a single gunshot wound to the abdomen, according to UK Trauma Surgeon Dr. Cynthia Talley. The Somerset-Pulaski County Chamber of Commerce issued a statement online Friday, noting that Ward Correll was awarded the 2014 Distinguished Community Service Award, the highest award the chamber offers.
“Ultimately, it is difficult to describe Ward Correll — self-made man, consummate businessman, a generous philanthropist,” the chamber’s statement reads. “However, it might be easier to emphasize Correll’s Christianity. With his Bible close at hand on his desk, he was always ready to share the impact faith has had on his life.”
“Ward Correll truly is a testament of a life lived in faith.” 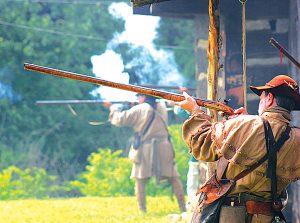 Photo by Abigail Whitehouse
While Native Americans attack from the treeline, men aim their guns and fire as they defend Logan’s Fort during the reenactment of the Siege of 1777.

Logan’s Fort comes to life
during first-ever reenactment
The end of Martin Luther King Street in Stanford was like walking through a time portal into the 18th century last May as the first-ever reenactment of the Siege of 1777 at Logan’s Fort brought history back to life. From living history demonstrations to educational seminars and interactive, primitive camps, the weekend was packed with events surrounding the lives of locals in 1777. 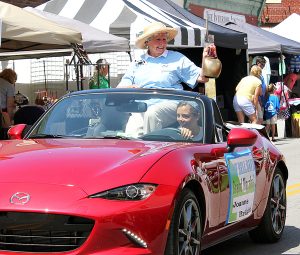 Photo by Abigail Whitehouse
Cow Bell Days Grand Marshall Joanne Bright rings her cow bell as she makes her way down Main Street in the grand parade on June 18.

COW BELL DAYS
Cow bells were heard throughout downtown Stanford in June as the first-ever Cow Bell Days Festival brought in a crowd of visitors, vendors and many more activities. The festival began with a dinner Thursday night on Main Street, live music and activities Friday night and a parade and rubber duck race on Saturday. 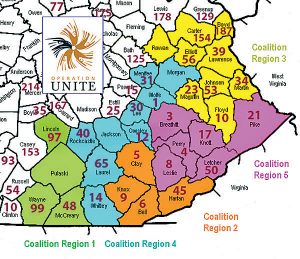 CDC report: Lincoln at risk for
needle-borne outbreak
Lincoln County ranks 97th out of 220 counties in the United States identified as being most vulnerable to outbreaks of HIV and hepatitis C due to intravenous drug abuse, according to a preliminary report by the U.S. Centers for Disease Control and Prevention (CDC).
The growing use of heroin and the abuse of prescription painkillers in Kentucky also mean that the state “is being ravaged by the diseases that follow in their wake: hepatitis and HIV. These dangers also reach far beyond addicts and their families, threatening a wide swath of the population,” Laura Ungar reports for The Courier-Journal.
Kentucky has one-fourth of the 220 U.S. counties that the CDC had judged to be at high risk for outbreaks of HIV and hepatitis C among intravenous drug users, Ungar notes in the second installment of a three-part series on heroin in Kentucky and adjoining states.
The number of hepatitis C cases in Lincoln County has increased some, according to Lincoln County Health Department Director Diane Miller.
“We do have several Hepatitis C cases. We have a bunch, but some of them are chronic cases,” Miller said. “I do think drug use and abuse contributes to some of the increase.”
While the number of cases of hepatitis C have increased in Lincoln County, Miller said she has not seen any notable increase in the number of HIV patients. The Lincoln County Health Board is currently seeking information about syringe exchange programs implemented in various places across the state.

Hustonville City Limits
Issue Resolved
After nearly two years of debate over city limits, Hustonville City Council members are preparing to rescind a 1981 survey and reinstate a 1983 survey – a resolution to the boundary issue that both city council and community members are eager to reach.
The boundary line was brought into question in 2014 after state highway employees came to place memorial highway signs and discovered the city limits sign was not where it was supposed to be in accordance with the state database. State workers moved the sign to match the data from the Secretary of State’s office.
When City Attorney Jonathan Baker set out to determine why the city and state data differ, he found that former Mayor Eugene Hafley and the city council at the time (early 1980’s) had defined city limits as a circular, one-half mile radius from the traffic light on Ky. 78.
If the city had decided to bring city limits in line with the state office’s information, a handful of property owners would have been added to the tax roll but during the council’s Aug. 2 meeting, Baker said he found a resolution that he believes will satisfy all parties involved, including the property owners.
After communicating with the Kentucky League of Cities as well as the Secretary of State’s office, Baker recommended that the council rescind the 1981 survey of the city and reinstate the May 1983 survey.
“We are going to basically make a resolution stating that was the boundary line as of 1983 and therefore maintaining all other annexations, you know, the Hafley, Huston Point, Wilcher properties – all those that go along with the May 1983 boundary line,” Baker said.
Since August, a new map has been drawn and the issue has been resolved. 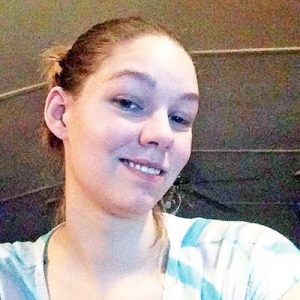 Body of missing Boyle woman
found in Lincoln woods
The body of a missing Boyle County woman was found on West Skyline Drive in Lincoln County on Oct. 1 by a group of ATV riders but how the woman died and how her body got there are still questions that remain unanswered.
Lincoln County Deputy Coroner Brian Jenkins confirmed that woman was 22-year-old Desiree Sparks who was reported missing in Danville on Sept. 27. Kentucky State Police is overseeing the ongoing death investigation. KSP asks anyone with information to contact Post 7 in Richmond at (859) 623-2404. 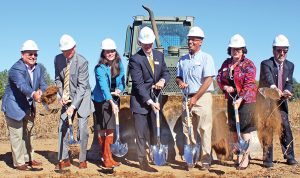 Photo by Abigail Whitehouse
State and local officials join to break ground on a new innovative greenhouse operation in Stanford.

Stanford welcomes innovative
greenhouse operation
Talks of a large greenhouse operation, and the potential 75 job openings accompanying it, began about two years ago but in October, state and local officials were eager to put their shovels in the dirt and officially break ground on the future home of Kentucky Fresh Harvest.
Founded in Lincoln County, Kentucky Fresh Harvest (KFH) is owned by Kentucky Hi Tech Greenhouses (KYHTG), LLC, as well as a group of local investors who collaborated on the project to bring jobs and innovative agriculture to the community.
The $10.7 million dollar investment is an innovative greenhouse operation, which is expected to produce up to three-and-a-half to four million pounds of cherry tomatoes in one year.

Other 2016 stories include: former Lincoln County Superintendent Karen Hatter announced her resignation after serving 33 years in the Lincoln County School District; the Stanford Police Department acquired a new K9 unit named Nico. Nico was purchased with the help of community donations; The Lincoln County Regional Jail acquired a drug detection K9 named Django. Lincoln County Republicans voted in the state’s first-ever presidential caucus in March and Sen. Rand Paul, a presidential candidate at the time, hosted a town hall forum in Stanford; the first phase of the Hustonville water project was completed in March; Ephraim McDowell Fort Logan Hospital became the first in the state to offer an alternative option for pain relief to women in labor in the form of nitrous oxide – more commonly known as “laughing gas”; Lincoln and Garrard County officials cut the ribbon on a new Emergency Operations Center in Lancaster; the Lincoln County Extension Office said goodbye to two longtime employees – Ag and Natural Resources Agent Dan Grigson and Lissa Albright; Lincoln County’s ambulance services consolidated under one name, Lincoln County EMS; the ambulance board voted to raise the tax rate from 4.8 cents per $100 of assessed property value to 9.8 cents.
That still doesn’t cover all of the important news reported this year, but we thank you for reading along with us and hope you continue to as we journey into 2017.