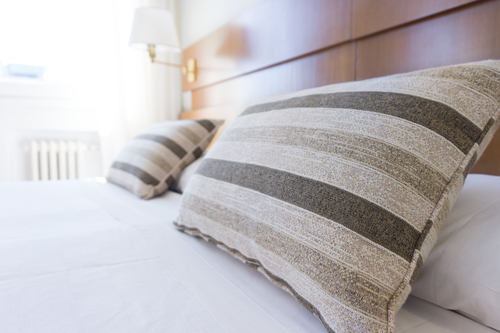 CRAB ORCHARD – Thanks to a combined effort of some Lincoln County churches, there will now be not one, but two homeless shelters in the area – one for men and one for women.

Unto Me, a co-ed homeless shelter located at 55 Cutoff St. in Stanford, was opened by the Lincoln County Baptist Association and the shelter took in its first residents October of 2015.

“Our mission is to provide temporary housing for individuals that are homeless and to give them some direction in how they can overcome the situation in their lives,” said the association’s director of missions, Gary King.

The shelter’s name was inspired by the Bible passage, Matthew 25:40, he said.

King said the shelter was informed in August that they would have to make the facility a single-gender shelter for insurance purposes.

“At the time it was a male and female facility – separate rooms with secured locks on each room and a court major there at all times,” King said. “Our insurance in August of this year, due to a liability suit of another shelter that they have, would no longer insure (us) with male and females on the same property.”

The decision was made to make Unto Me a male-only facility since the house coordinator of the shelter was male. King said the baptist association began to pray for a location to open a women’s shelter. Their prayers were answered when the Watts Chapel Baptist Church in Crab Orchard accepted a lease agreement with the association to allow them to use the chapel’s parsonage.

The parsonage needed some repairs but King said they had plenty of help from volunteers all over the state to help get the place into shape to use as a women’s shelter. Soon after donations of furniture, a washer and dryer and other shelter needs were brought in. The shelter will be able to house six residents as well as a female house coordinator.

Like Unto Me, the name for the women’s shelter was inspired by a Bible passage, Ephesians, 2:8-9. The shelter was named By Grace.

“For by grace are ye saved through faith; and that not of yourselves: it is the gift of God. Not of works, lest any man should boast,”  is the full passage, according to the KJV.

King said the plan for the women’s home is to use the same guidelines as they do for the men’s home.

Guidelines require incoming residents to be cleared by law enforcement to make sure there aren’t any outstanding warrants; Alcohol or use of tobacco products are prohibited on premises or surrounding properties; no pets or animals are allowed; no public displays of affection; residents are to leave their space as found; space is limited, therefore unnecessary clothing and personal items can’t be brought into the home; personal items are never to be left in common areas (TV room, kitchen, bathrooms); everyone is responsible for themselves; and at least one church service must be attended on Sundays (a resident can go to any church of any denomination of their choosing).

The residents also have to follow a curfew. King said the residents are expected to be in the shelter with lights out by 11 p.m. and the doors don’t open again until 6 a.m. The exception to this is if a resident is working night shift, King said.

At this time only ages 18 and up are permitted to stay in the shelters.
King said he’s had residents from 18-year-old to people in their 70’s but the average resident is usually in their 40’s.

His ultimate dream, King said, is to build a shelter for families in the area, however, the women’s home will accept pregnant women depending upon how far along they are. If they aren’t very far along and have not had many complications, they will be able to stay at By Grace. If there are health risks though, they can’t permit them to stay as the shelter is not equipped to take care of physical needs.

Residents will be evaluated every 14 days by the board to measure their progress. Those staying at the shelter are expected to show effort of trying to better themselves. They’re expected to follow job leads if they’re provided to them and even gather signatures from employers to show that they have applied for jobs.

“We expect to see progress,” King said. “It’s not permanent living. They’re going to have to move on. They can’t just sit around all day and do nothing. They have to at least apply themselves and try.”

Several of the pastors or other volunteers can help residents complete resumés or other things needed to obtain a job, King said. They will even try to go to Goodwill to obtain clothing for interviews if needed.

“What we try to do is team an individual up with a pastor or somebody in a church and let the church come around them, support them, love them and build a relationship with them,” King said.

A local group called the Tuesday night Lincoln County Jail Ministry Team is also eager to welcome the new women’s shelter and hopes to help the efforts. A statement from the group states the group works together to take Jesus to the jailhouse.

“We know he can do the same for the women inmates we come to know and love every Tuesday evening,” the group stated. “This home is truly a blessing because we have something more to offer these women who truly want to begin building their relationship with the Lord, who want the new life he has to offer.”

The group has been praying for some time for a women’s home so that female inmates have a place to go when leaving jail.

“We’re all excited and thankful for the home,” the statement reads.

As the association prepares for By Grace’s grand opening Dec. 18, King said they are still welcoming financial donations to help get the shelter started. The shelter takes approximately $350 to $400 a month just to pay general expense, King said.

Several churches, individuals and business make donations to help keep the shelter running. However, By Grace is in need of financial support to help pay for utilities, transportation and possibly even internet connection.

With Unto Me being in Stanford, they have access to the library, to the store or even the local division of motor vehicles to get a driver’s license. With By Grace being in Crab Orchard, transporting the women from doctors visits, the store and job interviews will be one of the shelters biggest needs, King said.

King’s hope is that a van will be donated or even some churches or volunteers offer to help transport the women. He said he worries fuel cost may begin to be a problem too.

The lack of access to internet for the women to research job opportunities is another hurdle the shelter will have to jump. King said the shelter would appreciate anyone who would be willing to help By Grace with internet bills also.

“We’re stepping out on faith that it’s all going to work out,” King said. “This is the door God opened and he’s not going to open it without providing for the needs we have to make it work.”

SO YOU KNOW:
Anyone interested in making a donation or more information about the shelter can contact the Lincoln County Baptist Association at (606) 365-7123 or by email at dom@lcbaky.org.