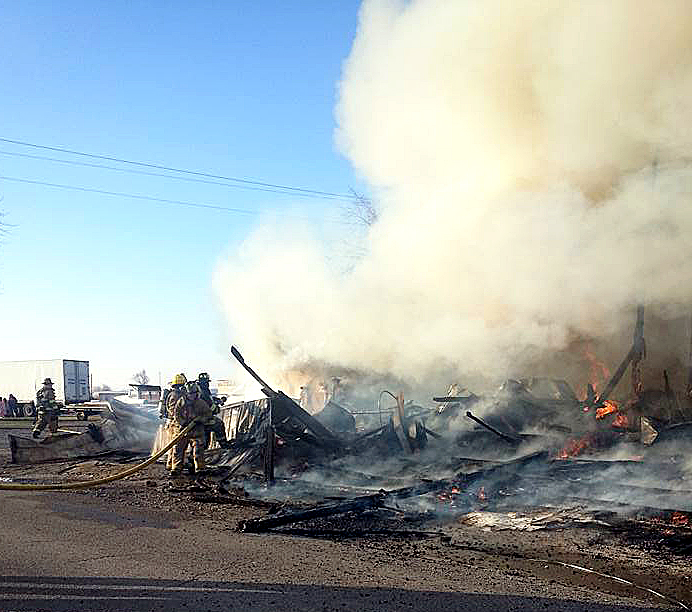 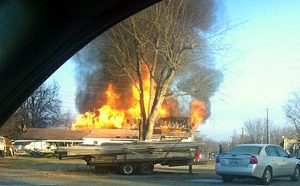 This story was updated with additional information Wednesday, Dec. 14.

MORELAND – A fire left one business a total loss and a family without a home early Saturday morning.

According to Lincoln County Fire Station No. 3 Captain Sean Reardon, he was first on scene at the Old Auction Barn on Ky. Hwy. 2141 at about 8 a.m. on Dec. 10.

“When I arrived on scene it was fully involved,” Reardon said. “Flames (were) coming out of the roof.”

Firefighters had been on scene for about 30 to 35 minutes when the front wall and roof collapsed, he said.

A man and woman who lived in an apartment attached to the building were said to be safe and no injuries were reported.

“The fire was hot enough it was melting siding on (the) house next door,” Reardon said.

Crews were on scene for several hours Saturday putting out the flames.

The apartment, which was located in the back left corner of the building, was a total loss as well.

According to Deputy Fire Chief Troy Gingrass, the cause of the fire is undetermined but information from Spears indicated that he was attempting to thaw out some water lines with a radiated heater.

Gingrass said an electrical cause can’t be ruled out, adding that the auction barn owned or rented by Elaine and Mike Pruyear, was a very old building.

There were actually three different structures damaged by the fire, Gingrass said – the auction barn, apartment and an adjacent home which suffered damage to the siding.

Gingrass said the adjacent home was not destroyed by the fire but siding would have to be replaced after flames melted portions of it.

As for the family who lived in the apartment, firefighters said the American Red Cross was contacted to help them with arrangements following the fire.

Reardon said Station No. 3 was assisted by Fire Stations No. 1, 4, 5, 6 and 8 as well as Hustonville City Fire and Lincoln County EMS.