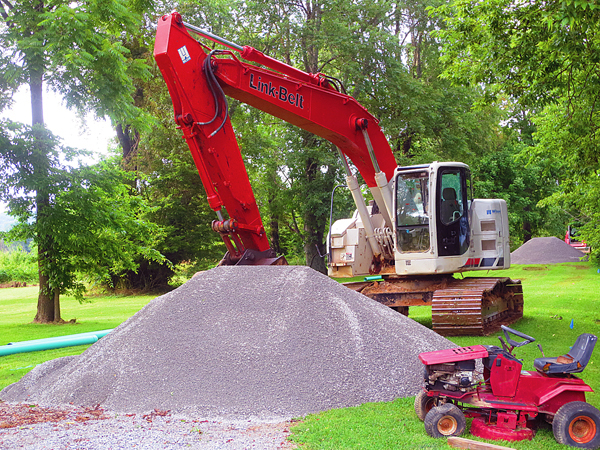 HUSTONVILLE – A special-called meeting of Hustonville City Council members and Lincoln County Sanitation District members was held earlier this month for the purpose of renegotiating the sewer contract between the two entities.

Hustonville voted last month to renegotiate the contract, which details the operations, maintenance and billing agreement for a new sewer system being installed on the west side of the county – the first phase of an ongoing effort to combat water pollution in the Dix River and Hanging Fork Creek water sheds.

While construction of the new line is well underway, city council members and sanitation district officials walked through a newly-revised contract on Nov. 17, which no longer names Hustonville as the operator in charge of maintenance and day-to-day operations of the new system.

In the new agreement, the City of Hustonville will only handle the meter reading, billing and collection services for the new wastewater system, which are services that the city already performs for its water system.

“We have gone through here and tried to basically take everything that had to do with operations and maintenance out of it and leave only the billing portion,” said Sanitation District Board Chairman Bill Payne during the Nov. 17 meeting.

The operations and maintenance of the system will now be the responsibility of the district and Payne said he will serve as sewer administrator and act as liaison with the biller, while City Clerk Rita Clem will be responsible for adding Hustonville water customers in the service area to the billing software.

Councilman Jimmy Evans questioned the new agreement’s level of compensation to the city for billing services.

“If the average sewer bill is $50 per month, we’ll get .70 cents out of each sewer bill and the other $49.30 will go to pay the loans off and maintain the sewer system. It looks like we should get a decent amount for our services and we’re getting one percent,” Evans said.

Mayor David Peyton said the services the city will be providing don’t amount to that much.

“Our guys are going to read the meters anyway. We’re going to mail out bills anyway,” Peyton said.

Evans said the council needs to negotiate and get the best deal for the city.
Payne said if the city and district can’t agree then the district will have to do the billing, which will be fairly expensive.

“The only way we could pay our interest and all these expenses, the money that we’ve borrowed to put this together, is to increase the sewer bill and that’s really the last thing we want to do,” Payne said. “We want to keep it as affordable as possible for our customers.”

Payne said the district recognizes it will take extra time and effort for the city clerk to set up all of the new sewer accounts but Peyton said the city is limited in the amount it can give in bonuses and if the compensation were to go to the water department, he’s not sure if Clem would receive it or not.

Peyton said the goal is to properly compensate Clem without hurting the city or the water company in this process.

“We would have to make Rita an independent contractor and set up a contract with her to do that,” said engineer Luther Galloway.

Peyton said of the $10 compensation for each new account, $5 will go to the water department and $5 will go to Clem to compensate for her time, which council members agreed with, pending advice from City Attorney Jonathan Baker.

“We’ll get a ruling from Jonathan before the final draft is completed,” he said.

Payne said he also spoke to Certified Public Accountant Craig Butler about the best way to handle billing for the sanitation district.

“I spoke with Craig Butler and asked him how it would be best to do these transactions and he said the cleanest way to do it is for you to send us a bill for all that you collect for wastewater, send us a check for the revenue you collect and then we’ll turn around and send you a check for these billing services,” Payne said. “He seemed to be pretty convinced that was the best way to do it.”
Peyton said he agreed that the proposed process would keep everything “clean” and make record-keeping easier.

The contract’s initial trial period is 24 months, meaning the city or the district can terminate the contract with or without cause after two years. Other options for termination apply if either party defaults on the agreement.

Councilman Evans also told district officials that he thinks the roads damaged by construction of the new sewer system should be repaired by the district, not the city.

Galloway said there might be money leftover after the project to go towards the road repair.

“I think these roads ought to be put back the way they was and with sewer money, not water money,” Evans said. “It’s not being good neighbors.”

Payne said Main Street and a few other roads were returned to their original state.

“I have to say I agree with Jimmy on that one,” Peyton said. “If you can’t afford to fix it, don’t tear it up.”

Since the discussion of repairing roads was not on the agenda for the special-called meeting, the group ceased discussing the issue.
As of Tuesday this week, Peyton said Baker’s suggestion was that payment for Clem be made to the water department once a month.

“I told Jonathan as long as Craig was good with that, the city council will be fine with it as well,” he said. “We just want it to be clean. Butler is really the one who handles our books and he handles their books, so we’re going to rely on his expertise on which way to go with it.”

Once that’s decided, Peyton said he will go ahead and sign the agreement.