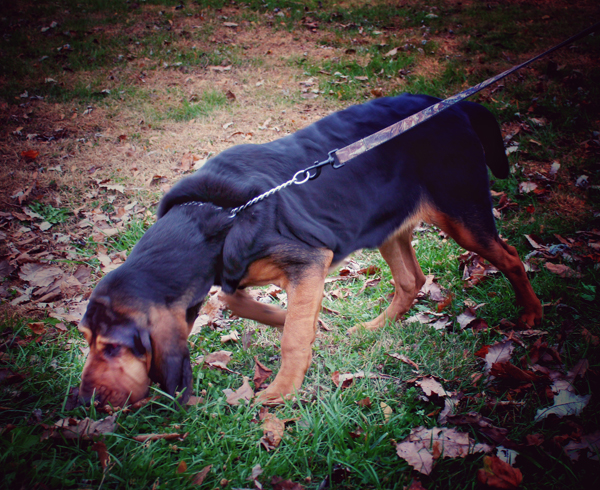 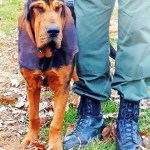 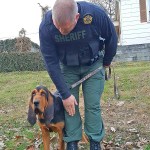 STANFORD – There are few other breeds, if any, that can find and follow a scent like a Bloodhound can and with a proven history of aiding law enforcement, it’s easy to see why the Lincoln County Sheriff’s Office is excited to welcome one to their team.

The newest member of the sheriff’s office is a six-month-old, AKC registered Bloodhound named Meshak, who came to Lincoln County from Louisiana at no cost thanks to a non-profit organization out of Colorado.

Buster Vance, a retired police officer from the Alexandria department, trains bloodhounds for the foundation and has been for about 20 years, according to Meshak’s new handler, Sheriff’s Deputy Chase Marcum.

“Meshak’s purpose is primarily to track,” Marcum said. “What I mean by track is a variety of purposes like lost or missing persons, kids and things of that nature.”

“When you use a full-service dog like ones we’ve had in the past, when those dogs track somebody, their reward was to bite somebody,” the deputy explained. “In Meshak’s case, if someone runs from us on foot or bails out of a car on us, we can still use him to track that person down and there’s not a bite at the end of it.”

Being only six-months-old, Meshak is trained in tracking to an extent, Marcum said, but some fine-tuning will be needed as he continues to develop.

But when Meshak does something right, Marcum said he is showered in praise.

“When he does what he’s supposed to and what you’re teaching him to do, you act like he just won the Super Bowl,” Marcum said. “You make sure he knows what he did is exactly what he was supposed to do and you act like that every single time he does it right.”

Marcum said aside from basic obedience, he and Meshak have been working on fine-tuning his tracking ability by hiding several dog treats in a general vicinity and letting him find them.

“We have our own words we use and he’s getting used to those. When I say those words he knows what to do,” Marcum said. “I set his treats out, I say ‘find it’ meaning I want him to find that scent and once he finds all of his treats he gets praise.”

Initially, Meshak was praised for every treat he found but as he progresses he gets less praise through the tracking process and instead is praised when the track is complete.

“He’s not like a typical police dog, most police dogs when they do something good they get a ball or a chew-toy. But Meshak gets dog treats,” he said.

As far as what purpose Meshak will serve on any given day, Marcum said it will vary depending on the situation.

“As far as criteria, it’s a case-by-case basis because we don’t want to put the dog in a dangerous situation but at the same time if he can help us find the bad guy, we’re going to use him,” he said.

While German Shepherds are typically the predominant breed of choice for police today – and has been for the Lincoln County Sheriff’s Office in the past – the Bloodhound offers a unique, focused set of skills and possesses the ability to put those skills to work better than almost any other animal.

From the saggy skin to the floppy ears, which are said to fan the scent towards the dogs’ nose, the Bloodhound is built and bred for the purpose of tracking and once a scent is found, they can follow it for days, even weeks – long after other breeds would have lost it.
And unlike German Shepherds, Bloodhounds are about as calm and collected as it gets for a police dog, Marcum said.

“He’s a very mild-mannered dog. He’s not aggressive in nature or anything like that,” he said. “If someone were to try to hurt me, then it’d be different, though.”

Meshak was raised on the outskirts of Alexandria in Louisiana and trained through the ALlE (Abducted, Lost, Innocent, Enough) Foundation, a non-profit organization founded in the 1990’s in Denver, CO.

The foundation and it’s mission to provide trained bloodhounds and K-9 units to assist in locating missing or abducted children stems from the tragic death of five-year-old Alie Berrelez, who was abducted and found dead in Denver in 1993.

The first break in the case to find the young girl came when a bloodhound named Yogi joined the search efforts, according to the foundation’s website.

The bloodhound searched the canyon terrain for several days until the girl was found four days later, stuffed in a duffel bag at the bottom of a canyon about 15 miles away from where she was abducted. Shortly after Alie’s body was discovered, the Berrelez family founded the Alie Foundation in honor of Yogi and Richard Berrelez, the child’s grandfather, began training bloodhounds for police.

Meshak is one of more than 400 dogs that the foundation has donated to law enforcement across the U.S., Marcum said.

Deputy Michael Mullins was the one who discovered the non-profit foundation and requested information about obtaining a bloodhound for the Lincoln Sheriff’s Office, Marcum said.

Since Meshak arrived in Lincoln County, he hasn’t left his handler’s side.

“I’ve had him for only a week-and-a-half and he never leaves my side. He stays very close to me,” Marcum said. “Once we get him fully trained and I feel comfortable with his tracking skills, I will disseminate knowledge and make him available to other agencies in the area.”

But for now, the young bloodhound will stay in Lincoln County and continue honing his tracking skills.

SO YOU KNOW:
The ALlE Foundation operates on contributions from the general public, which are tax-deductible. According to the foundation’s website, the organization can accept grants or donations from the government, foundations, businesses, private groups, public agencies, campaigns, fundraisers, individuals and in-kind gifts.
For more information or to make a donation, visit the foundation’s website at www.alie.org.

Board of adjustments grants variances for three signs