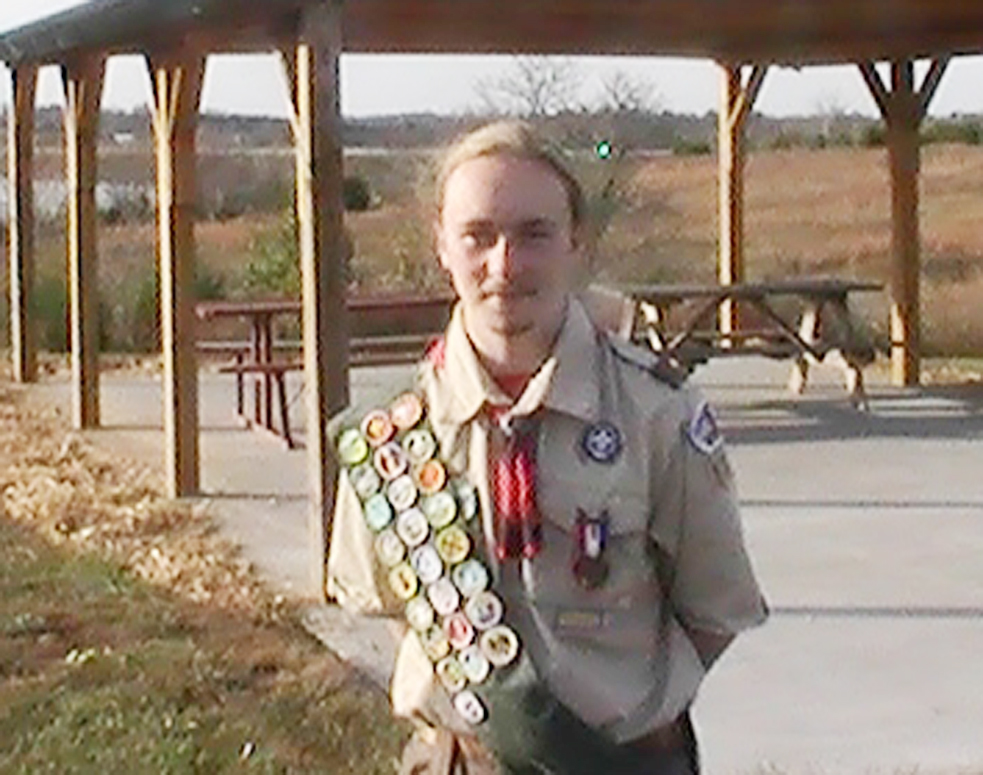 Jonah Pfeifer achieved a lifetime goal of receiving his Eagle Scout Award at his Court of Honor Ceremony on Nov. 5 at Hebron Lakeside Church. Jonah is an active member of Boy Scout Troop 180, sponsored by the Lancaster United Methodist Church, under leadership of Scout Master, Christopher Ward. He is also a crew member for Venture Crew 73 in Lexington.

For his Eagle Project, Pfeifer wanted to give back to the youth program and the church that supported and guided him for the last 10 years. He built a 20 x 30 outdoor pavilion with a concrete base at his home church, Hebron Lakeside. Under his direction, Pfeifer coordinated a work crew of scouts and adult volunteers to complete the final project in over a year. He dedicated the pavilion to the memory of John Holtzclaw, a well loved parishioner at Hebron Lakeside who helped spearhead the project.

Pfeifer comes from a family very dedicated to scouting. He follows a great grandfather, Walter Morgan, who Eagled in 1932,  his father, Jeremy Pfeifer, and his cousin Owsley Tanner, who is also an Eagle Scout. He also has two younger siblings, that are now active Scouts and the other is waiting to follow in his brother’s footsteps.

Pfeifer joined Cub Scouts in 2006 with Pack 180 at CDR as a Wolf Scout. As a Webelo Scout he served as a Den Chief within the pack. He continued through the program to earn his Arrow Of Light in February 2011. This is the highest achievement a scout can earn in Cub Scouts.

In the summer of 2012, at age 13, Pfeifer hiked the Appalachian Trail, in the Smokey Mountain National Forest with his father, Jeremy Pfeifer. It was a four day, 36 mile excursion.

As a Boy Scout, he earned 26 Merit Badges and held the positions of Patrol Leader, Senior Patrol Leader and Crew Leader of 609-A during the trip to Philmont Scout Ranch. In the summer of 2015, Pfeifer worked as a Scout Skills Advisor at Tunnel Mill Scout Reservation, with the Lincoln Heritage Council. He also attended National Youth Leadership Training (NYLT) at Camp McKee in Clay City.

Pfeifer earned four “50” Miler Awards, which requires a scout to hike, boat or canoe 50 consecutive miles in five days. He earned two for hiking at Glacier National Park in Montana and Philmont Scout Ranch in New Mexico. He earned one for canoeing on the Ausable River in Michigan and one for kayaking on the east coast of Georgia, while visiting the USS Yorktown in South Carolina.

Pfeifer was inducted into the Kawida Lodge of the Order of the Arrow through the Bluegrass Council in April 2014 and into the Brotherhood Conversion in May 2015. The OA (order of the Arrow) is Scouting’s National Honor Society. It is an honor to be a member and to wear the sash that represents this Order.

Pfeifer is the son of Jeremy and Gina Pfeifer, of Lancaster, grandson of Peggy Pfeifer and Wayne Williams, of Crab Orchard, and Robert and Opal Baker, of Berea.
As he talked about earning his Eagle Rank, Pfeifer stated, “It’s not what you learn in scouts, it’s how you live as a Scout.”