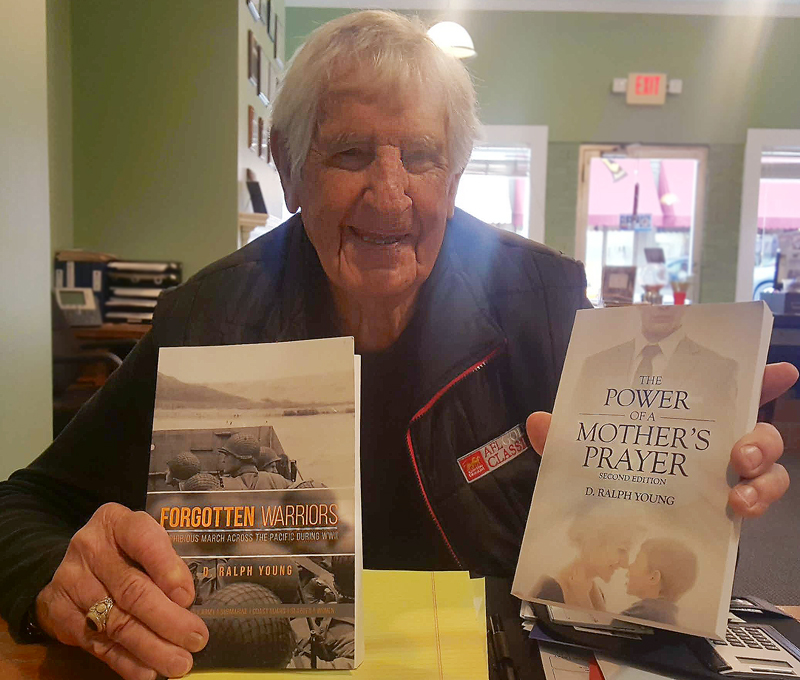 Photo by Abigail Whitehouse Local veteran Ralph Young holds two books he authored including “A Mother’s Prayer” and "Forgotten Warriors: The Amphibious March Across the Pacific During World War II.” Young is an inductee of the University of Kentucky’s College of Engineering Hall of Distinction and the creator of a new engineering scholarship specifically for Lincoln County students interested in pursuing the engineering field.

STANFORD – D. Ralph Young was born where he lives today on Greasy Ridge Road in Lincoln County, but he traveled to many foreign places between then and now.

As an engineer, Young has helped develop a variety of projects across the United States and abroad in southeast Asia and the Middle East but it’s the time he spent in the Pacific during World War II as a Gunner’s Mate that is the focus of his book “Forgotten Warriors: The Amphibious March Across the Pacific During World War II.”

The march across the Pacific
“I volunteered when I was 17. They allowed me to finish high school, so I didn’t go into the service until 18, but I had already enlisted and was on standby,” Young said.

That was in 1943. Young joined the Navy and served as a Gunner’s Mate aboard the USS J. Franklin Bell during the Asiatic-Pacific Theater of World War II, participating in several campaigns alongside his shipmates from the Aleutian Islands Campaign to the Battle for Okinawa – and many others.

“Over the years, I became disheartened because every year we celebrate Normandy and if you ask anybody in the U.S. if they know where Normandy is, 99 percent will say yes because they’ve heard of it,” Young said. “But if you ask them where Pelelui or Tarawa or Tinian is, they give you a blank stare.”

Young said he and his shipmates fought a different kind of enemy than those fought in Europe.

“In Europe, if you surrounded the Italians or Germans, they surrendered. But in the Pacific, if you surrounded the Japanese, they’d pick up a stick if that’s all they had and charge,” he said. “Our wounded-to-death rate was three wounded for about every one killed. The Japanese was 18 killed for each one wounded. That tells you that they refused to surrender and one of the reasons why our death rate was so much higher than the European Theater.”

Young’s book details many battles across the Pacific, including the Marianas Campaign and the Battle for Tinian, which was one of a few critical islands the U.S. needed to conquer in order to get close enough to Tokyo to fly out B-29 planes.

Tinian was about 1,300 miles from Tokyo and the B-29 planes had a range of about 1,500 miles, Young said. After attacking the island for several days, the U.S. secured Tinian but not before the Japanese launched a final suicide attack resulting in thousands of casualties.

“The emperor told them if we won, the best thing for them to do is to commit suicide because he was afraid that we would treat them good and (use it) as propaganda against them,” Young said.
Young said there was nothing he and his shipmates could do as thousands jumped from a cliff on the north side of Saipan and fell about 800 feet to their death on the coral reefs below.
“In fact, they threw the children over first and then followed the children,” he said. “That was awful. There was nothing you could do.”

But the U.S. success was a turning point in the war – an important victory that Young said he was proud to be a part of because it helped bring about the end of WWII.

“It was on Tinian that the bombing of Hiroshima and Nagasaki was accomplished,” he said.

Like many of the Pacific battles, Young said there were just as many forgotten heroes who fought in the war but a fighter pilot named George Gay has always stood out in his mind.

Young said Gay’s plane was shot down and he was ejected from the craft and landed in the middle of the Japanese fleet. With a seat cushion over his head, Gay stayed in the water for 30 hours as the Japanese fleet moved on, leaving him behind as the only one of the other 14 left alive. Gay was picked up by an American plane and returned to the states after the war where he flew as a commercial pilot for 30 years.

At the age of 77, Gay died and his ashes were returned to the scene of the Battle of Midway so he could rejoin his comrades, Young said.

“Those are the type of people that the United States had fighting in our military,” he said. “We’re just a proud group of people who never ask anything from our government. We came home and didn’t ask for anything.”

The book is 166 pages and covers Young’s entire experience in the War – and about two-and-a-half years of research.

“I’m proud of it,” he said. “I have included all of the Medal of Honor winners that were awarded in the Pacific.”

Remembering those who fought alongside him, those who lost their lives and how together, they helped bring about the end of a devastating war – that is the goal of Young’s book Forgotten Warriors.

“The most important part to me is getting recognition for some of the battles that were fought so that the people who fought in Midway and Tinian and Saipan and Peleliu and Tarawa are not forgotten,” he said.

The book includes a section devoted to U.S. women’s role during the war with Japan from secretaries to “Rosie the Riveters” in addition to a variety of other perspectives and even features.

While many did not make it back from the Pacific alive, Young said he attributes his survival, safe return and life of accomplishment to the power of his mother’s prayers – the subject of another book he wrote in 2014.

“I’ll never get over my mother sitting on the front porch as I left for the war, with tears running down her cheeks, and saying ‘Ralph I’ll be in constant prayer for you,’” he said. “I have no other answer to the fabulous and terrific career that I had other than God told my mother that the would take me under his wing.”

Today, Young is a 91-year-old who still runs two miles in 28 minutes and loves his family farm on Greasy Ridge Road.

SO YOU KNOW:
“Forgotten Warriors: The Amphibious March Across the Pacific During World War II” can be purchased online at www.amazon.com and is available in several stores such as Walmart, Barnes & Noble and Books-A-Million.
For more information about Young and his work, visit www.dralphyoung.com.