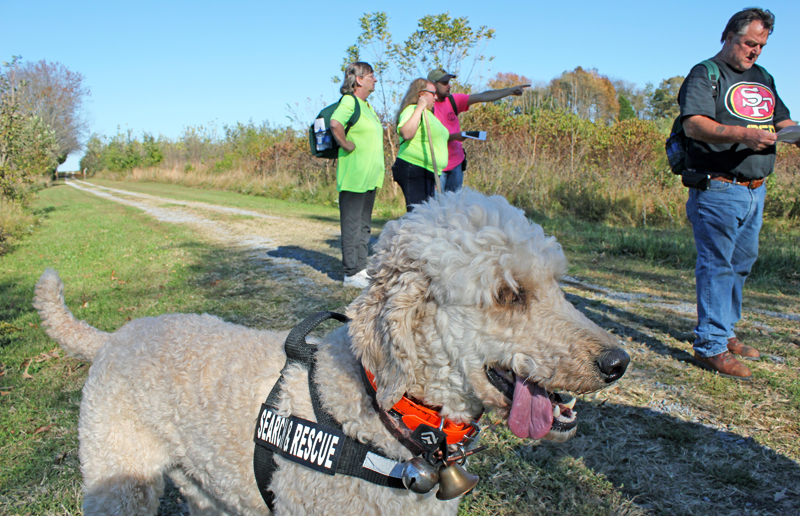 Photo by Abigail Whitehouse Lincoln County Search and Rescue K9 Senta stands by as volunteers review a map of the grounds and prepare to canvass the area for a “missing person.” 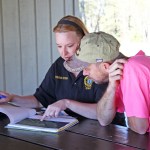 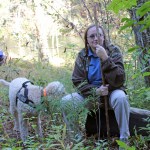 Photo by Abigail Whitehouse K9 Senta of Lincoln’s Search and Rescue team leads the group to Stacy Thomason who pretended to be lost in the woods near the William Whitley House during a practice drill. 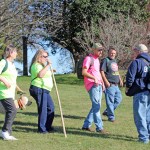 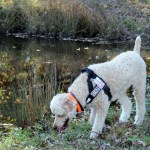 For several hours on a Sunday afternoon, two teams split up and searched the grounds of the state historic site in search of a “lost” Stacy Thomason. Before departing, search and rescue volunteers were briefed on the scenario which detailed Thomason’s “disappearance.”

Thomason was described as a missing person who had an argument with her husband, slammed her phone down and walked off. One witness, Mike Patterson, who is the grounds keeper of the site, said he “witnessed which direction Thomason was going” before she “disappeared.”

Thomason was said to have been missing since 1 p.m. and the SAR team hit the woods shortly after receiving a CodeRED emergency page and arriving on scene. Volunteers were also given a description of Thomason’s appearance, clothing, age and specific health conditions that could play a role.

The team’s search and rescue K9 Senta also participated in the efforts as she joined handler Nancy Kilby and SAR member Linda Patterson who covered a large area of the grounds while the other team traveled in the opposite direction to search the rest.

It took the team about two-and-a-half hours to track down Thomason’s location in the woods before they returned to the pavilion area to go over positives and negatives of the practice drill.

The group agreed that the biggest contributing factor during the search was the wind.
“If the wind had been right, we would’ve only needed Senta,” said Kilby, Senta’s handler.
Lincoln Emergency Management Deputy Director Trish O’Quin said with Cedar Creek Lake being so close by, there will always be wind coming off of it.

Thomason agreed and said the wind was constant while she sat waiting to be found.
“When you know that it’s heading in that direction, I would suggest that you find some way to contact boaters because there were a lot of boaters I know who saw me,” Thomason said.
O’Quin said during a true search and rescue scenario Kentucky Fish and Wildlife would be participating as well.

Volunteers said the wind also made it hard to determine if the voices they heard yelling were Thomason or people on the lake.

O’Quin said all of the contributing factors are what made the William Whitley grounds a good place to practice.

“That’s why this was a really good training area because you have all of these different factors of people on the lake, people coming in and out, runners coming through here,” O’Quin said.

SAR member Jason Kilby said in a real situation more volunteers would likely respond and he might have changed the way he split up the teams.

“I should have had them go in a little further,” he said. “I didn’t have a big enough coverage area. If it was an actual search, we probably would have had more people here. Really it should have been one team going the whole distance. That’s why we’re doing the training. Sometimes this is all we’re going to have. Basically, what I saw was that I would’ve only had one team and covered one certain area.”

Kilby said he underestimated the 100-acre area and didn’t realize it was so big.
“That’s the reason I broke it up into two groups,” he said.

Overall, the search and rescue team was pleased with the response of the two teams and agreed that the training helped identify key elements that will improve their response in real-life situations in the future.

The group discussed visiting elementary schools in the area to speak with children about what to do if they get lost in addition to recruiting more members to join the team.