Photo by Abigail Whitehouse Lincoln County High School staff members gather behind a brand new banner that celebrates the school’s recent designation of a distinguished school of distinction after the release of state assessment scores. 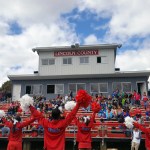 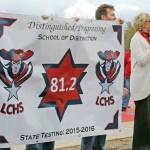 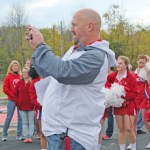 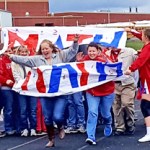 STANFORD – The sound of celebration echoed across the Lincoln County High School campus recently as students and staff gathered to applaud state assessment scores that named LCHS a distinguished school of distinction.

That’s according to results of the 2015-16 Kentucky Performance for Education Progress (KPREP) assessments which were released in early October. The Lincoln County School District was also named a distinguished district with scores improving from 64 in 2014-15 to 71.3 in 2015-16.
LCHS improved it’s 2014-15 overall score of 76.3 to 81.1 in 2015-16, earning the designation of a distinguished, progressing school.

The school also surpassed it’s goal for graduation rate by 1.4 for a total rate of 97 in 2015-16. The graduation rate for the previous year was 96.3, according to state data.
District officials continue to praise improvements at the high school, which has gone from being a “persistently low-achieving” (PLA) school to a distinguished, progressing school in just a few years.

LCHS officially shed it’s priority status last year after state results improved and the school was deemed a distinguished, progressing and high-performing school. In order to get rid of the PLA status, LCHS had to stay out of the bottom 10 percent of schools in the state, maintain a graduation rate above 70 percent and meet the annual measurable objective for three years in a row.

Director of Teacher and Human Resources Pam Hart applauded LCHS students and staff for earning the recent classifications as she hoisted the new banner up for everyone to see.
Each department, from math to arts and humanities, was recognized during the Friday afternoon celebration as the groups burst through their respective paper banners.
Results from the 2015-16 state data showed improvement in scores in math, reading, science, social studies and language mechanics, while scores in writing dropped slightly from 54.1 in 2014-15 to 46.2 in 2015-16.

The most substantial improvement in scores was in language mechanics. LCHS improved from a score of 45.2 to 59.8 in the most recent assessment.
Also honored during the school celebration was Agatha Manion who was deemed the 2016 Kentucky World Language Association French Teacher of the Year and National Merit Semi-finalist Auburn Mattingly. Governor’s Scholars included Austin Wren, Taylor-Grace Mingo, Taylor Floyd and Kayla Cox.

In a statement released by the school district following the release of results, Lincoln County Superintendent Michael Rowe expressed his excitement over the new designations within the district.

“We are pleased to be deemed a Distinguished school district! All of our schools have points for celebrations,” he said. “Lincoln County High School is on track to meet their goal of a top 10 high school in the state of Kentucky.”

Rowe said the data points to the districts’ progress towards achieving the goal of becoming a District of Distinction.