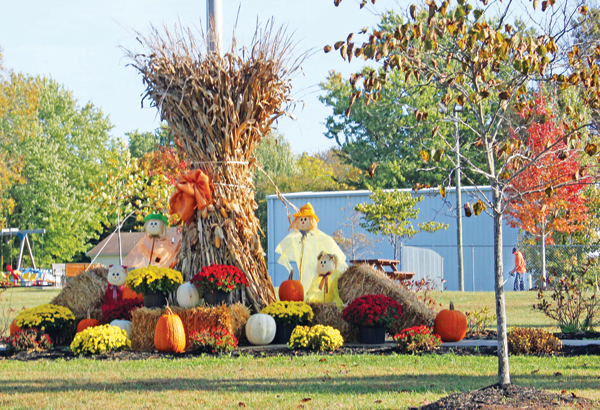 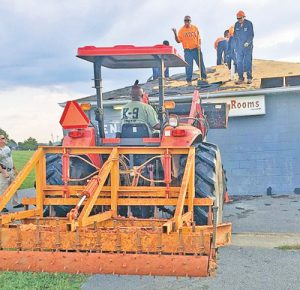 CRAB ORCHARD – Picking up trash, painting street lines and cleaning up abandoned properties are just a few things local inmates have been doing for the City of Crab Orchard – something that all officials involved call a win-win situation for everyone.

For the last three months, 24-year-old inmate Daren Walls and others have been working quietly across the city helping clean up neglected areas.

“It’s better than sitting in jail,” Walls said as he took a break from weed-eating around the city park Monday morning. “I’ve gotten to know this park pretty good.”

Walls has been in the inmate work program for about three months, he said, and every day he works for the city is a day off of his original seven-year sentence.

“I had seven years but I’m almost done. I should be home within a month,” he said. “I’m definitely ready to go. Can’t get here fast enough.”

The last three months has done more than just cut his sentence down, though, Walls said.

“It’s definitely been a learning experience. It kept me busy that’s for sure. Keeps my mind occupied,” he said. “I’d like to stay out here all week, weekend too.”

Walls has helped the city in a variety of ways, according to City Clerk Nancy Baker, and the residents have taken notice.

“People in the town know him and they just love him,” Baker said. “They talk about how good of a worker he is.”

Baker said where the city is limited on employees, the inmate work program has been a tremendous help in cleaning up areas like the city park and even clearing blighted and abandoned properties.
“You couldn’t even tell there was a house there and now it’s so nice,” Baker said. “This park was awful. You couldn’t even tell there was anything here. The town looks better now than it ever has.”

“Getting to work with Dwayne, being a cop, we’ve become friends I guess you could say,” Walls said.
Taylor, who has been a deputy for nine years, agreed that the program has helped to bridge communication between law enforcement and inmates.

“A lot of times people think we’re the bad person, especially when we’ve arrested them,” Taylor said. “This way we have a better relationship with inmates and it shows them we’re actually human just like them.”

Taylor said thanks to Lincoln County Sheriff Curt Folger and Jailer Rob Wilson, who helped develop the inmate work program and place workers across the county, the City of Crab Orchard is one area that is reaping the benefits.

“Between the city and the jail it’s a really good program,” Taylor said. “It’s a win-win situation for the jail and the city here. It gets the inmates out of jail, gets them credit for time served, and also it’s good for the community and saves tax dollar money by cleaning up instead of paying someone to come and clean it.”

On any given day of the work-week, Taylor and inmates can be found picking up trash, weed-eating and mowing, fixing neglected city road signs and planting trees or flowers.
Taylor said the inmates have worked hard and the result shows.

“They’ve done a really good job cleaning up some property that was abandoned and the parks here,” Taylor said. “We get a lot of compliments on the park and how it looks so good.”

Baker said the work that inmates have done across Crab Orchard is something that all city officials appreciate – and all have come to know Walls as more than an inmate but as a person.
“The mayor and all the city commissioners love him,” Baker said. “Everybody in town knows him now.”