Hustonville woman killed in wreck along U.S. 27 in Garrard 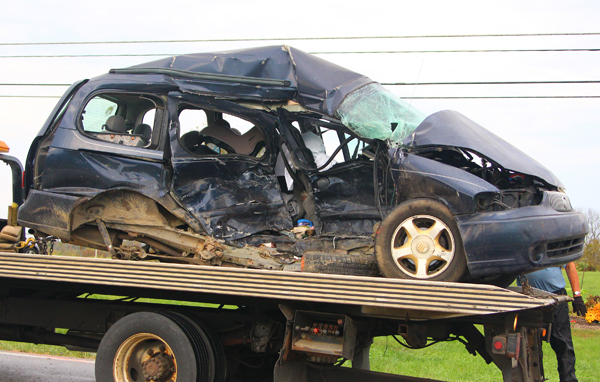 Photo by Ben Kleppinger A damaged vehicle involved in a wreck on U.S. 27 last Thursday is towed from the scene.

LANCASTER — A Hustonville woman was killed and two others were severely injured in a two-vehicle wreck along U.S. 27 in Garrard County last Thursday.
Garrard County Coroner Daryl Hodge identified the woman as Rebeka Lewis, 38, of Hustonville.
The wreck happened around 12:50 p.m., when a southbound blue minivan and a northbound white minivan collided, Garrard County Deputy Tevis Graham said. The wreck occurred about four miles north of Lancaster.
Graham said the driver of blue minivan was killed; a passenger in the blue minivan suffered severe injuries and was taken to the University of Kentucky Chandler Medical Center. The passenger was in critical condition at the hospital Thursday afternoon, Graham said.
The driver of the white minivan suffered major lower-body injuries and was taken to the Lexington hospital as well, Graham said. Both injured people had to be taken by ambulance because the weather conditions did not allow for an air evacuation, he said.
Graham said Thursday afternoon the name of the deceased was being withheld until family members could be notified.
What caused the accident has not been determined, but law enforcement officers confirmed the front of the white minivan collided with the passenger side of the blue minivan. Kentucky State Police will be assisting in the investigation by conducting an accident reconstruction.
Hodge said an autopsy is being conducted in Frankfort Friday morning to determine cause of death for Lewis.
Lancaster Fire Department assisted at the scene and provided extrication for people in the vehicles.
The Garrard County Fire Department also assisted the sheriff’s office at the scene, Graham said.
Both directions of U.S. 27 were blocked for about four hours while the scene was cleared.