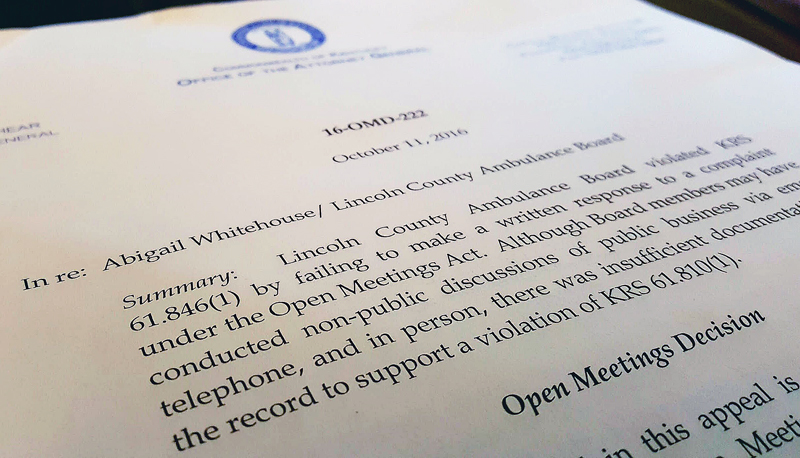 STANFORD – While the Kentucky Attorney General’s Office ruled that a string of emails among Lincoln County Ambulance Board members indicate violations of the state Open Meetings Act likely occurred, the office ruled there was not enough evidence to support allegations that a quorum participated in the discussion of public business.
But that interpretation is something James Adams, an attorney for the Kentucky Press Association, believes is debatable.
“It appears to be their conclusion that there is only a discussion if it is two-way,” Adams said during a phone interview Monday. “In other words, if a board member sends his opinion about something to three other people — constituting a quorum of 4 people — the receipt of that is not enough to document a violation.”
The AG’s ruling claims that a response from a number of board members constituting a quorum is needed in order to fit the definition of the word “discussion” in the law.
While the open meetings law does not specifically address email correspondence, a previous attorney general ruling found “no appreciable difference between non-public telephonic meetings of public agencies,” which are forbidden, “and non-public email meetings.”
“I’m a little perplexed by the conclusion that there has to be a reply to an email before there is a discussion,” Adams said. “I think the discussion was initiated and occurred when the email was sent.”
Adams said the same interpretation doesn’t seem to apply to in-person meetings.
“If you imagine going to a public meeting, sometimes the people who are in attendance don’t speak, they’re only there. But they still constitute a quorum participating in the discussion, by being there, by listening,” Adams said. “I don’t think it requires the verbal participation of everybody in order to call it a discussion.”
In some respects, Adams said he thinks the attorney general let the ambulance board off too easy.
“What this runs the risk of telling public agencies is that you can send an email to a quorum one-way and ‘oh by the way, make sure everybody knows not to reply to it,’” Adams said. “I don’t think that is in the spirit of the act.”
“I think they draw too narrow a definition of ‘discussion,’” Adams added. “I think a discussion occurred because you have an email with the names of a quorum of the board on it and that email contains a discussion of public business.”
Former KPA president and retired editor of The Advocate Messenger John Nelson said while there was not enough evidence to prove a quorum participated in the alleged non-public meetings, the AG office’s ruling makes it pretty clear that an attempt to hold the meetings was made.
“There should be no excuse or reason in the future for them to attempt anything like they attempted on any of these three occasions,” Nelson said.
Nelson, well known among journalists for his watch-dog reporting and dedication to open government, said the newspaper’s appeal and consequent ruling from the AG’s office brought attention to a problem.
“Hopefully they didn’t do this intentionally and hopefully now they know the way they’re supposed to conduct business,” Nelson said. “I think the attorney general was pretty clear in his suggestion that the Open Meetings Act could have, and possibly was, violated on more than one occasion and the board members should have gotten the message.”