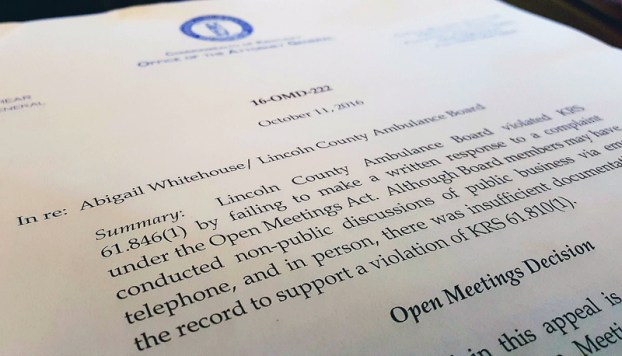 Ambulance board may have violated law with private meetings, emails

STANFORD — The Lincoln County Ambulance Board violated open meetings law by failing to respond to an open meetings complaint concerning emails among board members, the Kentucky Attorney General’s Office has ruled.
The emails in question indicate further violations may have taken place, but there wasn’t enough proof to rule that violations of the Open Meetings Act definitely occurred, according to the ruling.
The ruling issued last week is the result of an open meetings appeal filed by The Interior Journal on Sept. 27, after the ambulance board failed to respond to a complaint from the newspaper that members conducted non-public discussions of public business and violated several provisions of Kentucky’s Open Meetings Act.
In late July, The Interior Journal sent an open records request seeking emails among ambulance board members regarding their discussion of a budget proposal from the Lincoln County EMS Consolidation Committee.
In its complaint filed Sept. 1, The Interior Journal alleged the emails indicated board members had conducted non-public meetings and discussed business specific to the Lincoln County Ambulance Board via emails, telephone and in person, violating several requirements of the law that public agencies operate in public.
Specifically, the complaint refers to emails that were sent to a quorum of board members in which at least one of them discusses public business or calls for an in-person or telephonic meeting for similar discussion without making the meeting public or notifying the public of the meeting.
Under state law, public agencies are required to hold discussion of public business at public meetings, the time and location of which have been announced in advance.
By law, the board had three working days to respond to the newspaper’s complaint. The board’s failure to do so resulted in a direct violation of the Open Meetings Law, the AG’s office ruled.

What the emails revealed

The first of several allegations in the newspaper’s complaint stems from an April 30 email inviting an unknown number of board members to participate in a telephonic conference call with the subject line, “Call to discuss Lincoln County ambulance service.”
Board member Bob Floro was listed as the call ogranizer and while emails showed board members Ted Defosset and Naren James were aware of the telephonic meeting, the AG’s office said it could not verify from the other emails whether other members attended the telephonic meeting.
If a quorum of four members of the ambulance board were engaged in the discussion, then the telephonic meeting would be in violation of the state’s open meetings requirements.
Similarly, another email acquired through the open records request calls for a non-public, in-person meeting of board members.
In the July 19 email, board member Bob Floro writes, “Folks, we will get together in Dr. James’ office in Stanford tomorrow (Wednesday) evening at 6 p.m. Remember, according to KY Open Meetings Law, we are only there to share ideas and educate each other – NOT to make any conclusive decisions!”
The AG’s office ruled the context of the email and Floro’s invocation of open meetings requirements appears to indicate that a quorum of the board was expected to attend.
Since Defosset was the only member to respond (“Sounds good. Thnx”), the ruling states that the “record lacks sufficient certainty for this office to determine that a quorum actually attended the July 20 meeting and we cannot conclude that the Open Meetings Act was violated.”
The AG’s office also pointed out the error in Floro’s interpretation of the law.
“Despite Mr. Floro’s claim that merely sharing ideas and educating each other would not have been violative of the Open Meetings Act, it is clear that such sharing of ideas would likely have constituted a discussion of public business,” the ruling reads.
KRS. 61.810 (1) clarifies that a public meeting includes one at which public business is discussed, not merely one where action is taken.
The newspaper’s complaint also cited a July 24 email sent by Floro to board members Ted Defosset, Naren James and Jimmy Lane, in which Floro discusses the consolidation committee’s budget proposal, as well as options for setting the 2016 tax rate.
“Public business is the discussion of the various alternatives to a given issue about which the agency has the option to take action,” the AG ruling reads. The newspaper argued that the email constitutes discussion of public business in a non-public forum and therefore was a meeting and violation of the law.
In the same email, Floro also indicates his intention to meet with the board chairman Jerry Shelton following the sending of the email, which the newspaper argued was a clear indication that board members violated the law by holding a series of “less-than-qourum meetings.”
“I am meeting with Jerry in Stanford in an hour to go over all this,” Floro wrote. “Also, Jimmy – I have not heard if you are going to the meeting tomorrow. If we don’t have a quorum, the entire process will be moot and the ambulance won’t get the funding until 2019.”
According to KRS 61.810 (2), “Any series of less than quorum meetings, where the members attending one (1) or more of the meetings collectively constitute at least a quorum of the members of the public agency and where the meetings are held for the purpose of avoiding the requirements of subsection (1) of this section, shall be subject to the requirements of subsection (1) of this section.”
The Attorney General’s Office did not address The Interior Journal’s complaint concerning less-than-quorum meetings in its ruling, but it did state that “if a quorum of the board met on July 20 in response to the invitation from Mr. Floro, that meeting would have constituted a violation of the Open Meetings requirements for (a) special meeting.”
As part of those requirements, a public agency is supposed to give written/electronic notice to local media 24 hours prior to the meeting, with details on the date, time and place where it will be held.
“Neither The Interior Journal, nor the local radio station, were given notice of a 6 p.m. special meeting on July 20 at Naren James’ office,” according to the newspaper’s complaint.
The conclusion of the original complaint calls for the ambulance board to remedy the open meetings violations by providing documentation of any and all meetings that have taken place outside of regular scheduled meetings and to conduct a working session solely for the purpose of educating board members on the Kentucky Open Meetings Act.
“There is certainly an inference that could be drawn from the emails provided to this office that members of the board have violated the requirements of the Open Meetings Act, but the evidence on record in this appeal marginally fails to transform inference into a definite conclusion,” the ruling reads.

Board says failure to respond was unintentional

Since no initial response was given by the ambulance board, The Interior Journal asked board members during their Oct. 17 meeting to answer to the allegations in the complaint so that the public can be made aware their position.
According to Defosset, some board members, including himself, were not aware that an appeal had been filed.
“So the response was not an intentional non-response. The response was because we didn’t know, we were not informed as a body,” he said. “To call for a conclusion tonight, I think, is unfair. I vote and I suggest to allow the board to seek counsel and to hopefully respond to the (newspaper) and the attorney general in November.”
As the presiding officer of the board, the complaint and appeal were sent to Chairman Jerry Shelton, who told board members Monday that he spoke with the AG’s office when the appeal was filed and told them he had no access to any additional information.
“I told him the only information I have is what’s been provided to me through these emails,” Shelton said. “That’s all the information I know. He said ‘you have three days to present this other information’ and well, I have no other information. I have nothing else to provide.”
Shelton and fellow board members Billy Phillips and Larry Yantz do not use email to correspond with other board members, according to the open records response from the board.
Defosset said there are ramifications well beyond the acknowledgement of whether or not the meetings occurred.
“I think it’s prudent that we seek counsel before we discuss this further,” he said. “I want to make sure that our response doesn’t lead us down a path to things that could damage the rescue squads at large in the county. It’s not about us.”
Floro said the board had no intention of violating the open meetings act.
“We tried to meet the intent of the open records law as best we could but I would agree, very quickly this week, if we could seek the advice of the county attorney to make sure these folks out there (ambulance services) are protected. I would agree that it’s not about us personally.”