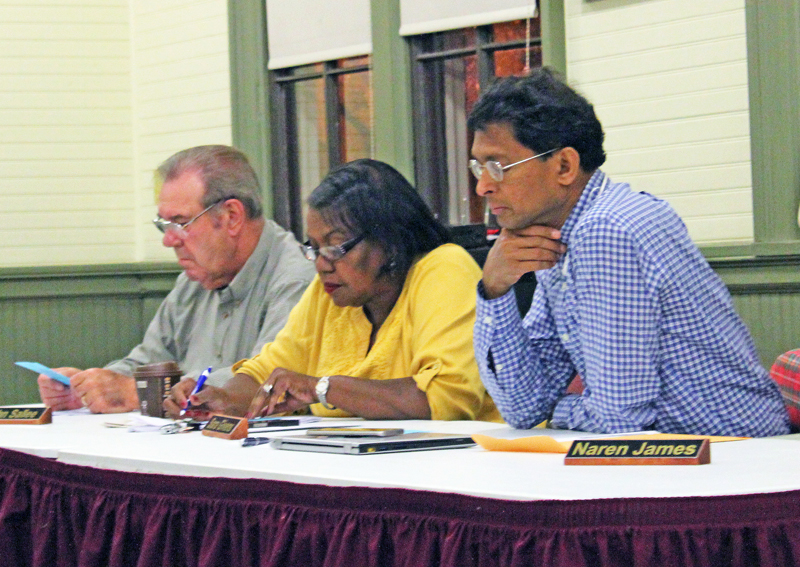 STANFORD – A newly formed code enforcement team has made progress in tackling some of the city’s property problems – a top priority for council members this year.
The team, comprised of Stanford Fire Chief Scott Maples, firefighter Dustin Gonyer, Police Chief Zach Middleton and Police Officer Johnny Williams, is one Mayor Eddie Carter said he has a lot of confidence in as he asked the council to appoint Maples and Gonyer as code enforcement officers during the September regular meeting.
Carter said Gonyer will be paid out of the fire budget for up to 20 hours of work per week and he and Maples will enforce and oversee all of the ordinances.
“I think the intent is to remove any appearance of favoritism when dealing with enforcement and so if they’re going to be direct city officers on our behalf, it’s going to be extremely important that these things be managed (consistently),” said Council member Naren James during the Sept. 1 meeting.
City council members agreed during the meeting that the proper ordinances were already in place, and it’s just a matter of enforcing them consistently throughout the city and fairly across the board for all property owners.
Maples will also be required to sign off on people opening a new business in Stanford before the city clerk issues a business license.
“We never had that,” Carter said. “I really think it will be better moving forward.”
Maples said he isn’t required by ordinance to first submit a written complaint to property owners but it is his preference to submit one.
Since the September meeting, several property issues have been taken care of and a summary was presented to the council during the regular Oct. 6 meeting last week.
There were five properties listed in the monthly code enforcement report:
• 260 Somerset Street – property still in violation after letter, follow-up investigation and warning. Submitted to city attorney for daily fine.
• Martin Luther King Street (abandoned house beside 204) – letter sent to owner, owner moved from listed address, in process.
• 101 Darst Street – letter sent, pending follow-up investigation.
• 103 Darst Street – letter send, pending follow-up investigation.
• 306 Choctaw Trail – letter sent, follow-up investigation, warning given, property was cleaned.
Maples added that some property issues have been resolved just by talking to owners.
“I think it’s working pretty good,” Carter said. “I think it’s a good team and things are running smoother all the time. We’re moving forward.”

ISO Rating Improves
Stanford residents will likely see a reduction in the cost of their homeowner’s insurance now that the city has received an improved fire protection classification.
Stanford Fire Chief Scott Maples said a recent evaluation by the Internal Organization for Standardization (ISO) determined that the city has improved its Public Protection Class (PPC) from a Class 4 to a Class 3.
Expanded community and public education as well as improved response times are two of several factors that Stanford Fire Chief Scott Maples said helped bring the PPC down to a Class 3.
Maples said of the 27,198 fire departments in the United States, only 3,265 are rated as a Class 3.
In other business, City Attorney Christopher Reed:
• Informed city council members that the annexation of Westwood Drive was officially enacted as of Oct. 6 and residents will be responsible for switching over their trash pick-up service.