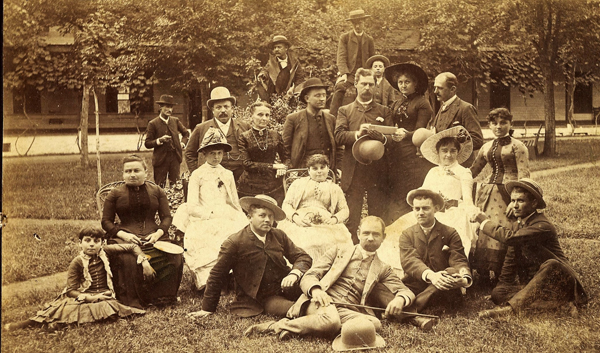 Photos courtesy of John Haworth  ABOVE is a photo taken on the Crab Orchard Springs main lawn in 1886 which features J.C. King, back left, and owner, Mr Haldeman, to the left of J.C. King, in a light bowler. 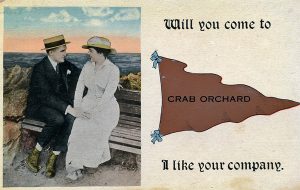 CRAB ORCHARD – A Crab Orchard family is hoping to gather a group of relatives for the first time since the Civil War.
The reunion of the King family is calling for all descendants of Harbert King Sr. (1779-1848) and Mary Owsley (1791-1846).
The King family has deep roots in Crab Orchard and today they spread out across the entire country. But with the help of a couple local family members, the Kings will finally have a family reunion – for the first time in 154 years.
“It’s really going to be exciting,” said Mary Williamson, a coordinator of the event. “What’s really interesting about the whole thing is that none of us have met. We’ve emailed but most of the people I’ve never even talked to on the phone.”
Williamson was approached about the reunion by Robert King, her cousin from Lexington. She didn’t know King, but he was able to find him through another long-lost cousin, Tad Campbell, of California. Williamson had found Campbell through a website of his and the two were able to make contact.
After talking, King told Williamson he would like to see the family come together for a reunion but didn’t have the means to do so. That’s when Williamson got to work making plans, finding relatives and contacting them to make the reunion happen – a plan that’s been a year in the making.
Cousins of Williamson’s are traveling from as far as California,Texas, Georgia, New York, Massachusetts and Ohio to come to attend the reunion. Williamson will be traveling to Lincoln County from her home in Columbus, Indiana.
However, there is still one King family relative who resides in Crab Orchard; Jimmy Gover is the great-great-grandson of Harbert King Jr., son of Harbert King Sr.
He said to his knowledge he’s one of the few remaining King descendants that stayed in the area.
“I’m an only child in kind of a small family so I’m anxious to meet the extended kin family,” Gover said.
All of the cousins share Harbert King Sr. and Mary Owsley as third great grandparents. The couple had eight children. The third oldest child, William Mason King (1813-1891) is Williamson’s great-great-grandfather.
“My ancestor fought for the Union. After the war, he couldn’t stay in Kentucky so he had to move and bring his family to Indiana,” Williamson said. “Where his farm was at, I probably don’t live but just a half hour. That’s how our line of the King family got to Indiana.”
Back in the 1800’s, the King family was well-known in Crab Orchard. James Calvin King, son of Harbert King Jr. –the seventh child to Harbert King Sr. and Mary Owsley – became the Superintendent of the Crab Orchard Springs Resort and Spa in 1882.
Crab Orchard Springs was a happening place to be in late 1800’s. People traveled from all over the world to experience the healing powers of the “curative” springs located in Crab Orchard. The Springs Resort and Spa was open until the early 1930’s during the Great Depression.
James Calvin King was the Superintendent of the resort during the height of it’s hay-day until around 1892, according to the great-grandson of James Calvin King, John Haworth of Boston.
After the Civil War the family split ways.
“The relatives that were with the Union and the relatives that were with the Confederates have not been together since that point in time,” Williamson said.
Williamson said the upcoming family gathering won’t be a typical reunion where you, “bring a crockpot to a shelter house.” She said all of the major historians from each line in the family will be coming out to share their knowledge of the family tree.
The reunion is taking place Oct. 21 – 23 at the Givens House located at 402 Lancaster St. in Stanford.
Friday of the reunion, Haworth will share a presentation of photos he was willed that were taken of the family throughout history.
The presentation will be at 2 p.m. at the Stanford Library and is titled “Portrait of a family.” The presentation will be split into two parts with the first being about the general history of the King family and the second about the James Calvin King family history and how they moved to Oklahoma.
The following day, Williamson said she would like everyone in the family to meet at the Givens House for a family photo at 10 a.m. After the photo and some mingling, The Bluebird is catering a meal at 11:30 a.m.
That same day at 1:30 p.m., the family will attend another presentation at the library titled “Brothers in Uniform.” Lincoln’s Property Value Administrator David Gamble and Tad Campbell, a King cousin from California, will be presenting information about the King family during the Civil War.
Anyone with questions about the reunion can contact Williamson at rlwmkw@att.net.