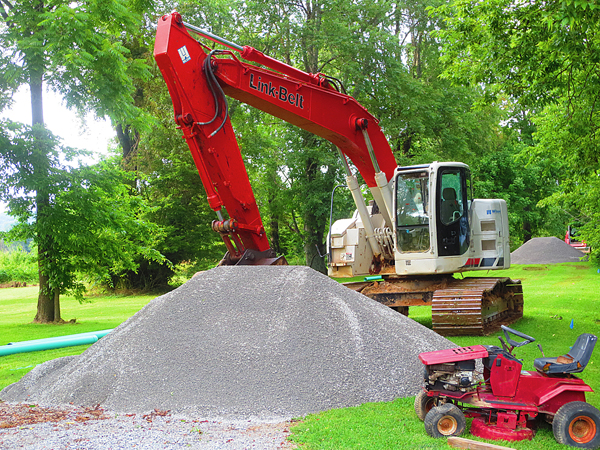 HUSTONVILLE –  An issue previously raised by some residents regarding a major sewer project in the west end of the county resurfaced during Hustonville City Council’s regular meeting last week. But sanitation officials say it’s an issue that is out of their hands.
Prior to the construction installing a new sanitary system to Hustonville and parts of the U.S. 127 corridor, some local residents – most of whom are accustomed to using septic tank systems – voiced concern over mandatory hook-ups to the new sewer line.
Last August, officials associated with the sewer project visited Hustonville City Hall to answer questions from residents and council members and to correct potential misinformation or confusion.
Judge-Executive Jim Adams, Sanitation District Board Chairman Bill Payne and engineer Luther Galloway addressed major concerns and explained the sewer construction process, while assuring residents that households requiring a pump would not be mandated to hook up to the new line.
But last week, Mayor David Peyton said according to Lincoln County’s Sewer Use ordinance that was drafted and adopted over the summer, if a public sewer line is available, residents are required to hook up to it, whether a pump is necessary or not.
It wasn’t until officials began creating the Sewer Use ordinance that they realized state plumbing codes mandate residents to hook up to the public sewer line if it is available, according to Sanitation District Chairman Bill Payne.
“As we researched the issue more thoroughly, the state plumbing codes say that if sewer is available then you need to hook up, cost or no cost,” Payne said during a phone interview this week. “There’s not much I can do about that.”
Payne said the term “available” means that the tap must be within 200 feet of a house.
“That’s a direct measurement,” he said.
If a residence falls outside of the 200 feet threshold, homeowners won’t be required to hook on to the new sewer but can if they wish to, Payne added.
Police chief and local resident Fred McCoy accused the sanitation district board of “going back on their word” and reassurance that he and city council members said they were given during the August gathering.
“We’re right back to where we started, only they lied to us,” McCoy said during Hustonville’s regular city council meeting last Tuesday night. “They told us that if you required a pump, you’re not required to be on it. They didn’t say we’re going to change the rules down the road once we get this done. That’s not right.”
Peyton agreed and said he was unable to attend the last sanitation district board meeting.
“That’s exactly what my complaint was about this city signing those contracts,” McCoy said. “We’re going to end up holding the bag on all of this. It comes right back to Hustonville. Every one of you guys sat there and heard Bill Payne. You can’t tell people something and then once you get your way, go back again.”
The new sewer system was designed with gravity in mind as the main force, allowing wastewater to drain downhill from residences to a pump station where it is then pumped to Danville for treatment, Payne said.
“There are a few isolated cases where folks have plumbing in the basement and we can’t dig a line deep enough to curb that,” he said. “If that’s the case, then (a pump goes in) to lift it to the point of the tap. Once it’s in there, it travels downhill.”
Payne said AGE tried to design the system so that very few pumps would be required but there are situations where they can’t dig deep enough.
Local resident Mike Barlow, who approached the council for clarification on sewer requirements last week, is one of those isolated cases.
“You all are in a tricky situation where part of the house can be served by gravity and the basement can’t be served by gravity,” Peyton explained. “At one point, they talked about if your first floor level would gravity-feed into the system, they’d let you do that, and if you had a basement commode, you could keep that on your septic system. But that does not meet state plumbing codes,” he said.
Barlow said in order to hook up to the new system he would either have to shut off the basement bathroom and reroute all of the plumbing through the upstairs or install 250 feet of sewer line from the back right-hand corner of the house to the main line.
“Now I have to put a pump in, they have to dig up where the septic tank is, run electrical lines out to the pump, run 250 feet of line to the hook up and go under sidewalks and driveways or go around behind the house which is about 300 feet,” Barlow said. “It’s going to be a long haul.”
Barlow said the quote he recently received on the cost of construction was about $5,000.
“The way I see it, tonight, I would entertain a motion that if they don’t honor what they told us that night, then the city withdraws completely from their contract,” Peyton said. “The man stood here and told us if you had to have a pump, you didn’t have to hook up.”
Council members voted unanimously to withdraw from the contract agreement under those conditions, which would leave the day-to-day operations and fee collection services for the sewer system to someone else.
“I think we’ve covered the issue. If they don’t agree to honor what they told us then they can get their own meter readers and do everything themselves,” Peyton said.
Peyton said sewer construction in Hustonville is pretty much completed aside from paving.

In other business, the council:
• Agreed to reset the monthly meeting time to 6 p.m., starting with the regular November meeting.
• Set the city’s 2016 trick-or-treat hours for Monday, Oct. 31 from 5 to 7 p.m.