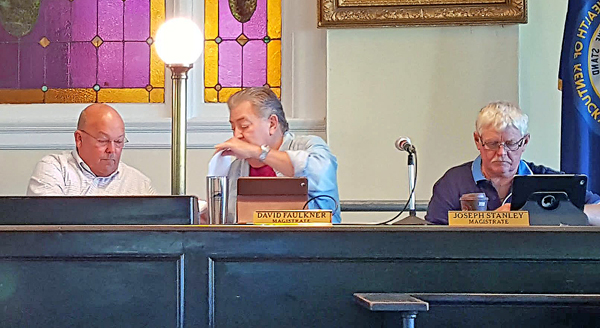 STANFORD – A Lincoln County Fiscal Court magistrate publicly opposed the hire of a road department secretary – a decision that he believes was made before it was put to a vote.

It was during the Sept. 13 meeting when magistrate David Faulkner opposed the hiring of Sheila Hopkins for a part-time secretary position at the road department, citing fiscal responsibility as his reason.

Instead of adding someone to the county payroll, Faulkner offered two other options – keeping one of the two employees and utilizing local inmates through the Lincoln County Regional Jail’s inmate work program or contracting out the mowing while moving the two employees to the road department.

“Beth (Boyle) got four proposals and I threw out the high, threw out the low, and the average between the other two was somewhere in the neighborhood of $22,000 to $25,000. Now that’s just mowing, that’s not emptying the trash or taking care of the fields.”

Faulkner said it could save the county some money by utilizing the employees already on the payroll and contracting out the mowing, instead of hiring another person and keeping two people at the park.

“The fact of the matter is, we’re adding an additional person to the Lincoln County payroll that we don’t need,” he said. “It’s an unnecessary hire and it’s not fiscally responsible for us to do that.”

Faulkner said it has nothing to do with Hopkins, who he had never met.

“Its an unnecessary hire,” he continued. “It’s not about employees, personnel or people personalities. It’s strictly about what’s fiscally responsibility of this court. We just took tax increases, that was not even a unanimous decision.”

The fiscal court voted to take the 4-percent revenue increase on property tax rates this year but the vote to pass it was 3 to 2.

Before the meeting, Faulkner said he spoke with another magistrate about the road department item on the agenda and was told Hopkins had already received word that she was hired for the position.

“My vote is no. It’s not against the person, it’s against the action,” Faulkner said during the meeting.

A motion was made by magistrate Lonnie Pruitt and seconded by Johnnie Padgett. Magistrate Joe Stanley abstained from voting, leaving Judge-Executive Jim Adams to break the tie vote to approve the hire.

As far as the hiring process, Adams said in a phone interview this week that Hopkins was told she would have the job pending approval from the fiscal court.

“I told her upon approval of the fiscal court that we would hire her,” Adams said. “She’s from Lonnie’s district and he’s known her all her life. She worked at the bank for like 25 years.”

Adams said the position had been vacant for a while and he was hoping to get two part-time college students to fill it but the 8 a.m. to 4 p.m., Monday through Friday schedule wouldn’t work out for them.

“He (Faulkner) was wanting to transfer them (park employees) but I’m not going to do that. That wouldn’t be a match,” Adams said. “I would just as soon have somebody that I thought I could use in here (judge’s office) too. We’ve cut back so much here at the courthouse, when I have somebody out it really puts some pressure on us.”

Adams said Hopkins will cross-train with the other secretaries so she can bounce between the road department and judge’s office if needed.

The idea of contracting out the mowing at First Southern Veteran’s Park is still an option the fiscal court will consider, he added.