Items from string of thefts recovered at pawn shops 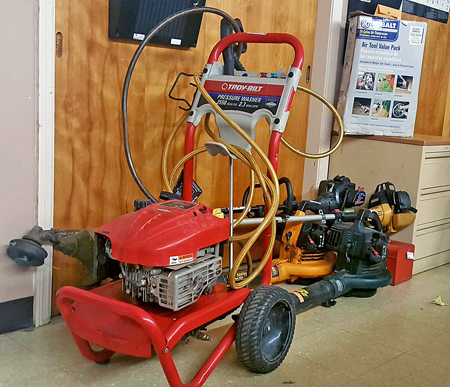 Photo by Abigail Whitehouse Items recovered from pawn shops in Lexington and Nicholasville sit at the Sheriff’s Office after an investigation connected the items to a string of burglaries in the Lincoln and Garrard County areas.

STANFORD –  Owners of several items allegedly connected to a string of burglaries in Lincoln and Garrard counties were reunited with their property owners after the Lincoln County Sheriff’s Office recovered them from pawn shops.
Sheriff’s Deputy Michael Mullins arrested the man accused with the thefts, Lajernio Robertson, 25, of Lancaster, on Sept. 5 after a search warrant was executed at his residence and several items reported stolen were discovered.
Since the arrest, Mullins said he has been able to track down several of the stolen items that were pawned by Robertson or his wife in Nicholasville at Sam’s Pawn and Double Action and in Lexington at Dan’s Discount and Top Dollar Pawn.
“Any time we have a large set like this we contact local pawn shops,” Mullins said.
Items allegedly stolen included pressure washers, power tools, weed eaters, leaf blowers and more – most of which was stolen out of cars and outbuildings in nearby subdivisions.
Robertson was arrested in Dix River Estates, where many of the thefts being  investigated occurred.
“It seems that he was hitting subdivisions with houses in close proximity and gathered it up, put it on the side of the curb and came by to pick it up,” Mullins said. “When we arrested him at Dix River Estates, we found more stuff that was gathered that he hadn’t gone to get yet.”
Mullins said the same style was used throughout the area to get the items.
“He would mainly get power tools out of outbuildings. He would get stuff out of cars such as GPS’s, expensive sunglasses. There was a computer that we recovered that was stolen out of Garrard County,” he said.
Working with the Stanford Police Department and Lancaster law enforcement, Mullins said they were able to close several open theft cases.
Mullins said Robertson was arraigned last week and the case was waived to the grand jury.
While the total value of items recovered isn’t clear, Mullins said he would guess it is close to $10,000 or more.
“It’s always a good feeling when you can get people’s things back to them that have been taken,” he said. “When we talked to this guy he did admit that he had a drug addiction that he was feeding.”
Mullins said a needle was allegedly found in Robertson’s pocket when he was arrested.