No rise in overdose deaths, but overdoses on the rise in Lincoln County 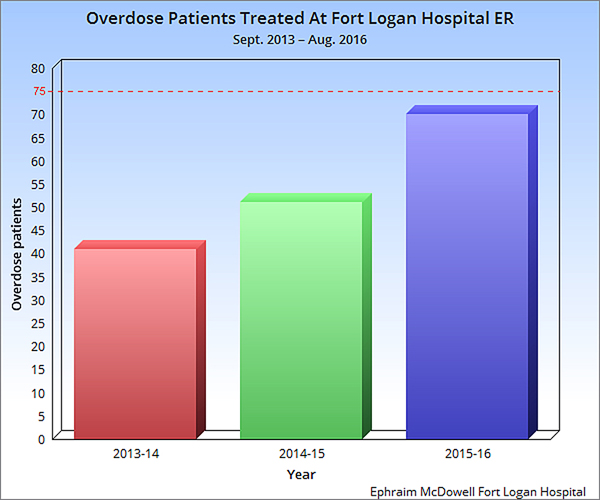 In 2000, Kentucky reported a total of 246 overdose deaths and 15 years later, that number has risen to 1,220, according to a Kentucky Injury and Research Center chart.

The number of overdose patients showing up at Fort Logan Hospital’s Emergency Department in Stanford has steadily increased since 2013, according to data provided by Ephraim McDowell Marketing Coordinator Jeremy Coconaugher.

From Sept. 2015 to April of this year, 37 of the total 70 overdose patients had been treated at the Fort Logan ER, according to information provided during a Community Action Stopping Heroin forum. That means that in the last five months, the ER has treated 33 more overdoses since the forum.

“These are patients who presented with the chief complaint of overdose,” Coconaugher said. “That (also) means it could be somebody who had a prescription and just took too many. That’s not differentiated between prescription and non-prescription.”

While the three years of numbers show a steady increase in overdoses treated at Fort Logan Hospital, Coconaugher said it’s hard to say what the emergency department will experience in the future or if it will see any waves of overdoses like those seen recently in areas across the state.

“Being an emergency department, your doors are always open. So from one minute to the next you don’t know what’s going to walk in the door. It’s hard to predict what’s going to come in.”

Just in the last month, Stanford Fire Chief Scott Maples said his emergency medical team has responded to eight overdoses – five of which were reportedly heroin overdoses and the remaining three suspected to be methamphetamine overdoses.

Of the eight overdoses, one resulted in the death of a 34-year-old Berea woman who was found unconscious in a van outside of a Danville Avenue residence on Sept. 4. According to Lincoln County Coroner Farris Marcum the woman’s death was the result of an overdose of heroin and fentanyl – a lethal combination that law enforcement says is largely responsible for the surges of overdoses in northern Kentucky, Louisville, Lexington and some smaller cities.

Officials say a number of heroin traffickers are cutting their heroin supply with fentanyl, a potent synthetic opioid said to be 50 to 100 times stronger than morphine, and is likely to blame for the recent surges of overdoses in concentrated areas. Another synthetic opioid recently found in combination with heroin is carfentanil, which is used to sedate large animals and one of the most potent opioids in the world. Carfentanil is said to be at least 100 times more powerful than fentanyl.

“People don’t know what they’re getting,” Marcum said. “They can’t read a label on the back of it.”

In 2015, there were three drug overdose deaths, according to Marcum, and as of Sept. 19 this year, there have been three overdose deaths in 2016 reported – but that number doesn’t always reflect the reality of the issue.

Marcum said depending on where the overdose occurs, patients who are transported to the nearest hospitals in surrounding counties are not reflected in Lincoln County death numbers. It also doesn’t reflect the number of overdose patients who were revived by emergency responders and refused follow-up treatment at a hospital.

One of the three deaths Marcum confirmed this year was the result of a heroin overdose, while the other two deaths involved a lethal mixture of prescription medications 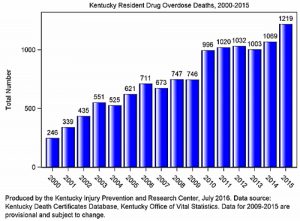 While Lincoln hasn’t experienced spikes in overdose deaths, emergency responders say they are seeing an increase in overdoses – especially over the last two years, according to Lincoln County EMS Director Ashley Powell.

“We have seen an increase in overdose calls in the last little bit, but I don’t think we’ve seen the increase like some of the surrounding areas, especially north of us,’ Powell said. ”Knock on wood, we’ve not had the increase that Montgomery County, up in that area, has had. I know one day they had, I think, nine overdoses in a four-hour period.”

But in the past two years, Powell said he’s seen an extreme increase in overdose calls.

Data from last year to this year doesn’t reflect much of a difference as far as how many times first responders have administered naloxone, or Narcan, a medication used to reverse the effects of opioid overdose, but Powell said that doesn’t necessarily mean drug usage and overdoses aren’t becoming more frequent.

“I think we’re going to see a trickle effect here,” the EMS director said. “Unfortunately, I think it is hitting younger people, more than it once did. But this really is affecting all age groups.”

Lincoln EMS hasn’t had any confirmed fentanyl-related overdoses but Powell said that doesn’t mean there haven’t been any in the area.

“There are cases we may never know about,” he said.

Powell said the mixture of heroin and fentanyl has put a financial damper on EMS and local hospitals across the state.

“The big thing we’re seeing is an increase in patients where the fentanyl is so strong that it’s taking more of the medication to reverse the effects,” he said.

Narcan is just under $50 per dosage, he said.

“So in reality, it’s not abnormal for one patient to get four doses – so you’re talking $200 per patient,” Powell said. “When legislation made it more accessible, the price of Narcan went up. It almost tripled in price.”