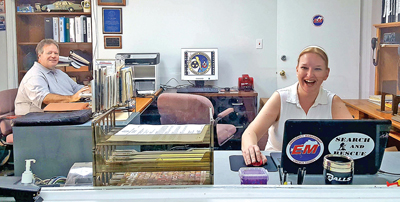 STANFORD – A new deputy director has joined the Lincoln County Emergency Management team.
After serving as a diver on the Lincoln County Search and Rescue team for several years, Trish OQuin isn’t a stranger to most elements of emergency response. But as of Sept. 4, OQuin stepped into a new role as she became deputy director for Lincoln’s Emergency Management Agency.
OQuin, 40, a Lincoln County High School graduate and veteran of the U.S. Naval Academy, said she has always loved volunteer work and serving the community and she’s excited for the opportunity to do more of that in a different role.
Following high school graduation, OQuin joined the Navy and despite the time that has passed since then, she said the skills she learned while serving as a damage controlman are ones that she will utilize as deputy director for emergency management.
“I didn’t think about it at first,” OQuin said. “Little did I know that way back when I was kind of doing stuff like this.
As a damage controlman, OQuin said she gained a variety of training and experience, from fire prevention, fire fighting and flooding response to hazmat and chemical response.
The time she has spent as a volunteer for the local search and rescue team has also helped prepare her for the new job, she said.
“I like volunteering and trying to help out my community,” she said. “I already have the basic search and rescue, human tracking, lost person behavior and of course, the diving.”
Eager to add to those skills, OQuin said she will soon participate in new deputy director training provided by Kentucky Emergency Management as well as Public Information Officer training.
“There is also damage assessment training,” she said. “Actually Donnie is certified to teach that and he’d like to get a class together here in Lincoln County, you just have to have enough people to do it.”
Working alongside all of the county’s other emergency response agencies, from law enforcement to fire departments, OQuin said she pretty much enjoys every aspect of deputy director since she officially started Sept. 4.
OQuin replaces former deputy director Jeremy Blansett who resigned to take a position with Kentucky Emergency Management in the western part of the state.
“I love it,” she said. “I love what I do. I didn’t even know that I had a passion for this until I got into it. I didn’t know this stuff really existed. When I joined the search and rescue team I was like ‘I would love to have a job like this.’”