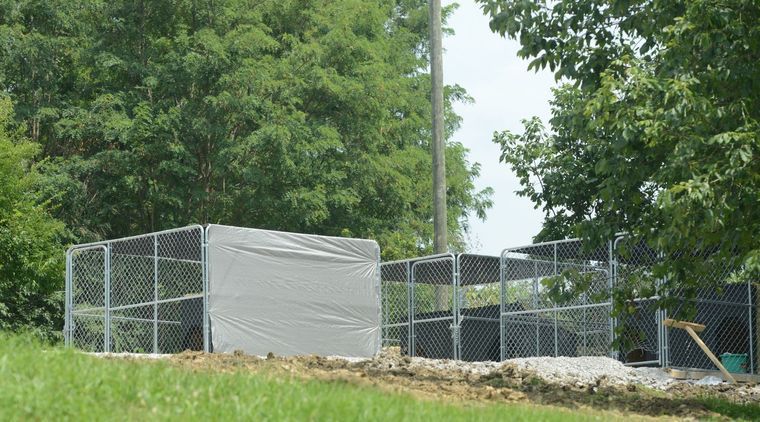 File photo The kennels shown above once housed a group of Presa Canarios owned by Christopher Pope before they escaped and attacked a Lincoln County woman last year.

STANFORD – Defendants in a lawsuit filed by the victim of a dog attack have responded to deny allegations against Lincoln and Boyle County officials and have filed a cross-claim against co-defendants who they claim should be liable.
The papers filed in mid-August by Nicholasville attorney Bruce E. Smith maintain that the county defendants are entitled to qualified official, governmental and sovereign immunity from the lawsuit.
Those defendants are Boyle County Judge-Executive Harold McKinney, Boyle Animal Control Officer Dan Turcea, Lincoln County Judge-Executive Jim Adams, Lincoln Sheriff Curt Folger and Lincoln Animal Control Officer David Snyder.
The original suit was filed July 26 in Lincoln Circuit Court by Loretta Stevens, who was severely injured by a pack of Presa Canarios owned by Christopher Pope, 25, of Danville, after they escaped a kennel on Tom Hackley Road in Lincoln County last year. Stevens was airlifted to Lexington for treatment of severe trauma and puncture wounds.
While Stevens’ suit claims the Boyle County defendants released Pope’s dogs back into his care knowing that they were dangerous and vicious, defense attorneys argue they acted “in conformity with all applicable policies, procedures, regulations, ordinances and common law” and “in good faith and without any ill motive or tortious intent.”
Futher, Smith argues the “damages about which Ms. Stevens complains, if any, were caused or brought about by an intervening or superseding cause not under the county defendants’ control” and that the complaint against them is barred “as the incident and damages complained of were unavoidable on the part of the county defendants.”
The July 26 complaint alleges Stevens was permanently injured, scarred and disfigured as a result of Pope’s negligence with regard to restraining, maintaining and caging the large dogs and seeks an unspecified amount of compensatory and punitive damages for pain and suffering, loss of earning capacity and medical expenses.
A cross-claim has also been filed against Pope and the alleged property owners who defense attorneys claim “failed to exercise ordinary care in the safekeeping of his (Pope’s) dogs” and as a direct result of their negligence, the dogs escaped and attacked Stevens. The attorneys argue the other defendants are liable for costs and judgements incurred in the lawsuit and seek dismissal of the complaint or indemnity against the co-defendants.
In addition to county defendants, Stevens’ lawsuit names Pope – currently incarcerated and lodged in the Daviess County Detention Cener – as well as Lawrence and Jennifer Hillard, who Stevens claims to be the owners of the Tom Hackley Road property. A response filed by Lawrence Hillard Aug. 24, however, states they are not the recorded deed holder of the property and claims Marlin and Jennifer Miller of Carrollton, Georgia, are the owners of the home.
Hillard not only denies owning the property, but claims he and Jennifer Hillard did not give Pope permission to build dog kennels, had no knowledge of dog kennels being built and were unaware of Pope’s criminal history in regards to narcotics and harboring vicious animals – allegations that were made in Stevens’ lawsuit.
Based on a conversation Hillard had with Stevens following her release from the hospital, the response instead argues that Stevens caused the incident.
Hillard alleges that when asked what caused the dogs to attack her, Stevens told him “she looked out her window and seen the dogs on her porch and in the yard (and) she run out the door waving her arms in the air and stomping her feet and tried to, in her words, ‘shew the dogs off like you would chickens.’”
Hillard also claims that when he and Stevens walked back to look at the dog kennels, Stevens told him, “Chris Pope really was trying to keep the dogs in the kennel by putting two locks on the doors instead of one, this is just an unfortunate accident.”
The response states that since the Hillards had no part in the attack or approval of the kennels, they owe nothing to Stevens and request their names be removed from the lawsuit.
Pope has not yet responded to the allegations in Steven’s complaint.