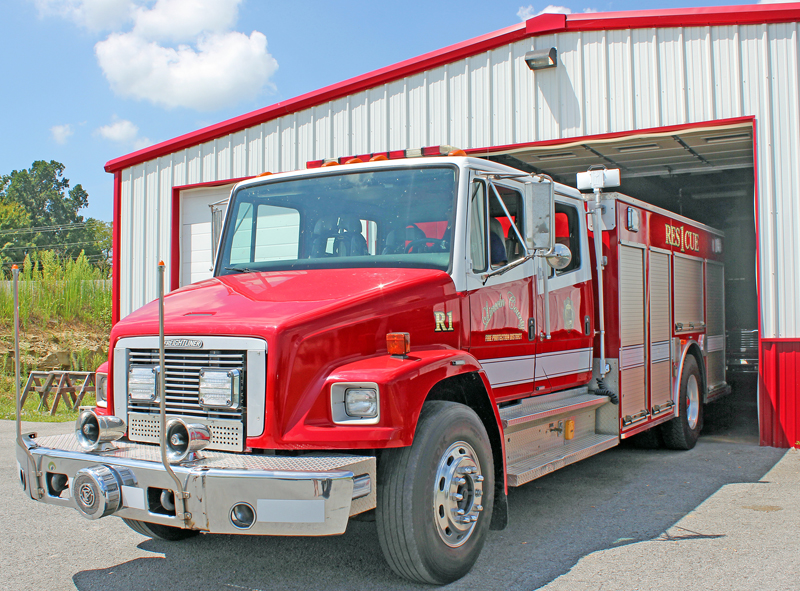 STANFORD – When the Lincoln County Fire Department recently evaluated it’s rescue performance, Lincoln Fire Station No. 1 found there was a need for more space when it came to technical rescue operations and transporting the large equipment needed for it – a problem solved by the station’s new Rescue 1 truck.
One scenario in which a technical rescue operation might be needed would be if a building collapsed and victims were trapped inside of a weakened structure, according to Capt. John Hasty.
“It’s not safe for us to just go into a residence that’s weakened at some point to pull somebody out,” he said.
That’s a main reason behind the station’s focus on building collapse response and with the new truck, Hasty said they can accomplish a lot more when it comes to technical rescue.
“Our concern is that in the county there is no type of trench rescue, no type of building collapse. We do small-scale stuff but we don’t do any type of high-angle and that’s stuff we need to focus on,” Hasty said.
“Now we can pursue that now that we have the bigger truck and we’re able to carry double the amount of equipment so we can better advance our rescue operations.
Hasty said the station plans to beef up equipment for building collapse, trench rescue and rope rescue.
“We currently do low-angle rope rescue but we’d like to take that a little further and start doing high-angle rescue in the county,” he said.
Technical rope rescue is broken down into three parts – low, steep and high angle rescue – all determined by the degree of slope in rescue situations.
Station No. 1 firefighters got a chance to practice their building collapse skills for the first time this year during a recent mock tornado drill at the fairgrounds.
“Luckily the scenario hit home for us,” Hasty said. “The fire service changes by the day. It’s our responsibility to stay on top of it. The public is our customer so we have to be able to provide good customer service to the citizens of Lincoln County.”
The goal is to continually take operations and firefighters’ skills further, Hasty said.
Station No. 1 isn’t the only station in the county to acquire a rescue truck, he added.
“We sold our small rescue truck to Station No. 4 in McKinney and Station No. 5 in Waynesburg recently bought a rescue truck as well,” Hasty said. “So now, Lincoln County operates six rescue trucks in the county. That’s a big improvement for us.”
Rescue trucks carry a variety of equipment including auto extrication tools, rope, jacks, an axe and more.
Station No.1’s new truck is what Hasty called a “dry” rescue truck because it doesn’t carry water and is solely for rescue operations.
Once the new truck was purchased, the Lincoln County Fire Board bought the station a tool package complete with a bigger set of TNT extrication tools that can cut Boron steel, Hasty said.
“The Boron steel is just a really hard steel that a lot of tools, unless you buy a bigger set, they won’t cut it,” he said. “Now we currently have the bigger set of jaws capable of cutting Boron.”
The station essentially doubled it’s stock of auto extrication equipment altogether, Hasty said.
“Michael Mullins has been a really big help. He completely re-did the lighting on it. He saved us over $1,000 doing that. I’ve got to say a big ‘thank you’ to him,” Hasty said.
The truck alone cost about $29,000 and the refurb of it cost about $12,000.
“I’m hoping within the next month or so we will receive our additional equipment that we purchased and we can start getting these guys into training classes,” he said.
Station No. 1 firefighters like Ryan Sizemore are eager to start that new training.
“It opens a whole new door for training and operations,” Sizemore said. “It will definitely help us better serve our community.”
With the new truck comes new capabilities and better means of rescuing citizens during emergency situations.
“Auto accidents are something we respond to pretty frequently,” Sizemore said. “In the event of an accident with entrapment, we are now equipped to handle these situations in a more effective manner – now we are going to be more capable of handling larger rescue.”
Other Station No. 1 firefighters are looking forward to furthering their rescue skills and utilizing the larger equipment needed, which the new truck can now carry for them, Hasty said.
“They are very happy,” he said. “They’re not tickled to death for the new truck necessarily, but they’re tickled to death that at the end of the day they can go to sleep and know that we’re pursuing a better service for the citizens of Lincoln County and that’s what it’s all about.” 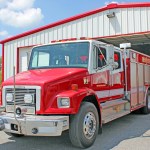 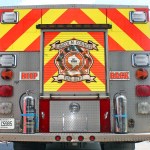 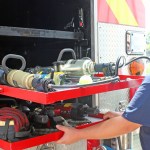 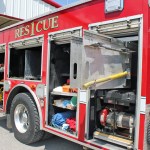