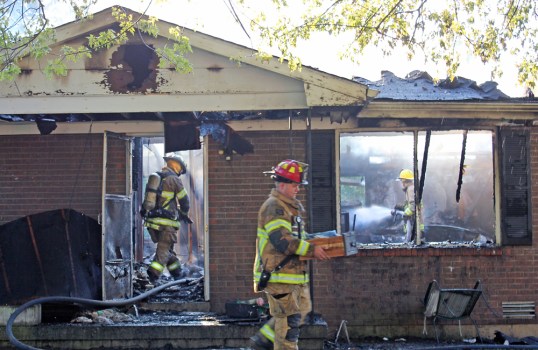 STANFORD – A small pile of photographs and a few other personal items is all that was left after a fire destroyed a Lincoln County home Monday morning.

Firefighters from all Lincoln County stations responded to Spring Valley Road at about 7 a.m. on Sept. 5 and spent about an hour extinguishing the fire, the cause of which remains under investigation at this time.

No one was inside the residence and no injuries were reported, according to Lt. Tyler Smith with Lincoln County Fire Station No. 3, but homeowner Lana King was on scene Monday morning as firefighters worked to put out the flames and salvage what they could from inside her residence.

With no fire hydrants nearby, water had to be transported from Danville, according to firefighters.

King and family members sifted through photographs in the yard beside the home as firefighters carried out boxes of items they were able to recover.

“That’s stuff you can’t replace,” said King’ sister-in-law Ronda Davis as she pointed at the items scattered across the lawn. “That’s all she’s got left right there.”

While the house was a total loss, Capt. John Hasty with Lincoln County Fire Station No. 1 said firefighters were able to recover a few of Kings’ items, including some clothing and family photographs.

“We got one picture of her kids at a very young age and we recovered a bunch more pictures,” Hasty said.

King was staying at her sister’s house when the fire broke out, according to her sister-in-law.

Family members said they are already organizing a fundraiser for King. More details on the fundraiser are expected and will be added to this story as soon as they are available.