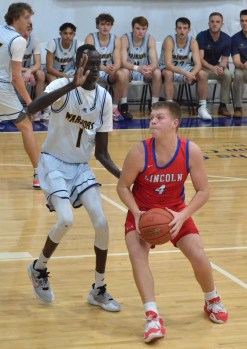 Jackson Sims of Lincoln County goes to the basket against Danville’s Christian’s Lual Ayiei during the first quarter Monday. Photo by Mike Marsee 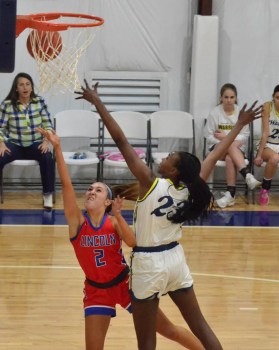 The grind is going just fine for the Lincoln County boys.

Through brutal battles in district play and tough tests against teams from the rest of the region and beyond, the Patriots are putting together an impressive midseason run.

That run continued with two wins this week, as Lincoln started and finished strong Monday night in a 59-52 win over 45th District rival Danville Christian, then stifled a dangerous Madison Central team in a 52-42 victory Tuesday night.

The Patriots have strung together 10 consecutive victories — the last four in a span of eight days — for their longest winning streak in nine seasons.

They are firmly atop the standings in a hotly competitive district, up by two in the loss column halfway through their district schedule, and coach Jeff Jackson knows they are fortunate to be there.

“It’s crazy. You’ve got to bring your ‘A’ game every game,” Jackson said.

Lincoln (16-5, 4-0 district) earned an “A” on half its assignment Monday at DCA, and that was just enough to give them a win in a charged atmosphere in DCA’s small gym.

“It’s a tough place to play, and they’ve got a heck of a basketball team,” Jackson said. “It was a good atmosphere to play in and try to keep preparing for what’s ahead of us.”

The Patriots opened a 17-2 lead in the first quarter, were overtaken by halftime and trailed by 12 in the third quarter before outscoring the Warriors 23-4 over the final 10 minutes.

“Those kids hit some big shots for us, and we did a really good job defensively,” Jacksons said.

“We didn’t move the ball, we didn’t make hard cuts and we didn’t execute like we needed to,” Jackson said. “We took some quick shots and didn’t do a very good job of running our offense the way we’re going to have to.”

DCA scored the final 12 points of the first half and outscored Lincoln 15-6 over the first five minutes of the second half to take their largest lead in the first of two games in eight days between the teams.

Davis and Colton Ralston scored 13 points each for Lincoln, followed by Nuckols with 12, Sims with 11 and Tramane Alcorn with 10. Sims had a game-high 10 rebounds.

Emmanuel Dut had 23 points and Noah Imfeld added 12 for DCA, which has lost five straight and is 0-6 all-time against Lincoln.

The Patriots have not allowed more than 53 points in any game in the streak that began Dec. 30 with a win over Henry Clay, and they have held four opponents to 42 or less during that span.

They pulled away from a 22-all tie at halftime, opening a double-digit lead in the final period.

Sims scored 11 points in the second half and finished with 17 to lead Lincoln, and Davis added 11 points.

The Patriots were 8 for 16 from 3-point range, and they held the Indians to 33 percent from the field.

DCA has been on an uptick since its loss to Danville in the 12th Region All “A” Classic, and the Lady Warriors continued to play well in a win over Lincoln.

The Lady Warriors led by 32-20 at halftime, then outscored the Lady Patriots 25-6 over the next 9 1/2 minutes to put the game out of reach.

“They aren’t letting off the gas,” DCA coach Billy Inmon said. “A game like this is a trap-type game, and I want them not just to win, I want them to win the way a good team should. I challenged them at halftime, and the second half I thought they came out and did that.”

Inmon said he’s pleased with the way the Lady Warriors have bounced back since the Danville defeat with wins over Estill County, Whitefield Academy and Lincoln.

“I’ve been very proud of the girls. They’re such high-character kids,” he said. “We sat down in film and watched exactly what happened, and they’ve responded incredibly and had some really big wins.”