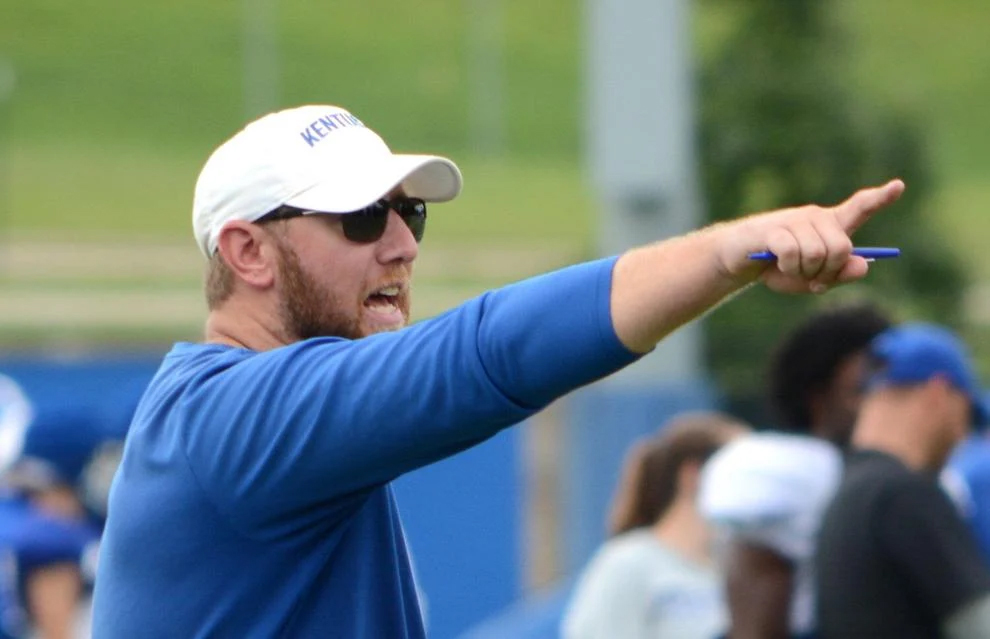 Liam Coen seeks a return to the glory days in his second stint as offensive coordinator at Kentucky. Kentucky Today photo by Keith Taylor

Liam Coen’s top priority in his second stint as Kentucky’s offensive coordinator is to get the offensive line back on track.

“That’s the number one priority when we get there is diving into that position group. Both personnel wise, schematically, fundamentally, technique, attitude, demeanor,” Coen said. “All of that needs to get (dived) into really quickly when we get there.”

During Coen’s first stint with the Wildcats two years ago, the Wildcats had an offensive line that rarely got pushed around and dominated the line of scrimmage. Coen guided an offense that helped lead the Wildcats to a 10-3 mark and a win over Iowa in the Citrus Bowl.

“We had experience (and) that was different,” Coen said. “We had three players on that offensive line that went on to play in the National Football League. One’s (Fortner) obviously starting, so those things are different. There’s a different set of experience, different personalities in that room.”

“We definitely know each other a little bit from the previous time and have been able to speak to him a little bit over the last few weeks. But, really like (Yenser) as a dude,” Coen said. “I think he’s the type of person that we’ll work well together. He’s a little bit different, obviously than Wolf (Eric Wolford). A little bit less probably in terms of some of just demeanor wise. I love Wolf.

“I think we’ll blend pretty well together. Excited about listening to him in terms of how he’s teaching some things. And then for us to get on the same page about how ultimately we’d like it to be done.”

In addition to getting the offensive line back in rhythm, Coen added that running the football also needs to improve.

“I think we’d all agree that we need to be able to run the football better and protect the quarterback better. So those are the two things that we’re going to get together and talk about and be able to kind of figure this thing out.”