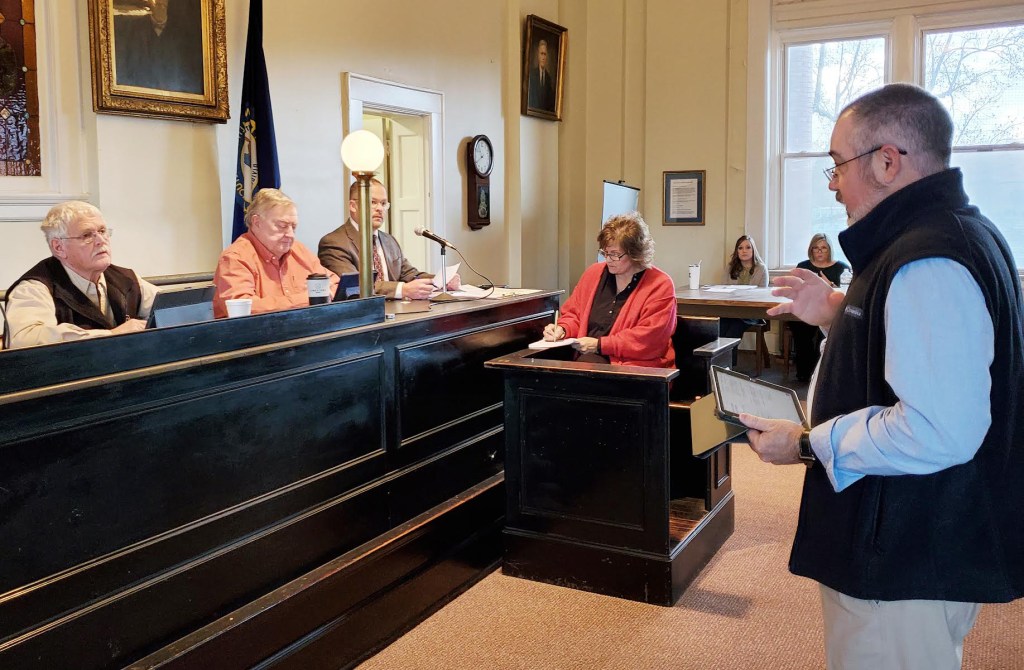 STANFORD – The Lincoln County Fiscal Court has approved the first reading of an ordinance that would make the Sheriff’s Office a fee pooling system.

“It just means that all moneys that come into the Sheriff’s Office will not be spent out through the sheriff and checks written from that office, all of that money will be turned over on a monthly basis to the County Treasurer,” Day said. “The County Treasurer then will get all the invoices the Sheriff’s Office owes, whether its gas, office supplies, and will pay them.”

Day said the biggest change is that all of the Sheriff’s Office’s income will flow through the Lincoln County Treasurer.

County Treasurer Mary Hopkins said all of the Sheriff’s Office’s financial activity will be recorded under the county’s general fund.

“There’s a number of counties that are doing this,” Day said last week. “It doesn’t change that much other than instead of them paying their bills, their bills will be submitted and go through the normal course and we will pay their bills. We will still set the salary cap and all of that…”

Day said there are a lot of sheriff’s in Kentucky that oppose the system.

“The only thing that changes is they’re no longer responsible for a whole lot of bookkeeping,” he said.

Judge-Executive Woods Adams said it adds to the unity of the county and shows a level of trust that Sheriff Shawn Hines has in the fiscal court.

“He’s willing to give up a lot of transparency because he has nothing to hide, just wanting to do good things for people,” Adams said.

Sheriff Shawn Hines said most sheriff’s that have opposed fee pooling have done so based solely on ego.

“The one thing that I’ve seen and reason why Sheriff’s don’t do this is ego; I don’t have that,” Hines said. “I do pledge one thing and that’s civility and working together and right now, I trust everyone under this roof and I want to continue that. It is giving up some power from the Sheriff’s Office, that’s the reason it’s called an office, is because it’s independent of everything. But the way I see it, it’s still taxpayer money and we all need to be good stewards of it.”

Hines said it offers a level of transparency.

“I want to run the best Sheriff’s Office but I’ve got to have help from the best fiscal court to do it,” he said. “…if it’s benefiting everyone, why not do it?”

Hines said he spoke to the Oldham County Sheriff who said they have a premier sheriff’s department and it is because of their fiscal court and fee pooling.

Those offices that have a fee pooling system in place were not as negatively affected by COVID, Hines added.

Magistrate David Faulkner said during the Jan. 3 meeting that it’s something the fiscal court has discussed for years.

“There was a lot of pushback from the sheriff’s department. I’ve never been a sheriff so I don’t know but I would think it would take a burden off of you,” Faulkner said.

Faulkner said if it doesn’t work after a few years, the ordinance can be amended or rescinded.

“It’s a great start and for the record…this is a completely different atmosphere and a new beginning for this local government. The 16 years that I’ve been here I’ve never seen the willingness to cooperate between different branches the way I have just in the last six months, and it’s refreshing,” he said.

Hopkins said when most departments move to a fee pooling system, they are doing so out of necessity to mitigate financial issues.

“You’re having fee offices that are having financial issues, or just mismanagement, cash flow issues that aren’t being managed and they have been forced to go to fee pooling under duress,” she said during the Jan. 3 meeting. “It’s a very different mindset when you’re being told ‘you don’t have a choice, you’re going to fee pool’ rather than Shawn, who is looking at all of the facts and able to make a decision on his own and asking the court to consider this because he thinks it’s going to be the best thing for his office. It’s a totally different mindset.”

Hopkins said the Sheriff’s Office will still have its own budget and annual audits.

The fiscal court voted unanimously during the Jan. 10 meeting to approve the first reading of the fee pooling ordinance.

A second reading is expected to be heard and approved during the fiscal court’s Jan. 24 meeting.

• heard a presentation from Eastman Johnson of the Bluegrass Area Development District (BGADD) on the process of updating the county’s Comprehensive Plan. The state requires the comprehensive plan to be updated every five years. The last update was in 2016. BGAAD will provide a base study which will update information such as demographics, and design a brand/logo for the new comprehensive plan as well as social media accounts and a website to update the public on progress. The plan will include the county, the City of Crab Orchard and the City of Stanford. A steering committee of about 15 people, representative of various sectors of the local community, will be put together and will begin meeting on a monthly basis. The updating process will take about 10 months;

• approved a request from Sheriff Shawn Hines for the purchase of 11 Mobile Computer Units from L&W Technology Solutions for $4,990 each, which includes a four-year warranty. Hines said the Sheriff’s Office is currently using outdated, unreliable tablets and officers are unable to do roadside work. Instead they have had to take notes and return to the office to put information into the system;

• heard a report from Jailer Griffin Harness who has produced a new housing contract with the Casey County Jail to hold Lincoln County inmates when needed, as well as be a part of the new work release program. Magistrates approved the new contract, which is the same as those with Pulaski County and Rockcastle County. Harness said each county will be allowing him access to rosters so he can keep track of how many inmates are in each jail at any given time. Lincoln County Attorney Daryl Day reminded magistrates that they are required by law to prepare a written transportation plan for the transport of inmates;

• heard a report from Lincoln County Road Department Foreman Jeremy Vanhook who said new dump trucks will be delivered Thursday. Vanhook said he would like to see a new entrance to the road department as the current entrance is dangerous;

• heard a report from Park Director Kaycie Bandura who said the Pack the Park clothing event has ended and clothing is being sent to Family Resource Centers in the area; the Park Board meets Wed., Jan 11 at 5:30 p.m. and is beginning to plan for Spring sports.