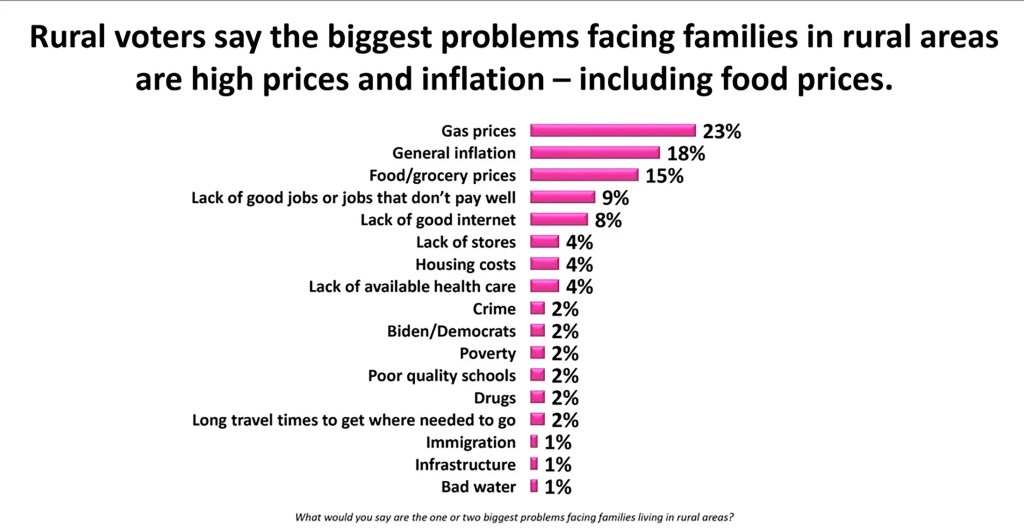 Inflation and gas prices are two of the biggest issues facing rural voters, according to a new survey commissioned by a children’s humanitarian aid organization.

The survey, commissioned by the Save the Children Action Network, the political arm of Save the Children, shows that rural residents are facing several challenges, including worries about the ability to feed their children and access to good and affordable child care.

“Rural voters deem inflation to be the greatest challenge facing rural families,” according to the survey findings. “In an open-ended question about the biggest problems facing families in rural areas, respondents are most apt to volunteer gas prices and inflation. When asked about specific problems in their area, 68% say children not having enough to eat is a serious problem.”

The survey used an online panel of rural participants distributed proportionately across the U.S.

Depending on many factors, surveys that use self-selected respondents can introduce a different set of accuracy issues compared to randomized sampling of a population, according to the Pew Center for Research.

Respondents’ concerns about inflation did match the findings of the Daily Yonder’s rural voter poll, conducted just before the November midterm election. In that poll, which used randomized sampling, the rising cost of living was the biggest issue on rural voters’ minds.

The survey dug deepest into respondents’ opinions on childcare and hunger.

More than half (55%) said that high-quality and affordable child care has become less accessible since the pandemic. Additionally, a majority (54%) of rural voters said there are only some or very few high-quality, affordable early education programs in their area.

“Congress and state legislatures have taken incremental steps to provide relief on child care and hunger but more must be done to address the scale of the crisis we see in these numbers,” Gleason said. “From boosting rural development in the farm bill to reviving the expanded child tax credit and increasing state and federal investments, rural families want to see bold leadership from their elected representatives in the new year.”

A bipartisan team of pollsters and staff from Save the Children will brief Congress on the findings of the survey on January 18.

Elizabeth Davis, a professor of applied economics at the University of Minnesota who was not associated with the polling, said the report seemed in line with what she has been hearing, particularly in rural MInnesota.

“Overall, the report seemed like it was sort of providing more evidence that rural families are in particular struggling to find high quality, affordable child care, and that’s affecting their ability to work.”

She noted that inflation has affected both food and gas prices, although the cost of gasoline has eased recently. While people in more densely populated areas may have been able to turn to public transportation, that’s not typically the case in rural areas.

“It’s not only that they drive farther, but they’re somewhat more restricted and having to drive farther,” she said. “There’s a lot of studies that look at the cost of living in different places. And housing may be less expensive in rural areas. But maybe food and gasoline are more expensive. And so it’s hard to kind of come up with one number to say, ‘This is how for a particular household inflation is impacting them versus someone else.’”

Davis said that the survey methodology could affect the findings, chiefly because people who volunteer for a survey may be different from the overall population.

“[You] do have to take it with a little bit of grain of salt that someone who has a concern might be more willing to answer these questions [and] …  than somebody for whom life is grand and there are no problems.”

The survey was conducted for the Save the Children Action Network by New Bridge Strategy, a Republican firm, and Hart Research, a Democratic firm. The poll conducted 1,006 completed interviews from November 9-20 using an online panel of American voters residing in rural counties. Seventy-two percent said they lived in a rural setting, while 28% said they lived in a small town. Rural counties were defined as those considered “mostly rural” or “completely rural” by the U.S. Census. Interviews were distributed proportionally across the country and quotas were set for key demographic subgroups, such as gender and age, based on census information. The credibility interval (which is similar to but different from a margin of error, according to the American Association of Public Opinion Research) is +3.5% for the overall national sample.