Medical cannabis law goes into effect, but getting it is not that easy 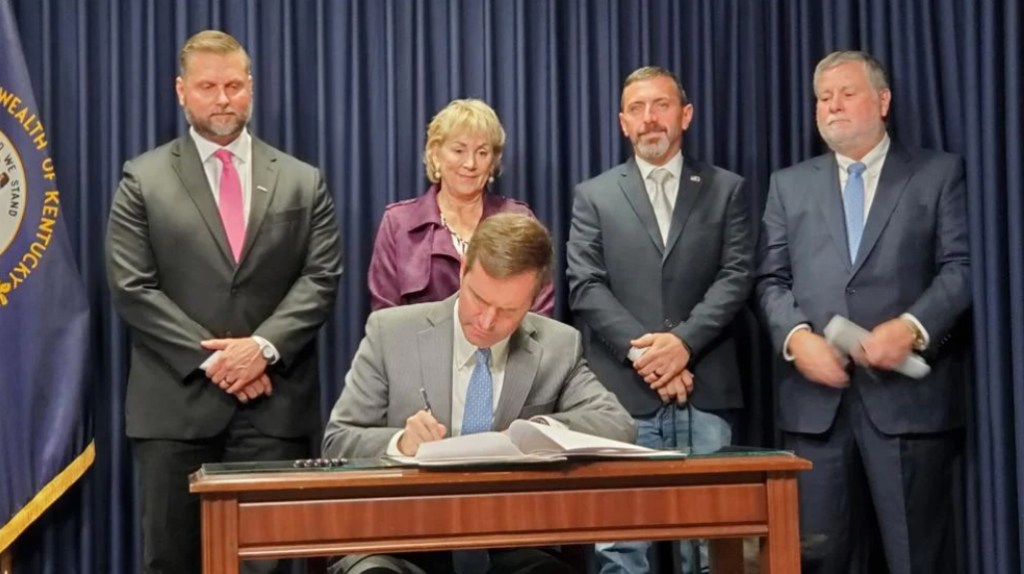 People with a medical provider’s statement saying they have at least one of 21 specified medical conditions can now possess up to eight ounces of marijuana for medicinal purposes in Kentucky, if they bought it legally in another state, under an executive order issued by Gov. Andy Beshear that took effect Jan. 1.

But for most Kentuckians, exercising the new right is not convenient, because cannabis is not legal in any form in Indiana and Tennessee, and the medical-cannabis laws of Ohio and West Virginia do not apply to out-of-state residents.

Asked about that at his year-end press conference, Beshear said, “The executive order isn’t going to make it convenient for anyone . . . What it will ensure is that they’re not a criminal” if they qualify and have eight ounces or less, the amount that is otherwise a misdemeanor in Kentucky. Beshear’s order uses his pardon power to prevent prosecution of those who qualify.

“I don’t want them to have to drive to Illinois, but that takes an act of the legislature,” Beshear said. “I want our people to be able to get it close to home.

It is unclear what the Republican-controlled General Assembly will do in reaction to the Democratic governor, who is on the ballot this year. The state Senate has twice refused to move medical-cannabis bills passed by the House, so there is some feeling that the bill should start in the Senate this time, but Senate Majority Floor Leader Damon Thayer, R-Georgetown, says it should start again in the House.

That does not suit Rep. Jason Nemes, R-Louisville, the sponsor of those two bills. “This is a Senate question; it is no longer a House question,: Nemes said Jan. 1. “There’s no reason to go through the House again, becase that would delay the prospect of the bill.” The current session is a short one, with only 30 legislative days, unlike the 60 days in even-numbered years.

Beshear said Thursday that Kentucky law-enforcement officers would have by Jan. 1 a palm card instructing them how to handle cases in which they find eight ounces or less of marijuana (any more would be a felony) possessed by someone authorized to possess it under the executive order.

The medical provider’s written certification must include their medical license number, a statement of a the provider-patient relationship, their diagnosis of the qualifying medical condition, and their dated signature. It must also have the provider’s and patient’s names, addresses and phone numbers.