Horsey opts for another year in blue and white 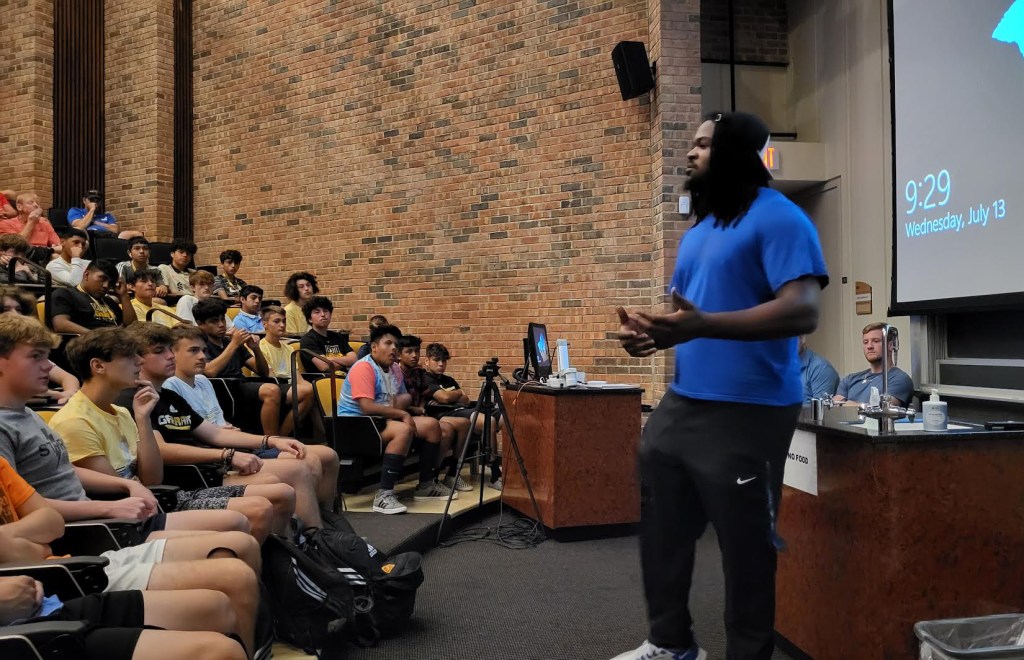 Kentucky’s offensive line got a needed boost for next season when Kenneth Horsey announced he would use his sixth year of eligibility to play for the Cats again.

He started 21 games at guard his sophomore and junior seasons before switching to left tackle in 2022 and starting 12 games. He could be moved back to guard for the 2023 season if UK finds a better option at tackle.

As he contemplates his future, I thought back to a speech I heard him give at the Centre College Soccer Camp in July to help motivate the young players.

“My approach was to be the best and let anyone stop me. Take the cards you are dealt and make the best of it,” he said. “That’s how my journey here got kind of complicated.”

Yes it did as he had heart surgery late in his senior year of high school before he even left for Kentucky just when he thought his career path had been set.

“I was not one of those people who did know what he wanted to do. I did not have a specific dream as a kid. I wasn’t sure about basketball, baseball, volleyball or even football,” Horsey said. “I did all the sports to see where my role would be best.

“My eighth grade year I played football for the first time and I realized how much fun it was. My freshman and sophomore years I went against guys older than me and had to quickly learn to step my game up. My confidence was low. I even thought about not playing football my sophomore year but a new coach had a talk with me about the potential he saw in me.”

Horsey told the soccer players he was sure “at least 99.9 percent” of them had somebody who supported them and believed in them just like his coach had in him.

“People in your life matter. You never know when your name is coming up in conversations or when a decision is being made about you,” Horsey said.

He got his first Division I scholarship offer from Texas-San Antonio before his sophomore year ended and then had close to 20 other offers by his senior year. Since he was from Orlando, he thought about staying in the state to play but about three weeks before signing day Kentucky called. He took a visit and despite experiencing snow he thought was way overrated, he “fell in love” with the school and people.

“Then the icing on the cake was playing in the SEC so you can show you can play with the top guys,” he said. “I had never before seen myself leaving Florida because I wanted my family to see me play. But I remember standing at the 50-yard line at a cold Kroger field on my visit and feeling like God told me that was exactly where I needed to be.”

Then on April 1 — two months before graduation — he felt a pain in his side that would not go away and doctors found an infection in his heart valve. Doctors told him he needed open heart surgery and he had no idea what his future might be like.

“One of the scariest feelings I have ever had was when I had to call the UK coaches and tell them I needed open heart surgery,” Horsey recalled. “The first thing they told me was they would honor my scholarship and then I knew for sure I made the right decision. I had surgery on April 7. They cracked open my sternum and put a titanium plate in my chest so I would be strong enough to take hits and play football.”

Horsey went from lifting maximum weights to having doctors tell him he could not lift over five pounds for three weeks. He said he could not even help his mother carry groceries.

“There were plenty of times I questioned my faith asking God, ‘Why me?’ It took many months for me to come to the realization that we all go through things in life for a reason and they make and shape us to be the people we are,” Horsey said.

He said he was lucky to continue his rehab at UK in June when he arrived on campus. He built endurance/conditioning and was able to put the pads on when preseason drills started his first year.

“I redshirted but just the fact I was stepping on the field meant everything to me,” Horsey said.  “After surgery, I had to use a walker to walk. I saw how quickly things can be taken from you. I would not have made it at Kentucky without my faith. I was placed in the right position to where when I got my opportunity I didn’t slack because I knew how easy that could be taken.

“Now I have played all the top teams in the country and been to bowl games. I have worked with the American Heart Association. I just had a different path but it has worked out great.”