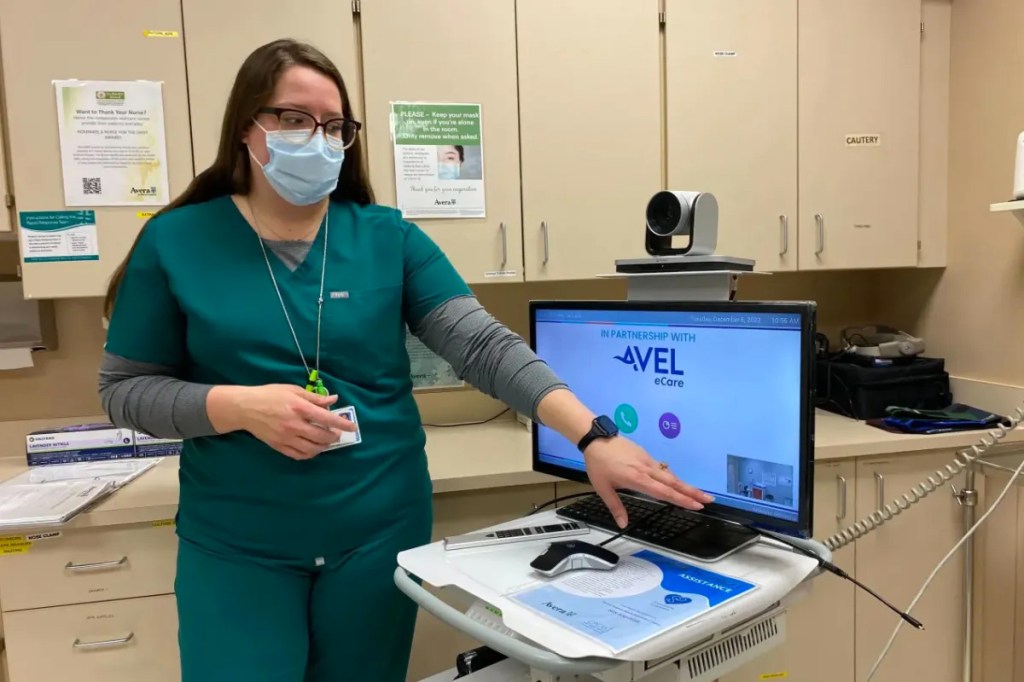 Nurse Lindee Miller stands in front of the mobile cart used for telehealth appointments for sexual assault exams at Avera St. Mary’s Hospital in Pierre, South Dakota. The camera allows Miller and her patient to communicate with a remote nurse trained in such exams. Arielle Zionts/KHN photo

Amanda Shelley was sitting in her dentist’s waiting room when she received a call from the police. A local teenage girl had been sexually assaulted and needed an exam.

Shelley, a nurse in rural Eagle County, Colorado, went to her car and called a telehealth company to arrange an appointment with a sexual assault nurse examiner, or SANE. The nurse examiners have extensive training in how to care for assault survivors and collect evidence for possible criminal prosecution.

About an hour later, Shelley met the patient at the Colorado Mountain Medical urgent care clinic in the small town of Avon. She used a tablet to connect by video with a SANE about 2,000 miles away, in New Hampshire.

The remote nurse used the video technology to speak with the patient and guide Shelley through each step of a two-hour exam. One of those steps was a colposcopy, in which Shelley used a magnifying device to closely examine the vagina and cervix. The remote nurse saw, in real time, what Shelley could see, with the help of a video camera attached to the machine.

The service, known as “teleSANE,” is new at Shelley’s hospital. Before, sexual assault patients faced mountains of obstacles — literally — when they had to travel to a hospital in another county for care.

“We’re asking them to drive maybe over snowy passes and then [be there] three to four hours for this exam and then drive back home — it’s disheartening for them,” Shelley said. “They want to start the healing process and go home and shower.”

Jennifer Pierce-Weeks is CEO of the International Association of Forensic Nurses, which created the national standards and certification programs for sexual assault nurse examiners. She said every sexual assault survivor faces health consequences. Assaults can cause physical injuries, sexually transmitted infections, unwanted pregnancies, and mental health conditions that can lead to suicide attempts and drug and alcohol misuse.

“If they are cared for on the front end, all of the risks of those things can be reduced dramatically with the right intervention,” Pierce-Weeks said.

Pierce-Weeks said there’s no comprehensive national data on the number and location of health care professionals with SANE training. But she said studies show there’s a nationwide shortage, especially in rural areas.

Some rural hospitals struggle to create or maintain in-person SANE programs because of staffing and funding shortfalls, Pierce-Weeks said.

Training costs money and takes time. If rural hospitals train nurses, they still might not have enough to provide round-the-clock coverage. And nurses in rural areas can’t practice their skills as often as those who work in busy urban hospitals.

Avel provides this service to 43 mostly rural and small-town hospitals across five states and is expanding to Indian Health Service hospitals in the Great Plains. Native Americans face high rates of sexual assault and might have to travel hours for care if they live in one of the region’s large, rural reservations.

Jen Canton, who oversees Avel’s teleSANE program, said arriving at a local hospital and being referred elsewhere can be devastating for sexual assault survivors. “You just went through what is potentially the worst moment of your life, and then you have to travel two, three hours away to another facility,” Canton said. “It takes a lot of courage to even come into the first hospital and say what happened to you and ask for help.”

Patients who receive care at hospitals without SANE programs might not receive trauma-informed care, which focuses on identifying sources of trauma, determining how those experiences may affect people’s health, and preventing the retraumatizing of patients. Emergency department staffers may not have experience with internal exams or evidence collection. They also might not know about patients’ options for involving police.

Patients who travel to a second hospital might struggle to arrange for and afford transportation or child care. Other patients don’t have the emotional bandwidth to make the trip and retell their stories.

That’s why some survivors, like Ada Sapp, don’t have an exam.

Sapp, a health care executive at Colorado Mountain Medical, was assaulted before the hospital system began its SANE program. She was shocked to learn she would need to drive 45 minutes to another county for an exam. “I didn’t feel comfortable doing that by myself,” Sapp said. “So, my husband would have had to come with me, or a friend. The logistics made it feel insurmountable.”

Shelley and several other of the hospital system’s nurses have SANE training but appreciate having telehealth support from the remote nurses with more experience. “We are a rural community and we’re not doing these every single day,” Shelley said. “A lot of my nurses would get really anxious before an exam because maybe they haven’t done one in a couple months.”

A remote “second set of eyes” increases the confidence of the in-person nurse and is reassuring to patients, she said.

Taking a break from a recent busy morning in the emergency department, nurse Lindee Miller rolled out the mobile teleSANE cart and colposcope device from Avel eCare. She pulled out a thick binder of instructions and forms and opened drawers filled with swabs, evidence tags, measuring devices, and other forensic materials.

“You’re never doing the same exam twice,” Miller said. “It’s all driven by what the patient wants to do.”

She said some patients might want only medicine to prevent pregnancy and sexually transmitted infections. Other patients opt for a head-to-toe physical exam. And some might want her to collect forensic evidence.

Federal and state laws provide funding to pay for these sexual assault exams, but some survivors are billed because of legal gaps and a lack of awareness of the rules. A proposed federal law, the No Surprises for Survivors Act, would close some of those gaps.

SANE programs, including telehealth versions aimed at rural communities, are expected to continue expanding across the country.

President Joe Biden signed a bill last year that provides $30 million to expand SANE services, especially those that use telehealth and serve rural, tribal, and other underserved communities. The law also requires the Justice Department to create a website listing the locations of the programs and grant opportunities for starting them.

KHN (Kaiser Health News) is a national newsroom that produces in-depth journalism about health issues. Together with Policy Analysis and Polling, KHN is one of the three major operating programs at KFF (Kaiser Family Foundation). KFF is an endowed nonprofit organization providing information on health issues to the nation.