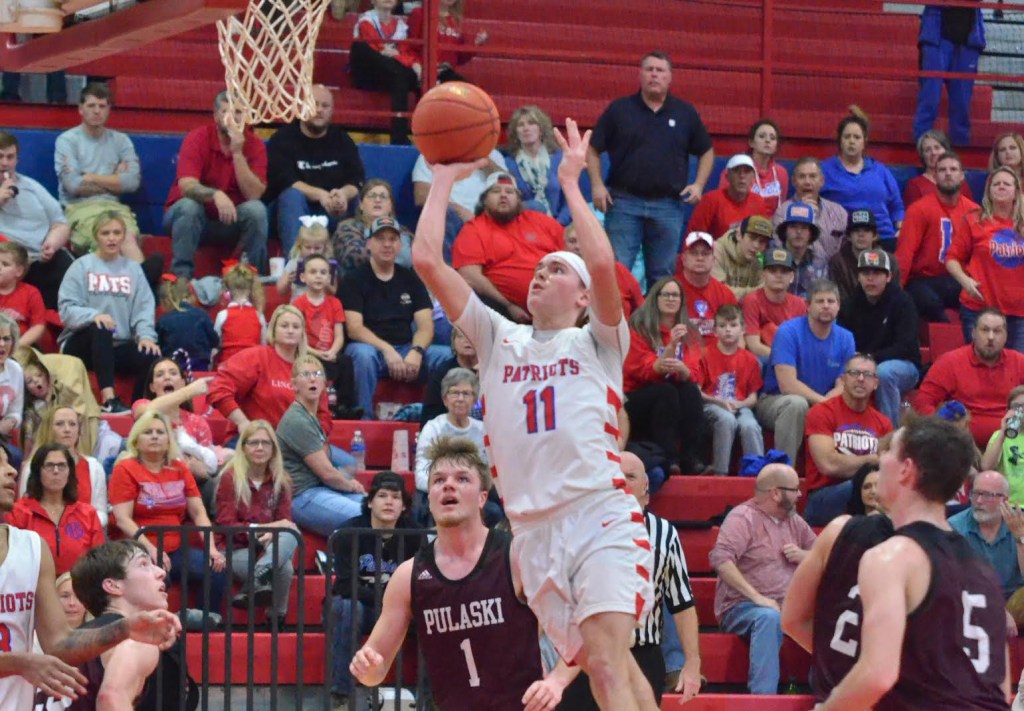 Connor Davis (11) of Lincoln County gets past Pulaski County’s Brysen Dugger (1) for a layup during the third quarter Friday. Photo by Mike Marsee

STANFORD — This game may not mean much come March, but in the first week of January, it’s a pretty big deal.

The Lincoln County boys regained some of the respect they felt they had lost in December by manhandling Pulaski County on Tuesday night in a rematch of last season’s regional final.

The Patriots controlled the game on both ends of the floor in a 76-49 victory at J.C. Eddelman Gymnasium that re-established them as the team to beat in the 12th Region.

They were firmly in that position when the season began, but they slipped to No. 4 in a recent ranking of the region’s top teams after going 7-5 over the first five weeks of their schedule.

Then they shot 62 percent from the field for a surprisingly easy win over the winningest team in the region.

“It feels good,” said guard Colton Ralston, who scored a game-high 27 points for Lincoln. “Everybody was hating on us, and we were just looking for some respect, really. I think we gained some tonight, but we’ve got a long way to go, for sure.”

Ralston lifted Lincoln to its last win over Pulaski when he hit an overtime buzzer-beater in the 12th Region Tournament title game, and he scored a game-high 27 points Tuesday to lead the host Patriots over the Maroons.

Lincoln students didn’t storm the court this time, and there were no trophies on the line. But coach Jeff Jackson said it was a significant win because the Patriots took a significant step forward.

“It’s a heck of a win. They’ve got a heck of a basketball team … and they’re playing really, really well,” Jackson said. “We played well tonight. I was really proud of our kids on both ends of the floor.”

Lincoln’s play took a turn for the better last week in the Ashland Invitational, where it went 2-1 with a semifinal loss to eventual champion Collins and a solid performance in a win over Henry Clay in the third-place game.

The Patriots (8-5) improved on that showing against Pulaski, opening a double-digit lead in the second quarter and scoring 45 points in the second half.

“I’m proud of my guys. That’s the hardest we’ve played, the best game we’ve played,” Ralston said. “I think we’re starting to come together. We grew a little bit tonight.”

Lincoln finished off the Maroons (13-2) by pressing the gas at a point in the game where they have struggled at times this season.

They closed the third quarter with 11 straight points to take a 52-32 lead, then outscored Pulaski 18-10 over the final 5:15 to put the game far out of reach.

“It just shows we can fight for four quarters now,” Lincoln guard Connor Davis said. “We’ve had some issues not finishing in the fourth quarter, so it’s good to finally finish one out.”

Davis scored all 12 of his points in the second half, and reserve guard Jalen Smith did likewise.

Lincoln hit 14 of 16 attempts from inside the 3-point line and four of seven 3-point attempts in the third and fourth quarters. The Patriots finished 8 for 18 from 3-point range — Ralston hit five 3s — and 29 for 47 overall.

And they did it while leading scorer Tramane Alcorn was held to seven points, nine below his average. Pulaski defenders flocked to Alcorn when he got the ball, but he found open teammates and they found each other.

Alcorn had five assists, Sims and four and Davis had three for Lincoln, which had 14 assists in all.

Jackson said good ball movement sparked a spurt of 14 straight points that gave the Patriots a 55-32 lead early in the fourth quarter.

“We moved the ball and broke their pressure a little bit and ran and jumped, and we had our heads up when we broke it and rotated where we were supposed to be,” he said.

Cayden Lancaster scored Pulaski’s first 13 points and finished with 25, but only one other player scored in double figures for the Maroons.

“We guarded tonight, that’s for sure,” Ralston said.

Davis said if the Patriots play Pulaski again in the regional, they can take some confidence from this game into that one.

“We’ll got out there less scared, at least for me, more confident,” he said.

However, Jackson said both teams’ records will effectively be 0-0 if they meet again. And he said if there is a rematch it’ll be another grueling game just like last year’s regional final.