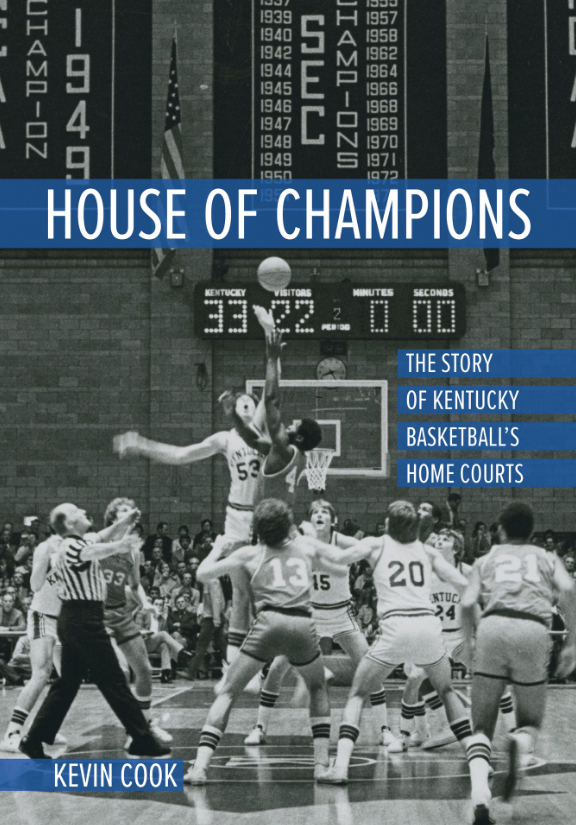 The story of Kentucky basketball is well known across the commonwealth. From the days of coach Adolph Rupp through Joe B. Hall, Rick Pitino, Tubby Smith and John Calipari, it is a story of games, coaches and players on college basketball’s biggest stage. Lesser known is the history of the buildings in which Kentucky has amassed its history.

Author Kevin Cook opens the door to the history of those venues in his book House of Champions: The Story of Kentucky Basketball’s Home Courts, to explore the past and present of the buildings that have served as the home courts for University of Kentucky basketball. Cook, an author from Jessamine County, has a graduate degree in history and has always had an interest in sports, particularly UK basketball.

Cook took an interest in places where the basketball team played, however, there was not much material written about the actual arenas where teams played. For Cook, House of Champions: The Story of Kentucky Basketball’s Home Courts fills in a missing piece of important Kentucky basketball history.

Overall, House of Champions looks at the socioeconomics and politics of an area and how that has affected the basketball program, including the UK campus’ expansion into a black community known as Adamstown for the construction of Memorial Coliseum.

“The Kentucky basketball program, specifically the men, has always been so popular that the [idea] of the program has always been building bigger and better, and ‘how do we do that,’ and then once these places are built who has access to see the games and who controls access,” said Cook.

“Overall, it is a basketball story.”

Cook takes each arena and “places” the reader in it by writing as if they were actually there in that time period, such as in 1925 or 1950.

“It takes you through “how do you get a ticket”,” explained Cook. “How do you get into the arena, what are the cheers, the traditions, the rituals that are going on, the playing of the national anthem, how are the teams introduced, taking you through a real, historical game as the “rules” have changed overtime.”

Cook explained that how the arenas are built are a reflection of the needs and wants of the community of the era in which the arena was built. For example, Cook found in his research that construction of Rupp Arena was part of a larger urban renewal project funded in part by federal grants.

This history demonstrates how sports venues continue to form and have an impact on the social, economic and political landscapes of Lexington and central Kentucky, far beyond the game.