Wildcats getting ready for Iowa rematch in Music City Bowl 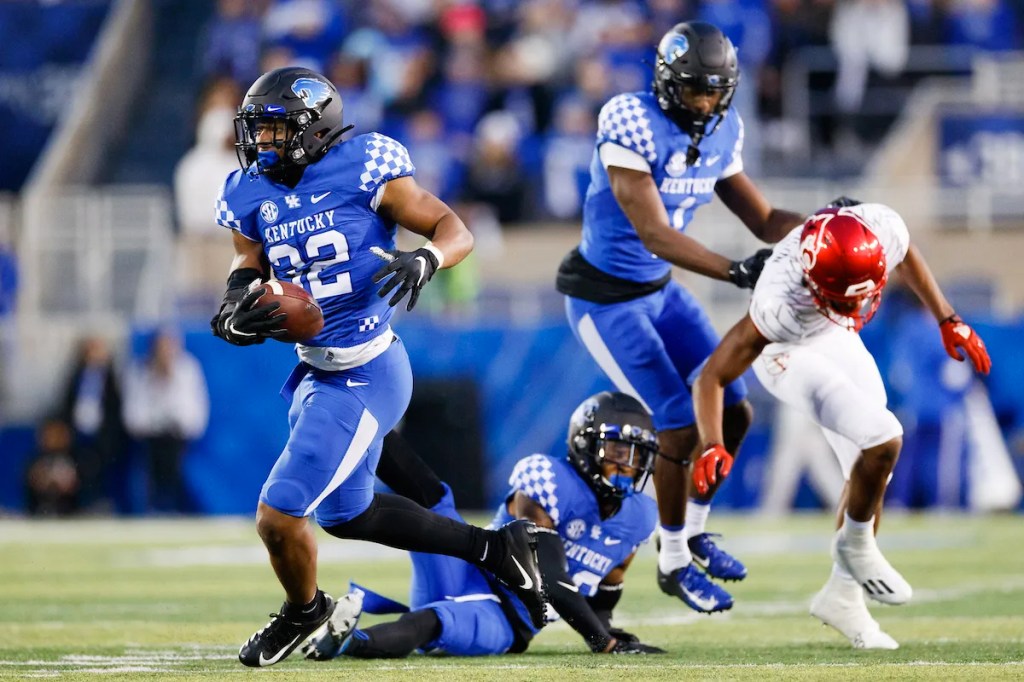 Trevin Wallace and the Kentucky defense are getting ready for a postseason rematch with Iowa. UK Athletics photo by Elliott Hess

Kentucky head coach Mark Stoops would seemingly have a number of reasons to be worried about his Cats as they prepare to face Iowa in the TransPerfect Music City Bowl in Nashville on New Year’s Eve.

The Cats will be without prominent players like quarterback Will Levis, running back Chris Rodriguez Jr. and defensive back Carrington Valentine, who have elected to not play in the game. UK has also seen a few players enter the transfer portal, none of whom will play in the bowl game.

Stoops, however, is not concerned. Instead, he’s excited to see the youth on his team getting a chance to show what they can do, which they did during Friday’s practice.

The Cats will face Iowa in a bowl game for the second time this calendar year. Kentucky beat the Hawkeyes 20-17 on January 1 in the Citrus Bowl, capping last season’s 10-3 campaign.

Levis knows that the practices and the bowl game are a huge chance for some of the younger guys to show exactly what they can bring to the Cats both in Nashville and next season.

“This is an opportunity for so many guys to kind of just prove, once and for all, last time for this season, (to) make a last impression, prove to themselves and to the coaches and to everyone else in the world what they’re capable of and what this team is capable of,” Levis said. “I know that all of these dudes who are playing are pumped to show that and are really excited to play a really good Iowa team.”

Stoops agrees with that assessment.

“I think it’s really good to get ahead for the guys for next year,” Stoops said. “We need the help, being down some guys with the transfer portal. So, there will be some opportunity for some guys and it’s going to be fun to watch.”

While Levis and Rodriguez are not playing in the bowl game, they are helping out as the Cats begin postseason practice, something that the UK coach truly appreciates.

“They both have done so much for us,” Stoops said. “Both of these guys have been playing through injury. They both were not 100 percent throughout the year. We completely understand (the players opting not to play) and support them. They’re here and want to help any way they can.”

Speaking of Levis, the biggest question remaining to be answered come Dec. 31 is, who will start at quarterback in Levis’ place in the Music City Bowl?

“We’ll see where it goes,” Stoops said. “It’s a little early for me to make that decision yet. The quarterbacks have each had their moments. Each of them have done some good. There are some areas where they need to improve. But it’s fun. It’s fun watching them, seeing them get quality reps, knowing that we’re preparing to play a game.

While there would seem to be many reasons for the UK head coach to be worried about his team entering the postseason, Stoops is optimistic about his squad and how they will embrace the challenge ahead of them.