Cats turn in another clunker in loss to UCLA 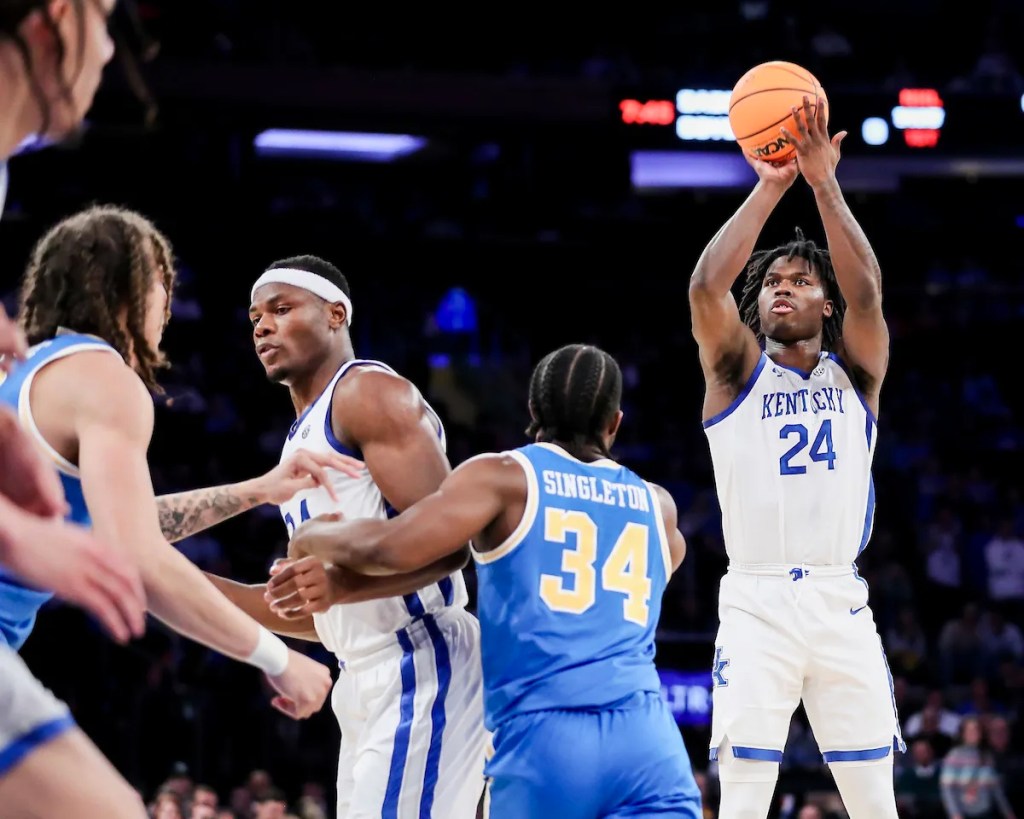 Kentucky has yet to beat a ranked opponent this season. The trend continued Saturday at Madison Square Garden in a 63-53 loss to No. 16 UCLA in the CBS Sports Classic.

The 13th-ranked Wildcats (7-3) fell behind by 13 points in the first half, fought back in the second half, before the Bruins pulled away down the stretch for their seventh consecutive victory to improve to 10-2.

Kentucky struggled offensively, shooting 32% from the field, 38% from the free-throw line and committed 18 turnovers, a season worst in all three categories.

“We missed so many open shots, what becomes demoralizing and crazy to me is we still could have won the game,” Kentucky coach John Calipari said. “They were throwing guys at Oscar (Tshiebwe) and when they do that, you’ve got to make shots, and we have good shooters. We’re one of the better 3-point shooting teams (I’ve had).”

The Kentucky coach added the double-digit miscues was because of the Bruins’ ability to make things hard for the Wildcats on the the offensive end of the floor.

“Most of it was rough play,” Calipari said. “We couldn’t bust through or get open on a screen, on a dribble handoff. You’ve got to give UCLA credit. They made the plays they had to make.”

In the midst of the struggles, Kentucky got a solid effort from freshman Chris Livingston, who led the team with a season-high 14 points and scored 11 of those in the second half to give the Cats’ offense a much-needed spark. Livingston and Lance Ware started the second half in place of Antonio Reeves and Jacob Toppin.

“We needed toughness on the floor,” Calipari said. “When they started bullying us, the game slipped and we put those other two in there (Livingston and Ware), that was kind of negated. … What he did (Livingston) to help us stay in the game is incredible.”

Calipari said the game served as a learning experience for his squad and praised Livingston’s performance against the Bruins.

“I haven’t lost faith in them,” he said. “I just think it is going to play out over a period of time. Guys that should be on the floor will be on there. That’s why my respect for Chris (Livingston) is off the charts and has been, because he’s never stopped working in practice. Other guys were having the first opportunity and now all of the sudden, he’s got the opportunity. He’s not pouting and he just showed you what he was.”

Kentucky’s mental toughness also was tested, which carried over into other aspects of the contest, Calipari said, leading to the late-game collapse.

The Kentucky coach added the Wildcats are better than what they showed on the national stage.

“Even without watching the tape, I’m disappointed,” Calipari said. “We’re better than this and we have to show it.”