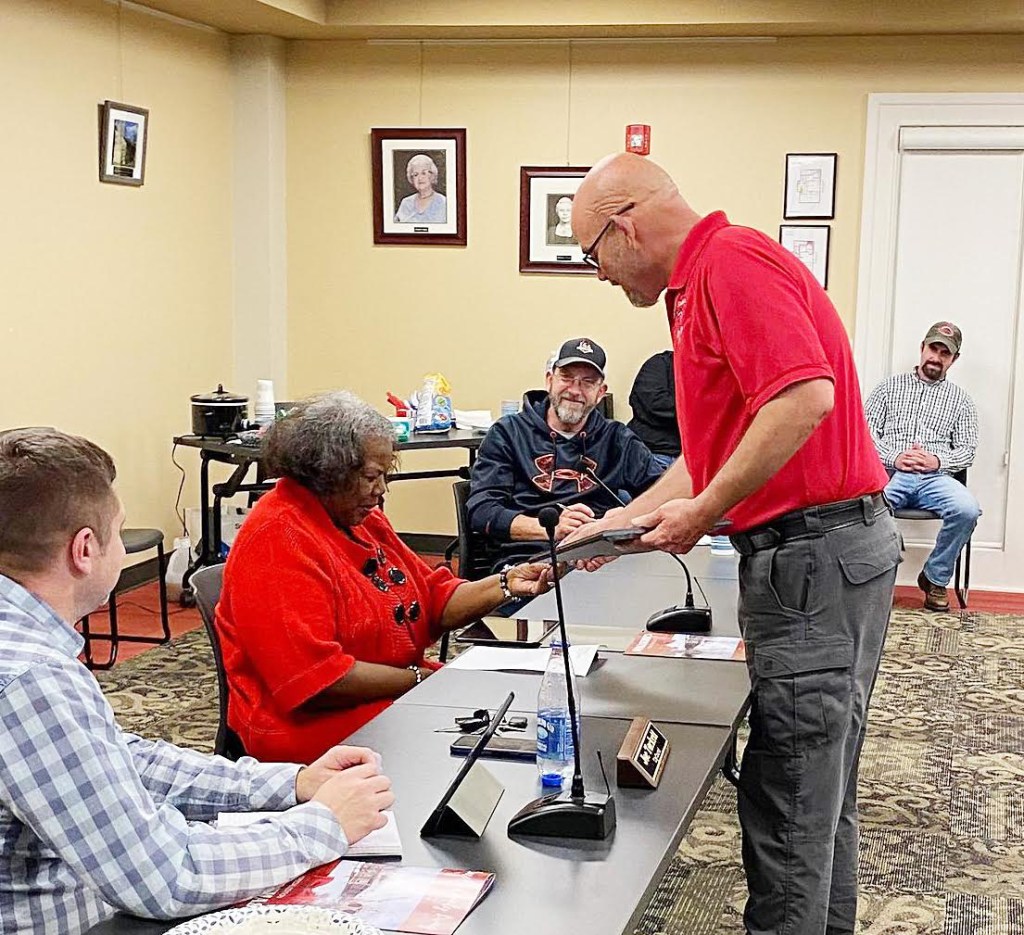 Longtime City Council member Sara Givens is recognized for her eight years of service. Stanford Mayor Dalton Miller presented her with a plaque, a wooden coin and a bouquet of flowers. Photo courtesy of the City of Stanford

STANFORD – Sara Givens has been a familiar face on the Stanford City Council for eight years and last week, the City of Stanford took a moment to recognize her service.

Givens lost her seat on the council in the November General Election but said she has enjoyed her time as a councilwoman.

“I wanted to take this time to thank everyone for being so kind to me,” Givens said during the Dec. 8 council meeting. “These eight years have been wonderful. I hope and pray that I’ve served the city well…”

Givens said she learned a lot during her time on the council.

“I love Stanford. I’ve been here all my life and I love the City of Stanford. Y’all pray for me and I’ll pray for you all,” she said.

Stanford Mayor Dalton Miller said it’s been a joy to serve with Sara over the last four years during his time on the council and serving as mayor.

“There’s no doubt in my mind that you’ve helped make a difference in this city,” Miller said. “I know if I call upon you, you will still help me if you’re able.”

Givens was presented with a certificate in recognition of her eight years of dedication to the City of Stanford.

Miller also presented Givens with a wooden coin from himself and a bouquet of flowers.

The City Council and attendees stood to give Givens a round of applause as she wiped tears from her eyes.

Councilman and former mayor Eddie Carter said he has always appreciated and been impressed by Givens’ calm and peaceful demeanor.

“I’ve never seen her upset or mad at anybody, and she’s shown so much grace and peace in anything I’ve ever been involved in with her,” Carter said. “I commend you Miss Sara, and we all love you.”

The feeling is mutual, Givens said.

“The city’s been good to me and I’m proud of all of you all, all that you do for the city,” she said. “I’m just proud of Stanford…you all are doing an amazing job in Stanford.”