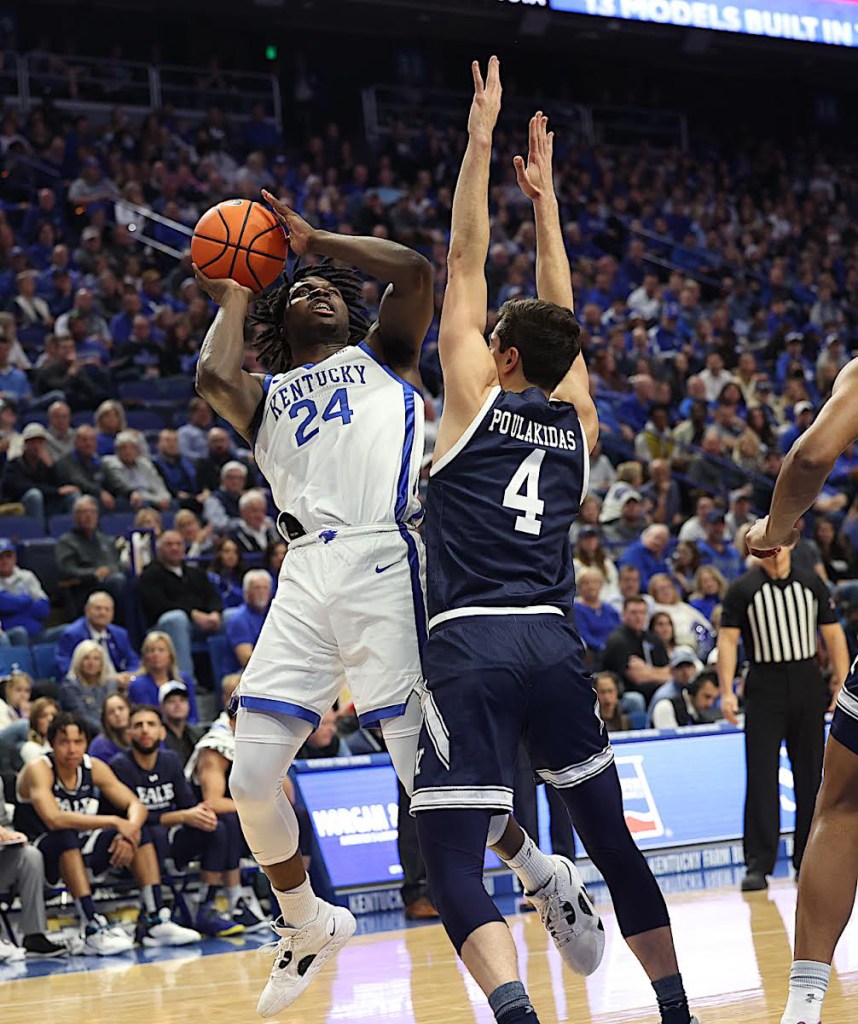 Kentucky coach John Calipari keeps insisting he needs to play freshman Chris Livingston more and determine what is the best position or positions for him.

Former UK All-American Jack Givens, who is now part of the UK Radio Network, believes Livingston has a “great upside” from what he’s seen.

“Sometimes it takes a little time for a freshman to figure it out and where are my points going to come from,” Givens said on “BBN GameDay” on WLEX-TV.  “He is doing some good stuff on defense.

“Obviously he works hard. He runs up and down the floor. He rebounds the basketball. He does deserve to be out there. But finding his shots is where he is struggling. Sometimes you just have to go get that second shot opportunity, chase down a rebound.

In last Saturday’s win over Yale, Livingston got 13 minutes and scored seven points on 3-for-5 shooting from the field. He had two assists but did not have a rebound.

Calipari wants to see Livingston continue on the path he’s on now and not get impatient for quick results.

“The only reason I took him out (against Yale), he left the best shooter on the court, he left him, and they made a 3. I said, ‘I don’t care about you missing shots, but this game is too close to have you not realize you’re not leaving that guy,’” Calipari said.

The coach said he explained to Livingston he had to coach to win the game and not worry about how any one player felt.

“Anthony Davis and Devin Booker are also in the top 10. None of them were shooting 25 balls a game here. There’s an efficiency to how they play, what they know, what they’re doing.

Livingston not only continues to accept Calipari’s coaching but appreciates his sometimes blunt honesty.

“That’s how they treat you at the next level, too. There’s no sugarcoating or coddling or babying or anything like that,” Livingston said after the Yale win. “You’ve just got to get done what you’ve got to get done. You’ve got to take advantage of the opportunity.”

Kentucky volleyball coach Craig Skinner is going to return a lot of very talented players, including Southeastern Conference Player of the Year Emma Grome and fifth-year senior Azhani Tealer, off this year’s Sweet 16 team that lost to San Diego but he is also once again adding some incredible talent.

Three Kentucky signees — Brooke Bultema (Ohio), Brooklyn Deleye (Kansas) and Ava Sarafa (Michigan) — all were named the player of the year in their state by MaxPreps.

No other school had three signees named player of the year.

All three obviously were named to the MaxPreps All-America team — only one other school also had three future players named All-American.

Sarafa was also named Michigan Division I player of the year by Prep Dig Michigan.

“Rob is really fun to watch. He is going to have people out of their seats,” Turner said on “BBN Tonight.”

Turner said all the signees are “fun to be around” and fit together well.

“It is going to be a fun group for fans to watch for the next couple of years,” Turner said. “Rob is like an Allen Iverson-type. He is dynamic. He handles the ball really good.

“He can score in bunches. He is fun to watch. He can fill it up quick.”