Wilderness Trail Jeep Club cares about those in need 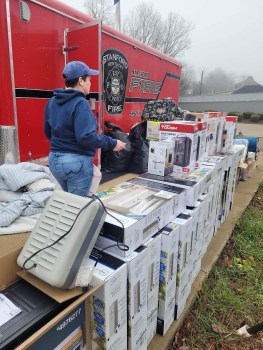 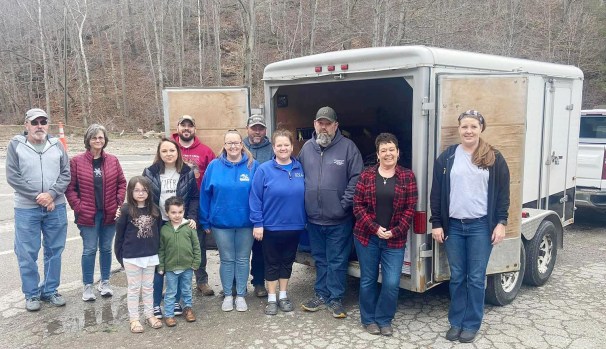 The Wilderness Trail Jeep Club delivered a trailer of heaters, blankets and other donated items to those who were impacted by the floods in Eastern Kentucky. Photo submitted

STANFORD – There’s a Jeep club in Stanford that is about much more than just a fun ride.

The Wilderness Trail Jeep Club, which is a nonprofit formed by Stanford native Debbie Ernst a little over a year ago, aims to help those in need.

“When I formed the club between myself and the newly formed club members we wanted to be known as a group of people that care about those in need,” Ernst said.

The group started small but now has about 285 members from across Kentucky, she said.

Last year, when a Food Pantry in Lancaster caught fire, the Wilderness Trail Jeep Club held a “Pack the Jeep” event which resulted in 14 Jeeps making the trip to deliver food.

“If my memory serves correctly, by the time we unpacked we had delivered 2-to-3 pallets of food to help them restock,” Ernst said.

In April last year, the group raised nearly $10,000 in donations for Habitat for Humanity to help build a home for a veteran in Stanford.

The Jeep club’s latest efforts have been focused on Eastern Kentucky, where floods left many without homes and basic needs.

After talking to her friend, Ernst said it broke her heart.

“So we decided to do the donation drive before the Christmas parade this year,” she said. “I would say, roughly guessing, we probably took $5-6,000 in blankets, heaters, coats, just anything that people wanted to throw in there.”

When the group arrived in Hindman, one of the hardest hit areas, they drove the back roads to Hazard, viewing all of the damage left from the flooding.

“That’s where we got to see the devastation. Brick homes were just knocked off their foundations, windows out. It was heartbreaking,” she said.

It was a great feeling to be able to help the people there in need, she said.

Ernst said when a Jeep club gets behind a cause, they deliver.

“When a Jeep club gets behind something, it is just amazing the way people give,” she said. “It’s been a great group to be a part of.”